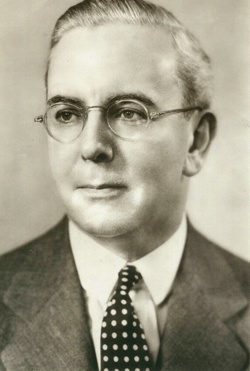 Emmet Fox was a New Thought spiritual leader of the early 20th century, famous for his large Divine Science church services held in New York City during the Depression. Fox was born in Ireland. His father, who died before Fox was ten, was a physician and member of Parliament. Fox attended Stamford Hill Jesuit college near London, and became an electrical engineer. However, he early discovered that he had healing power, and from the time of his late teens studied New Thought. He came to know the prominent New Thought writer Thomas Troward. Fox attended the London meeting at which the International New Thought Alliance was organized in 1914. He gave his first New Thought talk in Mortimer Hall in London in 1928. Soon he came to the United States, and in 1931 was selected to become the successor to James Murray as the minister of New York's Divine Science Church of the Healing Christ. Fox became immensely popular, and spoke to large church audiences during the Depression, holding weekly services for up to 5,500 people at the New York Hippodrome until 1938 and subsequently at Carnegie Hall. He was ordained in the Divine Science branch of New Thought (“Emmet Fox” Wikipedia).

The 2nd reference note in the Wikipedia entry on Emmet Fox links to an article by Igor S. (S Igor) about Emmet Fox's influence on Alcoholics Anonymous. Fox's secretary was the mother of one of the men who worked with Alcoholics Anonymous co-founder Bill W., and partly as a result of this connection early AA groups often went to hear Fox. S writes that it was the simplicity and power of basic principles of The Sermon on the Mount that drew alcoholics to Fox. According to Igor, Fox's teachings on God as the only power, that evil is insubstantial, love, forgiveness, living one day at a time, the trap of resentments and the correspondence of thoughts to the kind of life we live have contributed to an AA philosophy that has transformed the lives of literally millions of recovering alcoholics.

One interesting story about Emmet Fox and Unity School is described by Braden (:352). When Fox began attracting large crowds in New York he felt that since he was ministering he should be ordained. When he sought ordination from Unity School he was turned down by Charles Fillmore because he hadn't attended Unity's training program. Nona Brooks of Divine Science was quite willing to to waive the formal requirements and so Emmet Fox was ordained as a minister of Divine Science. This incident illustrates how individual New Thought churches and ministers will often wind up associating with one or another branch for reasons other than specific belief or teaching.

Braden (:355) underscores that the influence of Emmet Fox in the spread of New Thought ideas and emphasis lies not simply in the large number of his readers, but in the fact that he is so widely read by ministers of all denominations, who in turn are heard and read by the general public.

Most important works to read

This website http://emmetfox.wwwhubs.com/ is devoted to the life and work of Emmet Fox, which includes a document, “Emmet Fox Speaks,” http://emmetfox.wwwhubs.com/foxspks.htm a 29-page compilation of excerpts from Fox’s works. This document includes an excellent section on “Forgiveness,” which is taken from The Sermon on the Mount, and “The Golden Key to Prayer,” which has been published as a pamphlet by Unity.