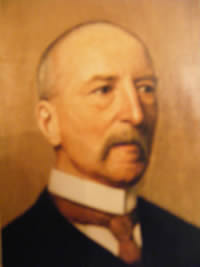 Thomas Troward was born in 1847 of British parents in India, where his father was a full colonel in the Indian Army. He was brought back to England in 1865 to attend school and the study of law. In 1869, at the age of twenty-two, he returned to India where he served as a judge for twenty-five years until his retirement at age fifty-five in 1902. He then returned to England where he devoted himself to the study of scripture, metaphysics and painting until his death in 1916 at the age of sixty-nine.

In 1904 he delivered the famous Edinburgh Lectures on the topic of Mental Science. These lectures became the basic pattern for his thought (Braden :416-7). The philosopher William James characterized Troward’s Edinburgh Lectures on Mental Science as "far and away the ablest statement of philosophy I have met, beautiful in its sustained clearness of thought and style, a really classic statement." In 1909 Troward delivered the Dore Lectures which are twelve lectures on a variety of subjects but which deepen one's understanding of Troward's teachings.

Theoretical basis behind philosophy of Science of Mind

In April of 1958, in addressing a group of students at the Institute of Religious Science Dr. Ernest Holmes stated that he had read every book that Troward had written because “they are the fundamental books, and everyone in our field should understand them because I would say twenty-five percent of our philosophy came from Troward.” (Sannar).

Braden says (:418-9) that Troward's ideas strongly influenced William James who characterized Troward's work as “far and away the ablest statement of the philosophy I have met, beautiful in its sustained clearness of thought and style; a really classic statement.” He also describes Troward's influence on a prominent clergyman, Archdeacon Basil Wilberforce of Westminster Abbey, whose sermons were constantly quoting Troward.

The great cosmic intelligence and the necessity for human cooperation

Braden (:421-2) describes Troward's belief that things which appear to have great “quality of livingness” seem to have great intelligence and that increased levels of intelligence provide increased control over motion, thereby reducing randomness and enabling the forward evolution of things. Our task, says Troward, is to consciously cooperate with the intelligence that is being expressed in law. He writes that it is a fact that “Nature obeys us precisely in proportion as we first obey Nature.”

Troward believed that human cooperation was done by both objective and subjective mind, or what we would today call conscious and subconscious mind. “The subconscious mind accepts uncritically whatever suggestion may be impressed upon it, and works out in great fidelity whatever may logically follow from the suggestion. For example, if a hypnotized person is told that he is a dog, he acts like a dog” (Braden :423). Braden's summary of Troward's teachings continues with his understanding of the individual personality and the “universal Life principle” (:424), the philosophic basis for denials (:425), the function of the healer (:426), “the silent power of evolution” (:427) and the relation of the person and Divine mind (:428).