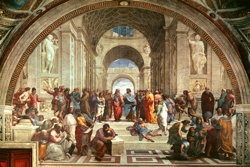 Western metaphysics and Judeo-Christian mysticism have been entwined since the time of Jesus. In fact, it may be claimed that Christianity was never free from the influence of the Greek philosophers. As much as we would like to think that the roots of the Christian movement are entirely grounded in the Jewish culture and religion, they were, at least from the time of the Apostle Paul, inextricably entwined in western philosophical concepts which we know as metaphysics. As we will see, it was the work of Plato, Origen, Meister Eckhart, Swedenborg, Hegel and Emerson that helped stabilize Christianity so that it could stand on the dual legs of metaphysics and mysticism, a religion of both the head and the heart. These thinkers are known as the Antecedents of New Thought and I discuss them in this section.

A drift to a domination of the heart

Theological conversations, like human conversations, can sometimes become one-sided. The influence of late 20th century psychology and twelve step programs, the rise of the New Age movement and the influence of the women's movement have shifted the head-heart conversation in favor of the heart. We live in a time where the analytical capacity of the head is all too often branded and depreciated as ego and the body is construed as an illusion of that ego. In many ways, New Thought has lost its grounding of the mind, which is body and soul, to a small part of the soul, known as the subconscious and felt as the heart. We need to rebalance the conversation.

Restoring the balance by a study of biography

Rebalancing the conversation won't occur by buttressing the voice of analytical thought, nor by deprecating the voice of the heart. To put it in good, western dialectical terms, we need a third voice. That voice is biography. Biography is both a study and a story. As a study of historical facts it appeals to our conscious intelligence. As a story it appeals to our myth-loving intuition. While we began in the first section with a heady exploration of the principles that define New Thought, we now continue with a series of biographies that convey those principles in the form of stories about how those principles came to be understood. It is from these stories that the subconscious desire of the soul to understand is satisfied.