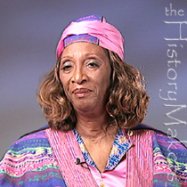 Barbara King was born in Houston, Texas to a father who was an activist who fought to bring African-American motion picture operators into the AFL-CIO. She was raised by a grandmother who provided spiritual and emotional fulfillment and strengthened King's self-confidence. Soon after enrolling at Texas State University in 1948, she was diagnosed with tuberculosis. While convalescing at a sanatorium she was introduced to the teachings of the Unity School of Christianity. Although doctors were skeptical that King would recover from her disease, she claimed that she was miraculously healed after hearing a radio preacher's instruction to put her hands on the radio (answers.com).

She eventually met and studied under Rev. Johnnie Colemon who inspired King to establish her own ministry. She completed her study and was ordained in 1971. She moved to Atlanta and, while a member of the faculty of Atlanta University, started a Bible study group. From this small group of 12 people, King began to create a ministry. By 1974 the Bible study group had grown into a church-sized gathering and by 1985 it had grown large enough to launch a fundraising campaign which was completed in 1991 with the large facility known as the “church in the round” with a reported congregation of 10,000 people. (Hillside Chapel Bio)