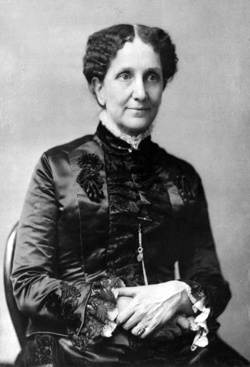 Mary Baker Eddy was the youngest of six children raised on a farm in New Hampshire. Because of numerous periods of sickness, she was given little formal education but she read and studied a great deal at home, writing prose and poetry from an early age. Raised in a deeply religious Congregational home, she rebelled against the Calvinist doctrine of predestination at an early age, and regularly turned to the Bible and prayer for hope and inspiration.

Struggling with chronic illness, she sought help from Phineas Quimby and her health improved dramatically under his treatment. She remained with Quimby for a number of years to learn more about his healing methods. In 1866 she was injured and found herself in critical condition. Quimby had died just one month earlier so she could not turn to him. At that point she asked for her Bible and, while reading an account of Jesus' healing, found herself suddenly well. She later referred to this as the moment she discovered Christian Science.

As you have read in the section on the Dresssers above, there has been significant controversy over whether Mrs Eddy's healing methods are derived from Quimby or if they are her own discovery, a controversy that was instigated by Julius Dresser and aggravated by Eddy's defensive response and her tenacious hold on the term “Christian Science.” Regardless of the validity of these criticisms, she is credited with the development of New Thought in three ways:

White, Judah and Albanese agree that Eddy “utilized more Christian categories than any other metaphysical organization” in her teachings (Judah, p.257). Albanese quotes scholar Stephen Gottschalk who characterizes Eddy's belief as “essential Calvinism” and “metaphysical dualism.” “In Christian Science as in Calvinism one is clearly confronted with the Pauline antithesis of the Spirit and the flesh.” (Albanese, p.290). Her teachings include acceptance of the Bible (as interpreted by Eddy), belief in Jesus Christ as the Son of God, that Jesus suffered for sins, belief in the crucifixion, the resurrection and the ascension of Jesus and the virgin birth. Eddy's interpretation of these Calvinist beliefs placed her outside the orthodox church, but she at least retained the basic beliefs.

Eddy was the first to establish a lasting organization despite repeated dissension and, 100 years after her death, it continues to be a strong, vibrant church. Many attribute her organizational success to her tenacity in defending her teachings and the trademark name “Christian Science,” however it may be that two other factors have been important: her adoption and reinterpretation of orthodox beliefs in lieu of outright rejection and her development of courses, classes and teaching to augment the work of healing practitioners.

To understand New Thought, we must also understand the reaction that New Thought can have on culture. I am including this video because it dramatically illustrates the emotionally charged reaction that metaphysical and New Thought thinking can elicit from the those in American culture. Most of us have learned that American culture honors the "self-made man" who "pulls himself up by his bootstraps." We envision that American culture is a land of opportunity for those who work hard. Few people represent American culture better than Samuel Clemens (Mark Twain), especially as portrayed by Val Kilmer in this video. Click here for more information on Val Kilmer's obsession for both Mark Twain and Mary Baker Eddy. Click here for more information about this film.

Braden (:138-149) discusses how Eddy trained two important people who subsequently made tremendous contributions to New Thought. Gesterfield's work is outside the scope of this study. Hopkins is discussed in the next section.