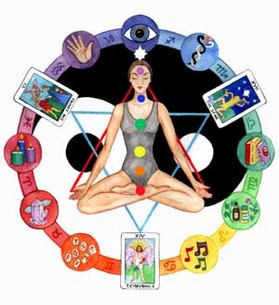 J. Gordon Melton (:16-29) describes a few characteristics of New Age and then describes how New Thought and New Age have worked in a somewhat symbiotic relationship.

While New Age is a term that covers a broad group of groups, Melton identifies various aspects of New Age, based on similarities found in New Age literature:

Other Perspectives on New Age

My own take (Mark Hicks speaking here) is that New Thought has a systematic theology (metaphysics) and it can function in a traditional, modern and post-modern worldview, whereas New Age is a bag of UNsystematic beliefs that came about as a rejection of science and modernism and can only live in a post-modern worldview. I've been tremendously influenced by Huston Smith in forming this opinion. Here is what Huston Smith says in Why Religion Matters (p161):

"Because they lack seasoned guides, their unbridled enthusiasm for the Aquarian Age careens crazily, and conceptually the movement is pretty much a mess... Flaky at the fringes and credulous to the point of gullibility — an open mind is salutary, but one whose hinge is off? — The New Age Movement is so problematic that I would gladly leave it alone were it not for the fact that it has two things exactly right. First, it is optimistic, and we need all the hope we can get. Second, it adamantly refuses to acquiesce to the scientistic worldview. Instinctively it knows that the human spirit is too large to accept a cage for its home."

So, fundamentally, New Age is a hodge-podge of things that center around a post-modern worldview. New Thought can be post-modern as well, but it at least has a structured theology (Mind, Idea, Expression) that holds it together.

Rodney Stark distinguishes New Age as a market (that has an audience) rather than being a movement (that has believers). In The Churching of America, he and collaborator Roger Finke write, "We believe that most people who can in any way be said to have responded to the New Age movement regard it as more of an amusement than a religion ... But audiences do not constitute movements." (pp. 239-40). The demographics of this New Age audience is described by Stark in What Americans Really Believe as being somewhat privileged people who are highly educated and who are "searching for a sense of the supernatural that is lacking in their 'home' denominations" (p. 135).

Eric Butterworth on The Occult (selected clips) (Antecedents: The Occult)