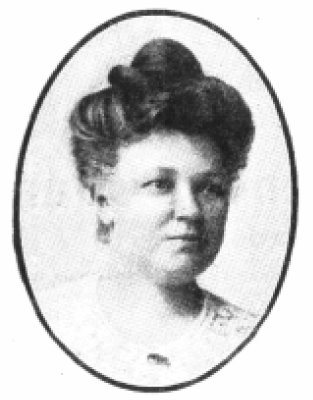 Annie Rix Militz (1856-1924) was another student of the “teacher of teachers,” Emma Curtis Hopkins. During her study with Hopkins, she was healed of deafness of one ear and, after the third day of the class told her sister, Harriet Rix, that she had found her life-work.

She had been a school teacher in San Francisco and, after the class with Hopkins, left school teaching and joined with the owner of a metaphysical bookshop in San Francisco owned by a Mrs. Gorey. The store gave Militz the opportunity to read a wide variety of spiritual books, which left her with an appreciation for the diverse pathways to spiritual development. The bookstore grew from a one-room shop to eventually take over the entire building, giving them the opportunity to hold classes. This eventually was named the “Home of Truth” and Militz continued there for three years until she was called by Emma Curtis Hopkins to teach with her in Chicago, which she did until 1896.

International evangelist for the Truth of God is all

When she left Chicago, Militz started another Home of Truth in Los Angeles. It was there that she started publication of a successful magazine, Master Mind. This extended her influence far beyond Los Angeles and she became sought as a lecturer and teacher. Militz's name appears time and again in Braden's account of the INTA; she traveled internationally and at one time entirely around the world, speaking on behalf of New Thought. Her message was consistent and clear: “that God the Good is All in All, the only power and intelligence … there can therefore be no reality, no truth, power or intelligence in materiality, sin, evil, sickness, poverty, sorrow or death.” (:315)

John Simmons wrote a scholarly article, The Forgotten Contribution of Annie Rix Militz to the Unity School of Christianity, that introduced Annie Rix Militz as a key figure in the formative years of Unity, from 1893 until 1910. Militz was ordained with the Fillmores at the Hopkins Theological Seminary in 1891. In 1893 Unity published an article by Militz entitled “Manifestation of God Through Judas Iscariot,” which spoke of Judas as the metaphysical name for the same generative center that Charles Fillmore would later refer to as one of the twelve powers. Simmons then described the “long intellectual relationship between her and Fillmore.” Other books by Militz followed, including The Renewal of the Body, a piece on regeneration of the body and a long series of Bible lessons which were expanded into Primary Lessons in Christian Living and Healing, printed by Unity for over a decade.

Growth of Homes of Truth

In 1910 Militz shifted her focus to the establishment and growth of Homes of Truth. By the time of her transition in 1924 there were dozens of such homes, from San Diego to Vancouver and in a dozen other cities across the United States. Braden explains that she never established a tight organization (:315). The Master Mind journal was carried on by her sister for a time but eventually the publication and all but one of the original churches disappeared. The sole remaining church is in fact the second church, in the original building, located in Alameda, California. The website for this church is at: http://thehomeoftruth.org/

Annie Rix Militz
None of These Things Move Me (tract)
New Thought Branches: Homes of Truth and Annie Rix Militz
The Sermon On The Mount – An Interpretation
Generation and Regeneration