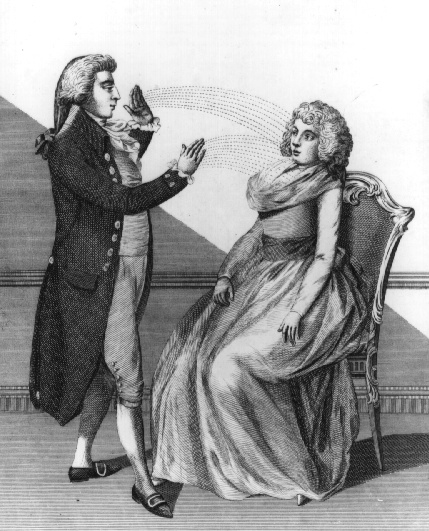 The origin of the term “mesmerize” dates back to Franz Anton Mesmer, an 18th century physician in Vienna who founded a therapeutic movement called mesmerism. Mesmer proposed the existence of an invisible fluid in the body that reacts to the gravitational force of the planets (“The History of 'Mesmerize' and 'Hypnotism'”). Human health, said Mesmer, is affected by the interaction between this invisible fluid and the planets. He called his theory “animal gravitation.”

A few years later Mesmer shifted his attention from gravity to magnetism. Animal gravitation became animal magnetism. The body’s invisible fluid, Mesmer now claimed, obeyed the laws of magnetism, and could be manipulated by any magnetized object. Stemming from this theory, Mesmer based his medical practice on the notion that disease resulted when the flow of the invisible fluid through the body became blocked. To unclog the fluid Mesmer devised treatments that involved putting his patients in trance-like states. (“Franz Mesmer” Wikipedia)

Although mesmerism is now classified alongside other pseudo-sciences such as alchemy and phrenology, its use eventually led Scottish surgeon James Braid to develop hypnosis in 1842. Charles Braden (:40-44) says that Braid confirmed that the phenomenon was genuine but concluded that no fluidic theory was necessary to account for it; that it was really only the result of suggestion. Braden concludes that this may well be said to the the beginning of scientific psychotherapy.

According to Braden, the discoveries of these early investigators led to the conclusion that many so-called physical disorders were mental, and could therefore be cured by nonphysical, non-chemical, non-medicinal means. They labored hard to discover the cause of the disturbance and employed what would become psychotherapy as a means of treatment. But Braden notes that, for Christian Science and New Thought healers, the diagnosis was unnecessary. If all disease is unreal or non-existent, it doesn't really matter which one of the unreal diseases the practitioner is called upon to treat. Disease may appear to be real but it was in fact all a matter of wrong thinking.

Despite a lucrative practice and apparent success at curing certain nervous disorders, Mesmer was accused of fraud and forced to leave Vienna in 1778. He reestablished his practice in Paris, but soon came under suspicion there as well. Officially labeled a fraud by a scientific commission including American inventor Benjamin Franklin, Mesmer lost his practice and the mesmerist movement faded away.