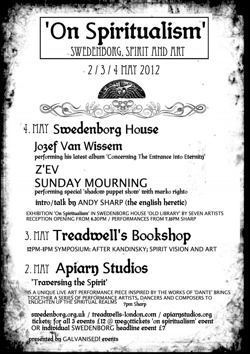 Both Judah (:51-91) and Albanese (:220-253) have extensive sections on Spiritualism, or communication with the dead. Braden, concerned with New Thought, rather than the larger focus on metaphysical religion, does not discuss Spiritualism.

As Judah notes, the practice of communicating with the dead goes to ancient times and is found in many cultures. However in America Spiritualism can be traced to rappings heard in Hydesville, New York, in 1848, in a small house reported to be haunted, and inhabited by the Fox family with three daughters, Leah, Margaretta and Kate. Judah says “the rappings at Hydesville were a sound heard around the world. Much publicity was given to them in the press, and people came from far and near to witness them” (:57). As Spiritualism developed, many different kinds of mediums appeared, exhibiting a wide variety of physical phenomena, all based on the supposed presence of disembodied spirits. Many mediums were caught in fraudulent practices and some confessed. The most dramatic and important confession was that of the Fox sisters who revealed in 1888 that they had colluded in making the rapping sounds with their feet to scare their mother.

Spiritualism as a movement

A major reason the rappings in Hydesville spread so quickly was the work of Andrew Jackson Davis (1826-1910), who is said to be the philosopher of American spiritualism. Davis was also familiar with the work of Mesmer and the philosophy of Swedenborg and he apparently had clairvoyant powers that allowed him to peer into the spiritual planes beyond the physical.

Although Davis' main contribution to Spiritualism was his philosophical writings, he, like Quimbly later, developed a healing practice. This attracted the notice of Quimbly, who, according to Albanese (:286), was quite familiar with the writings of Davis. She writes that Quimby attended seances frequently and declared himself to be a “healing medium.” However Quimby admitted that what generated “mesmeric success and spiritualist manifestation” were not “elementals” but simple human belief and opinion.

Braden notes that in the first issue of Unity's original publication, Modern Thought, the Fillmores were quite interested in a variety of occult practices, including Spiritualism (:332-3). However Charles Fillmore, without condemning the practice, soon questioned its usefulness. In an April 1928 article in Unity Magazine (p.302) he explained “The principle objection to Spiritualism as a cult is that it advocates communion between souls that are in the body and souls that are out of the body, assuming that souls out of the body have super-wisdom. Those souls that are out of the body do not know any more than they did when they were in the body; consequently they are unsafe guides. Dying does not change the mind; it simply changes the form of environment from the physical into the psychical.” Albanese (:328) says that “Fillmore had gone beyond spiritualism, but clearly he regarded spiritualists as metaphysical cousins who had gotten things at least half right.” His principal objection to the Spiritualists, Albanese says, was their “tendency” to “materialize the spirit world, instead of spiritualizing the material world.”