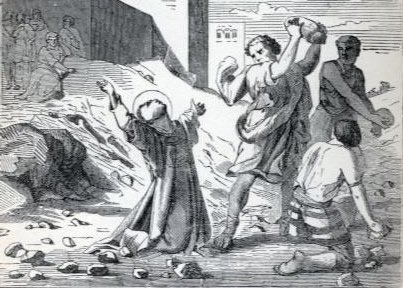 Stephen was the first Christian martyr. He was one of the seven appointed to serve tables in Jerusalem (Acts 6:5) to allow the apostles time to devote themselves to spiritual matters. He went beyond this assignment to preach to perform healings. His preaching was so zealous that he was sent to the authorities, where he gave a great discourse about the irrelevance of the Temple and that the Jews had killed Christ. This so incensed the public that they took him out and had him stoned apparently without formal trial.  It is not surprising that Stephen is one of the most popular of the saints. There is something about martyrdom that appeals to our human (not divine) nature.

Stephen was enlightened. The word "Stephen" means encircle with a crown, such as a victors wreath. Crowns are worn on the head, and the head is the seat of the intellect. Therefore Acts 6:8 means that the intellect has been enlightened and who gets intellectually a clear understanding of the truth of man. The heavens are opened to him; one who has had this experience can see the possibilities of man, far beyond what has been demonstrated.

But it was zeal without wisdom.  In short, Stephen was an enthusiast.  He was, what Eric Butterworth called, “over read and under done.”  He had great intellect and was in fact able to perceive spiritual realities.  The problem, according to Charles Fillmore, is that what he sees seems so real that his visions become a moving factor in life and one goes forth preaching them, talking about them as if they had really come to pass, as if all had been demonstrated.  In short, he lives in his head, but has no wisdom in his body.  Stated another way, Stephen had zeal without wisdom.

Zeal is one of the twelve powers. Located at the base of the brain and represented by Simon the Zealot, zeal provides enthusiasm, intensity and exuberance; our inner urge to progress; it is our motivation to achieve. Without zeal, stagnation, inertia, death would prevail throughout the universe. Zeal, when applied to the expression of some divine ideal, is expressed as genius. Although we recognize genius in great people like Mozart and Shakespeare, Charles Fillmore reminds us that we are all called to express the same genius of Jesus Christ, who applied zeal to all his faculties.

The problem with zeal is that it is indiscriminate; zeal works to drive forward whatever manifestation it inhabits. Being indiscriminate, zeal must be tempered with wisdom and this is true even for zeal operating at the spiritual phase of mind.

Wisdom is another of the twelve powers.  Also known as judgment or discrimination, wisdom is the faculty by which we appraise, evaluate, and discern in order to make correct decisions.  It is our ability to know what is best for us.  Anyone who has gone off and eaten a pint of ice cream late at night has lost their faculty of wisdom for the moment.

Fifth Unity Principle applies here. The fifth Unity principle says “Knowing and understanding the laws of life, also called Truth, are not enough. A person must also live the truth that he or she knows.”  Putting what we know into practice requires both zeal and wisdom.   Filled with zeal, but without wisdom, Stephen became argumentative, and this got him killed.   When we are also zealous and without wisdom, we take on too much, become “too spiritual,” become “over read and under done.”  The spiritual journey is a lifetime journey.  Take it easy on yourself.