The entry for Paul in the Metaphysical Bible Dictionary says his name comes from Latin and means restrained, constrained; lessened; made small; little. This is surprising, given that he wrote many letters of the New Testament (but not all that are attributed to him) and that he is most responsible for the Christ message reaching the  Gentile (non-Jewish) world.  There are three things we need to know in order to understand Paul, both historically (Crossan :x-xiv) and metaphysically (MBD :506-7).  These are his mission, his strategy and his vision.

Paul's mission for conquering Rome (the will and intellect).  Luke, the writer of Acts of the Apostles, makes it appear that Paul's mission was to convert the Jews who lived outside of Israel. This is a distortion made for political expediency at the time the book was written. We learn from Paul's own letters that his actual mission was to the Roman Gentiles (non-Jews).  When Paul declares in Acts 25:11 “I am appealing to the emperor,” he is not just talking about the unjust treatment he has got from the political system, he truly believes that he can demonstrate to Rome the Truth of the new world order that has come into his consciousness.  This shows the true missionary zeal of Paul. When the governor says “You are out of your mind, Paul!” Paul replies “I am speaking the sober truth” (26:24).  Paul, like Jesus before him, questioned the entire world order as it appeared at that time. Rome was not just a political empire but rather a civilization, which provided people an entire set of beliefs and rules that established what is normal.  And, Paul, having become conscious of a new order of being, set out to challenge that civilization. As Jesus had proclaimed that the reign of God challenged the normalcy of the Jewish religion as it was being practiced, Paul so challenged the reign of Caesar.

The metaphysical equivalent of challenging Rome is challenging the reign of the will and the intellect (or understanding) in consciousness.  The MBD says “the entrance of Paul and his companions into Europe is symbolical of opening up the word of Truth in parts of consciousness where it has never before been realized (:506).” These new areas of opening are the will and the understanding, two of the Twelve Powers, which are often experienced in the front forehead.  Paul's original name, Saul, comes from the central idea that we use our will to attain that which we need.  As Roman civilization used will to impose it's rule over conquered people, so do we, in consciousness, attempt to use our personal will to impose ourselves over things in the physical world. A central message of Paul is that the will, when it is “acting in harmony with divine law, is gentle” (MBD :506).  This is why the metaphysical Paul is restrained, constrained; lessened; made small; little.

Paul's strategy of missionary journeys (journeys into the depths of the soul). In the Acts of the Apostles we learn that Paul embarked on three journey's throughout present day Turkey and Greece to convert the Jews who lived outside of Israel. But we know that Paul's true focus was on the Gentiles. What he was actually doing, according to Crossan and Reed, was convert poaching (:38-40). While it is true that Paul's base of operations was the Jewish synagogue, he went there, not to convert Jews, but to convert Gentiles who had been previously converted to a luke-warm form of Judaism, those who he referred to as “God-worshippers.” Converted Gentiles were low-hanging fruit for two reasons – their familiarity with the Jewish message made it easy for Paul  to convey the Christ message and also their resistance to the restrictions of Jewish customs (especially circumcision) made it Paul's Christ message more practically appealing.

The metaphysical understanding of Paul's journeys is explained by Elizabeth Sand Turner.

spiritually interpreted, Paul's missionary journeys represent the activity of the word of Truth in the mind and heart of the individual … even as the mission of Paul was to spread the Christ teaching throughout the world of his time, so it is the mission of our awakened consciousness to redeem our entire being. 'Go into all the world and preach the gospel' is the Christ command. When our soul is afire with the Christ light, we enthusiastically preach His gospel throughout our individual world of mind and body (:64).

We see a pattern in the journey when we read about these journeys in the Acts of the Apostles (chapters 13-20), in Be Ye Transformed (:64-111) and in the entries for each city he visited in the Metaphysical Bible Dictionary.  Paul's strategy is to convert that which can be converted (God-worshippers) and to avoid that which is closed to the word of Truth (such as Athens and the Jews).  Metaphysically, Paul is building faith for the eventual conversion of the entire soul.  This pattern is useful for our own spiritual development – when we open our soul in areas where we are ready, and, with non-resistance, to allow God to work, and keep in consciousness the truth that although were are not yet perfect expressions of our divine nature, we will one day be fully in harmony with divine law – then we are truly “preaching the Gospel.”  The MBD says this about Paul's strategy, “when guided by Spirit we are led to develop along the lines of least resistance and where the conditions are most favorable” (:507).

Paul's vision for a new reign of God (Oneness with all in Spirit). To learn of Paul's vision for a fully converted Roman civilization we must look to his letters.  But this can be a problem, because many of the letters attributed to Paul were written by others (we are confident of this because the grammar, vocabulary and logic of these other letters differs so much from those we know are written by Paul). Here is a passage from the Letter to the Galatians, which is certainly from Paul. 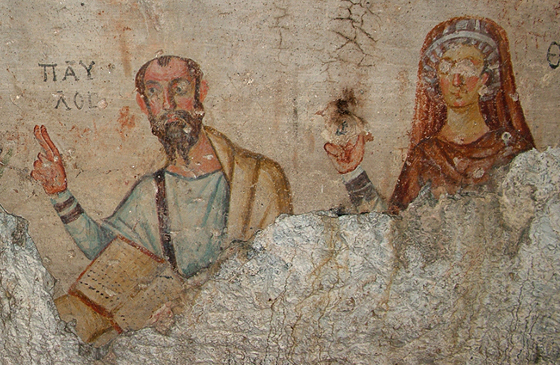 Just as Jesus had preached to tax collectors and prostitutes, Paul was happy to work with any who would receive the Christ message. For Paul, there was no social hierarchy within the body of Christ. In contrast to Roman civilization, Paul actively sought partnership with women, slaves, Jews and Gentiles. Crossan and Reed point out that the picture shown is of Paul and Theoklia, partners in leading the Christian community in Ephesus, and they are of the same height, with the same raised hand of blessing and the same open, perceptive eyes. This fresco is additional evidence of Paul's true vision of a classless social order in the body of Christ.  Someone, however, has scratched out the eyes and hand of Theoklia, defacing her image and reducing her status to subordinate to Paul. This same reduction in power was perpetrated by the writer of Ephesians 5:22 who wrote “wives, be subject to your husbands as you are to the Lord.”  Paul, contrary to what some of the writings attributed to him may suggest, was perhaps as radical as Jesus in his vision for an open, non-hierarchical society.