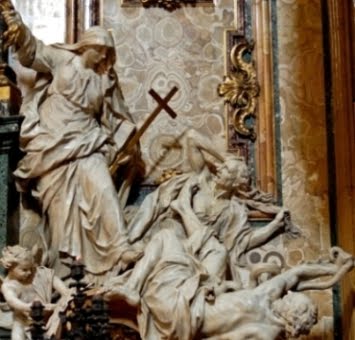 The remaining five letters of the New Testament – The Second Letter to Peter, the Three Letters of John, and the Letter of Jude – were written in opposition to the work of certain traveling teachers who have spread false ideas and ideas of “immorality” in Christian churches. They are perhaps the latest of the New Testament writings, most likely having been written between 90–110 CE.

What is a false teaching?  It may be that there is truly only one false teaching: that which leads to a consciousness of separation from God and from the world. The term religion derives from the Latin ligare which means  "to bind, connect" and, with the prefix re (again), forms re-ligare, "to reconnect." Religion connects us to God and overcomes separation. Heresy is any teaching that causes a sense of separation. The picture shown to the right is part of a sculpture by Pierre Legros and is appropriately entitled “Religion Overthrowing Heresy and Hatred,” which is exactly what religion does.

The fundamental metaphysical construct of Mind-Idea-Expression is a form of binding or bridging all Reality from the ineffable God-Mind through spiritual, Divine ideas to the manifest expressions of those ideas in our physical world. This implies that, at least from a metaphysical point of view, any form of teaching that denies the reality or at least the potential goodness or divinity of physical expression is by definition a heretical teaching. While it may be true that physical expression is always changing and perhaps its appearance is disconcerting, it always possesses the potential to manifest what philosophy has called “the good, the true and the beautiful.”

As a side note, the term spiritual most commonly refers to that which is immaterial in reality. Those who express a preference for being “spiritual, but not religious,” may be mistakenly declaring that they enjoy living in a Divine world of thought but have no interest in connecting these beautiful thoughts to their physical reality.

What is Truth?  If false teaching is a consciousness of separation, then Truth is a consciousness of only one reality, the nature of which is good. In Unity, we know this as one power, one presence, God the good. Charles Fillmore defines the basic principle of Truth as “that the mind of each individual may be consciously unified with Divine Mind through the indwelling Christ ... by affirming at-one-ment with God-Mind, we eventually realize that perfect mind which was in Christ Jesus.” In summary, we may assume that any teaching that denies at least the possibility of full physical expression of the perfection of God is not in accordance with Truth or the truth principle.

The Letter of Jude.  The Letter of Jude has only one chapter of 24 verses. It is a letter written to address the the danger of the false teachings of someone who has come into the community and taught that the moral law is unnecessary. Turner (:191) implies that the false teaching so over-emphasized faith over the law that there was little regard for ethics at all, which led to dishonesty, injustice and greed.  The reason these qualities are considered heresy, and not just unethical, is that they are rooted in a belief that what matters is Mind and Idea, but not Expression. In other words, dishonesty, injustice and greed only exist in a consciousness of separation.

Jude was one of the twelve disciples of Jesus and was also known as Thaddaeus (Matt. 10:3; Luke 6:16; Jude 1).  Metaphysically, Thaddaeus (or Jude) represents our ability to release false beliefs and to accomplish a mental cleansing. We may read the Letter of Jude to strengthen help us release any sense of separation from God or any sense of the reality of evil.

The Second Letter of Peter.  This letter is probably the last part of the New Testament to have been written, probably between 90-110 CE (recall that 1 Thessalonians was the earliest).  We don't who wrote this letter, but the three chapters of this letter are quite similar to verses 5 through 16 of the Letter of Jude.  In fact the theme and content is almost identical to that of Jude.  It is a fierce attack on false teachers, resorting at some points to crude proverbs and prophesies that God will deal with these teachers as God dealt with Sodom and Gomorrah. An example of this diatribe is:

These are waterless springs and mists driven by a storm; for them the deepest darkness has been reserved. For they speak bombastic nonsense, and with licentious desires of the flesh they entice people who have just escaped from those who live in error. They promise them freedom, but they themselves are slaves of corruption; for people are slaves to whatever masters them (2:17-10).

The reference to “waterless springs,” is an image which emphasizes that, metaphysically, false teachings are incapable of producing a flow of Divine ideas. This may be the most useful phrase of the letter for our spiritual understanding.

The First Letter of John. This letter is written in the same style, vocabulary and theological perspective as the Gospel of John. These two, together with 2 John, 3 John and The Revelation to John form what are known as the Johannine books of the New Testament. The letter addresses false teachings. The nature of these false teachings is unclear, but we can assume from the counter argument of the letter that the writer believed they conveyed a distorted sense of the nature of love and an incorrect sense of the nature of light and darkness. To refute these errors, the writer says “whoever says, 'I am in the light,' while hating a brother or sister, is still in the darkness” (2:9).  These themes of love and light indicate that the probable false teaching was Gnosticism. Gnosticism taught that darkness had a separate existence from light (was not just an absence of light) and therefore taught a form of separation. Gnosticism also taught that overcoming darkness required secret knowledge; the writer of this letter counters that argument by saying that overcoming darkness requires love.

While the specific metaphysical problem with Gnosticism is duality (teaching the consciousness of separation), the practical implication of this teaching is elitism,

the belief or attitude that some individuals, who supposedly form an elite — a select group of people with, intellect, wealth, specialized training or experience, or other distinctive attributes — are those whose views on a matter are to be taken the most seriously or carry the most weight or those who view their own views as so; whose views and/or actions are most likely to be constructive to society as a whole; or whose extraordinary skills, abilities or wisdom render them especially fit to govern (Wikipedia).

Elitism is most commonly expressed today by those who claim a higher or more evolved state of consciousness. This is, of course, just another form of a consciousness of separation. The prescription for this metaphysical and practical problem is love, which is impossible for one with a consciousness of elitism to express.

The Second Letter of John. As Turner points out (:189), the Second Letter of John is the shortest book in the Bible, a letter written to a women and her family to warn against false teachings about Jesus only “appearing” to be fully incarnated “in the flesh.”  This implies that the false teaching was Docetism, which comes from the Greek word dokeo, (“to appear”), and which says that Jesus only appeared to be human.

Metaphysically, the error in Docetism is that, by denying that Jesus was fully human, we hold that Divine ideas from God-Mind are never expressed physically. In other words, Docetism holds that physical expression is always separate from the perfection of God-Mind and Divine ideas.  Docetism may be recognized today by thought systems that characterize all physical embodiment as illusions of the mind or some aspect of the mind, such as the ego.  Metaphysics, as developed by New Thought, has never denied the expectation that physical embodiment is, rather than being an illusion, both one with God-Mind and also carries the essence of divinity.

Metaphysically, Gaius represents “the acceptance by the body consciousness (of the earth, earthy man) of the truth pertaining to the divine law, or Lord. This acceptance of Truth by the seemingly earthy phase of man's being works with Paul (the activity of the word of Truth) in bringing about the redemption of the body; great gladness and rejoicing are thus realized by the individual.”