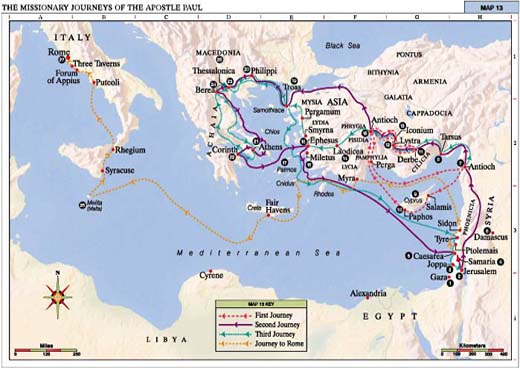 This chapter summarizes metaphysical interpretations of second half of The Acts of the Apostles, chapters 13 through 28, gleaned from Elizabeth Sand Turner's Be Ye Transformed and the Metaphysical Bible Dictionary.   I've previously said that there is a pattern to be found in the journey's of Paul, which is to convert that which is ready to be converted and to avoid with non-resistance that which we are not yet able to to change. This is a good strategy for any of us on the spiritual path.  There is, however, an even more detailed pattern to be found in these stories.  Look for the following:

Acts 13-15.  First Missionary Journey and Jerusalem conference.  Paul's companion on this journey is Barnabas, the man who defended Paul many times and who, metaphysically, is “the imagination brought into expression through association with the word of Truth (Paul).” 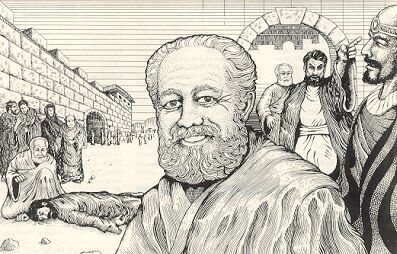 Barnabas knew how to encourage people, to speak to them in ways that made them comfortable and inspired. He was fair and open-minded, likeable and imaginative. The MBD says Barnabas was “the right companion for Paul, who represents the word of the Spirit of Truth … Spiritual imagination and fairness of mind cause us to realize and acknowledge the changes that take place in our thoughts as we turn from the fighting, resisting attitude to one of receptivity to Truth” (:98).

The journey starts out in Cyprus, “a fair, frank, honest, just, unbiased state of mind” which is where we need to be as we begin our spiritual journey. They quickly made their first convert, Sergius Paulus, the Roman ruler of Paphos, who represents the “reasoning faculty in man searching for things of Spirit” (MBD :583).  The journey continues in present-day Turkey, where they meet resistance in Antioch, where religious thoughts are antagonistic to deeper truths, then on to Iconium, where the emotional aspects of our soul can be a problem, to Lystra, where Paul's provocative preaching fomented resistance, and finally on to Derbe, a place where wounded feelings led to receiving the word of Truth.

The journey concludes with Paul and Barnabas going to Jerusalem to defend the idea that in Christ one is not subject to the formalities of Jewish law.  Turner comments that “this decision represents the activity of judgment … which reveals that it is the spirit of the law which is essential, not the letter of it” (:74). 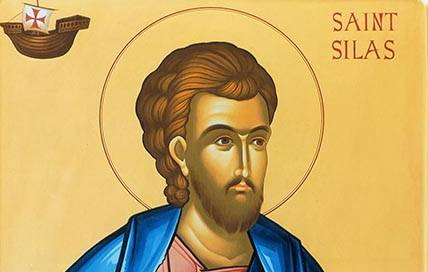 Acts 16-18.  Second Missionary Journey. Paul's principle companion on this journey is Silas, which means “wooded” and he represents “a rugged state of mind and understanding” (BYT :75).  They are later accompanied by Timothy, who had a Greek father, representing intellectual reasoning and a Jewish mother, representing the spiritual qualities of faith and love. These companions help us see how our soul shifts from its need for the simple encouragement of Barnabas to a deeper and more complex need for strength, critical reasoning, faith and an opening of the heart.

Meta. The rugged state of mind (woody) that goes well with the Paul consciousness (Acts 15:40).  In Acts 16:25 Paul and Silas represent the will and the understanding in their work of clearing up the consciousness.  The verse, “But when Silas and Timothy came down from Macedonia, Paul was constrained by the word, testifying to the Jews that Jesus was the Christ” (Acts 18:5), is explained metaphysically as follows: When fired with perception (Silas) from on high, and with zeal (Timothy), and the fervor of the soul (Macedonia), Truth is pressed by the word to proclaim that Jesus (I AM) is the Christ (the saving power).

It is on this second missionary journey that the Paul and Silas cross over from present-day Turkey to Europe (northern Greece), a deepening of the faith journey in consciousness in to new territory. In Philippi, they poached a wealthy convert woman named Lydia and healed a slave girl. We see the boldness of Paul and Silas when they are arrested and mistreated by the negative reaction of the slave girl's owner and the authorities, an indication that the journey is leading to chemicalization and spiritual growth. The journey continues with visits to Thessalonica, Beroea, Corinth and Ephesus, where similar events occurred – poaching, healing, physical reaction, chemicalization and growth. Note that Thessalonica, metaphysically interpreted, is a major feeling center, “the burning or heated zeal of the soul in its desire for Truth, but at this phase of unfoldment it is without a sufficient thinking balance to give tolerance and wisdom” (MBD :653).

Acts 19-20. Third Missionary Journey.  Paul embarks on his third journey by himself, an indication of how own spiritual self-reliance. Most of the content of this part of Acts is concerned with the city of Ephesus, which, according to the MBD represents a sense state of consciousness of desire. Paul's work in Ephesus is primarily healing and, metaphysically, the healing is of the appetite of the body.  From Ephesus, Paul continues his journey, revisiting cities in Macedonia and Greece, then returning to Jerusalem, where he will be arrested and ultimately sent to Rome.

Three Missionary Journeys as missions to head, heart and body.  If we revisit the stories in these three missionary journey's of Paul and his companions, we can discern that they appear to be attempts by the word of Truth (Paul) in consciousness to convert to Christ consciousness areas represented by the major centers of the visit: head (Cyprus), heart (Thessalonica) and body (Ephesus). We may then glean from these stories an understanding of how our own spiritual unfoldment may occur.

Acts 21-28. Paul's arrest in Jerusalem and trial at Rome. Like Jesus before him, Paul is aware of the danger of bringing the word of Truth to Jerusalem, a city dominated by the formalities of Jewish law.  The MBD says he proclaims the I AM doctrine because, at this point in Paul's development, he knows only Truth (:507-8). Metaphysically, this means that Truth cannot be held hostage. Paul will be held for two years in Caesarea and then sent to Rome for trial.  In Caesarea and in Rome he is treated well and given some freedom to continue his ministry. The Acts of the Apostles ends with Paul awaiting trial.  Later sources, written about 30 years later, say Paul was released in Rome, traveled to Spain, and was later martyred by Nero in Rome in 67 CE.