Unity Magazine October 1918 - The Day of the Harvest

Every soul is under obligation to bring about our Father's business 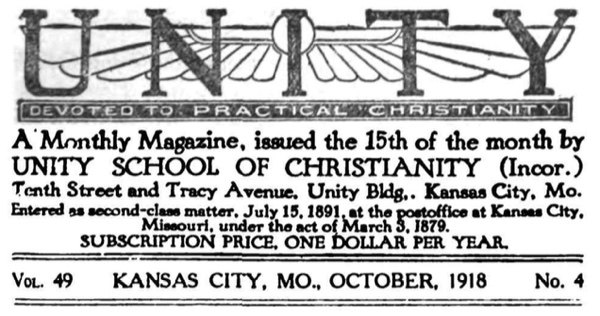 I hope this message is a blessing to you.

Download a PDF for saving or printing this page

THE DAY OF THE HARVEST

“At therefore the tares are gathered up and burned with fire; to shall it be in the end of the world. The Son of man thall gather oat of hii kingdom all thing* that cauie (tumbling, and them that do iniquity, and thall cast them into the furnace of fire: there' shall be the weeping and the gnashing of teeth. Then shall the righteous shine forth at the tun in the kingdom of their Father. He that hath ears, let him hear.” Matt. 13:40-43, R.V.

EVENTS in the adjustment of the race consciousness, now taking place in the earth, testify the day of the harvest is at hand. Jesus designated this day as the “end of the world.” Christians all through the ages have been inclined to believe that this end would be brought about by the wrath of God. Wrath is unknown to God, the Omnipotent Good, the Principle of Peace and Love. “A good tree cannot bring forth evil fruit, neither can a corrupt tree bring forth good fruit.” The Principle of Harmony does not produce disaster, neither can the Omnipotent Principle of Good produce evil. The cause of all inharmony lies in the seed idea that produced it. Man nourishes this seed in his heart as thought, and it brings forth a harvest in exact conformity to the character of the seed.

Sowing and reaping are not confined in their results to individual experience. The substance of the thoughts of men radiate out into the world and make up the universal atmosphere, collectively known as race consciousness. It is as impossible for the individual to bless or curse himself without blessing or cursing humanity, as it is impossible for the heart to be stimulated to greater activity and the lungs remain unaffected. There is a free circulation of thought continually going on in the race consciousness, and the individual takes on and gives off according to his state of mind. If ideas of purity, righteousness and harmony dominate in individual mind, the person becomes a constructive working factor in establishing the kingdom of heaven (harmony) in the earth; and at the same time he attracts to himself both from the inner consciousness and the universal only that which is harmonious and good. Because of the operation of this universal mind action, metaphysically called Law, minds that are intent upon the acquisition of gross, material things, minds that are filled with corresponding gross ideas, do not reap good where others have sown the good seed, but instead they are under a law of adversity set up because their thoughts are adverse to the Omnipotent Good Principle. As a result, they reap all sorts of adverse things. God b not to blame for this state of affairs. God does not behold iniquity, neither does he present a remedy for iniquitous conditions.

Man instinctively prays in times of trouble, but the effective prayer must have as its basis the Truth that all that he desires is already established unto him. Man unconsciously makes this acknowledgment when he turns to God for help, for in this act of faith he acknowledges that God (Good) is supreme over the error that besets him.

There is no chance or “accidental happenings” either in individual or race consciousness. If a student of Truth carries along some pet indulgence, in spite of the Law which decrees that harmony and perfection must prevail, he will reap much warped and bitter fruit, however intense his desire may be to reap only that which is good. “God is not mocked; whatsoever a man soweth that shall he also reap.”

Man is always master of his harvest. He determines the character of his fruits in the way he handles every proposition that presents itself. Every suggestion of action must be balanced with Principle in the same manner as thoughts in the abstract are balanced with Principle, if one is to reap harmonious expression in the manifest world. If hard experience comes, because of thoughts heretofore established in consciousness, man should rest in the conviction that the law of the Spirit of Life in Christ now sets at naught the law of karma. Through the power of the present thought, man can offset the effect of past thinking, and at the same time lay the foundation of his future harvest.

In chemistry, two elements of dissimilar character do not harmonize, but are said to be antagonistic to each other. So in the great universal chemistry of Mind, thoughts of good and ill are antagonistic to each other, and eventually the inharmony is brought to the surface in order that purification may take place. This period, either in the individual or the race, is the “day of harvest,” and marks the end of an order of thought. When the consciousness of the individual, or of the race, has been purged sufficiently of “all things that cause stumbling, and them that do iniquity” for the Good to become dominant, a new consciousness is established. Universal regeneration is the sum-total of individual regeneration.

All through the ages godly men have appeared, who radiated into the earth the substance of their rich thought. The holy ideas of godly men are the angels sent forth by the Son of Man. In the last half century hosts of true thinkers have arisen, and through then thought influence the underlying Good forced itself to the surface, and evil, as a consequence, expressed itself in visible chaos and riot. The wise student does not attempt to prolong the universal struggle for supremacy between error and Truth, now going on in the earth, through attaching himself in thought to the various incidents of the day, but schooled in the knowledge of the working of the law of creation, keeps his mmd centered and poised in that which he would see manifest in the earth. “Greater love hath no man than this, that a man lay down his life for his friends.” Man lays down his life when he lets go of personal opinions, ambitions and desires, petty convictions, race prejudices, and instead stays his mind upon the Omnipotent Good and its supreme laws.

Through the activity of the “elect”—the thinkers of good—whom the Lord has chosen, the day of adjustment will be shortened for all flesh. Now is the time for the righteous to “shine forth as the sun”—calm, poised, undisturbed and unmoved in the face of turmoil and strife. This is not an unsympathetic attitude toward suffering humanity, but is an expression of that great compassion taught and demonstrated by Jesus Christ.

No one ever rendered assistance to another through becoming involved in the inharmony. The master discerns error, but for the purpose of correcting it. This is the righteous judgment referred to by Jesus, when he said: “My judgment is righteous; because I seek not mine own will, but the will of him that sent me.” The will of “him that sent me” is that perfection become manifest. “Thy will be done in earth, as it is in heaven.” Let the fruits of Divine ideas be established in the earth I Divine ideas do not bear fruit only as man lays hold of them through thought and makes them creative agencies in consciousness.

The “weeping and the gnashing of teeth” common to the “last days” is but the travail of souls in their passing from darkness unto light. Let the love of your heart go out to humanity, but let it be a constructive messenger of faith in the power of the Omnipotent Good to dissipate the darkness of the ignorant thoughts of the race. Bless the souls struggling toward the light through being faithful in speaking the Word that will uplift, cheer and purify. Constructive thought is to the despairing ones what warm rays of sunshine is to the plant, full of the urge to grow, hidden under the earth.

All genuine power is invisible. Underneath the surface of things is exhaustless intelligent energy awaiting the touch of a master mind to convert it into a stream of life for the healing of all nations. We touch the underlying good forces of the universe with the earnest Word of Truth, and bring into visibility the hidden melodies of God’s kingdom.

What was established in the race by Jesus in his day can be intensified by the activities of the Body of Christ in this day. Everyone has a work to do in establishing the new race consciousness, and that work will be an outer expression of the state of consciousness of the individual. We gravitate only toward that to which we are inwardly attached. That which we seek is seeking us; we cannot miss our own.

No matter what seems to be the relative aim of men in this day of adjustment, in and through all activity one supreme purpose is unfolding itself. The goal of this purpose is the establishment in the earth of principles conducive to the highest development of man. The quickening Spirit is now moving upon the face of the earth resurrecting all men into an appreciation of Life and its harmonious activities. With this appreciation will come a desire to know the Principle of Harmony; and with knowledge man will love the activities of Spirit with the same intensity as he has heretofore loved the things of sense. The kingdom of heaven is being established, and every soul is under obligations to be about his Father’s business—the business of bringing perfection into manifestation.

Volumes we have not yet scanned

Thanks to Rev. Coco Ramos, we have received in nearly all Unity magazines from 1910 through 2000. We are in process of scanning them and they will be available here soon. There are a few missing volumes. If you have them, or if you have a source for them, please let us know. Here are the volumes we need: