In the previous chapter on demographics, we saw that Unity appeals to a subculture of Americans who are disproportionately female, divorced, educated and in control occupations. This chapter further defines that subculture by a kind of religious personality, which is identified by the characteristics of religious seekers. High degrees of individualism, mysticism and acceptance of pluralism are associated with religious seekers (Roof, 1993) and with Unity as well. A significant distinguishing characteristic of seekers, according to Bellah et al. (1985) and Roof, is a self-description as being spiritual rather than religious. While 52 percent of all Unity respondents said they consider themselves religious, 96 percent described themselves as spiritual. Roof explains the distinction between the two: "To be religious conveys an institutional connotation: to attend worship services, to say Mass, to light Hanukkah candles. To be spiritual, in contrast, is more personal and empowering and has to do with the deepest motivations in life." (77) Barbara said that although she had attended churches for years and had been "saved," she never felt spiritual until she started attending Unity, which she doesn't consider a religion.

Religion is, to me, very straight-laced and rigid. There was no way to be human. If you did everything that was required of you to do, to me, I would never have any fun. It was just too hard. I could never do that. And I didn't really believe that I needed to be saved. I didn't think I had been lost, at least not in that sense of the word.

The mystical idea of God within, which is a central tenet of Unity's belief system, is more prevalent among Unity participants than any other group. In addition, a much higher percentage of Unity participants report that they practice meditation, compared with both the highly active seekers and all others. This is not surprising since Unity emphasizes meditation as a tool for experiencing the God within. Unity participants are also more likely to believe in reincarnation, which Unity does present as a theory worthy of consideration.

A slightly lower percentage of Unity participants believe in psychic powers and ghosts, which Roof included in his study as a measure of New Age beliefs. He writes of the responses he received from his group of highly active seekers: "These mystics draw from a variety of religious traditions and are disproportionately inclined to believe in ghosts, in reincarnation, and in psychic powers. All of these phenomena appeal to experience and intuition — the bedrock upon which mystical New Age religion rests" (p. 84).

This and other data suggest that New Age religion and Unity are marketplace competitors for the same subgroup of religious seekers. While this competition for the same group of seekers sometimes causes the two movements to be confused with each other, Unity does not consider itself to be New Age, and it is likely that many New Age adherents would consider Unity to be too limiting. Annemarie explained how Unity outsiders could confuse the church with the New Age movement.

I remember over the past years there have been people out here who are into numerology and astrology and all these things, and I don't look down at them, the things they search into, but I realize these are just tools. Some people get carried away and they realize the power in those tools and they go after the power of it and get off the path. So the other person who sees that and sees it only from the outside says, "Ah, that's what Unity's about." Like the story with the elephant. For outsiders they only see that part of Unity. Just like outsiders from the Catholic church or any other church only see that part that bothers them, so they don't go back.

When presented with the statement "I consider myself to have a 'New Age' philosophy," 39 percent of Albuquerque respondents and 67 percent of retreat respondents agreed. This reluctance, especially in Albuquerque, to identify with the New Age movement shows that participants distinguish between the two philosophies. The divergence between the Albuquerque and retreat groups also points to a wide disparity of acceptance regarding New Age which may be difficult for the Unity movement to balance. In contrast to this overt question about New Age, 80 percent of Albuquerque respondents and 97 percent of retreat respondents agreed to the statement, "I create my own reality." Although this is a central belief of Unity philosophy, it is also a popular philosophy in New Age. Unity respondents were also asked about belief in astrology and angels. While 71 percent said they believed in angels, only 29 percent professed belief in astrology, which is considered to be in the New Age family. 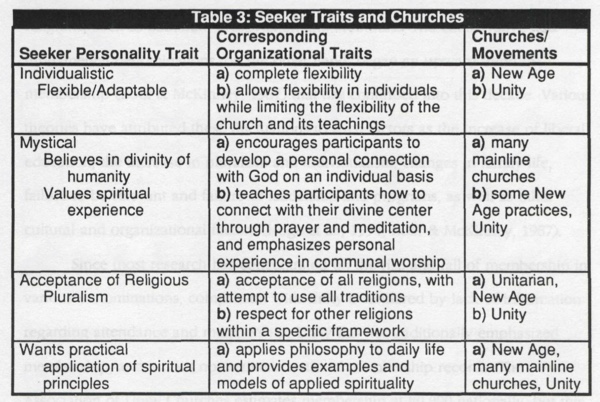 In summary, Unity is a truly American religion which was developed to meet the needs of a distinct group of religious seekers who value individualism, pluralism, the mystical experience and practical application of religious principles. Although other religious movements, such as New Age, also market their spiritual wares to this subgroup of religious seekers, Unity's niche in the marketplace is continuing to grow because its philosophy and practices are meeting the needs of increasing numbers of these seekers.