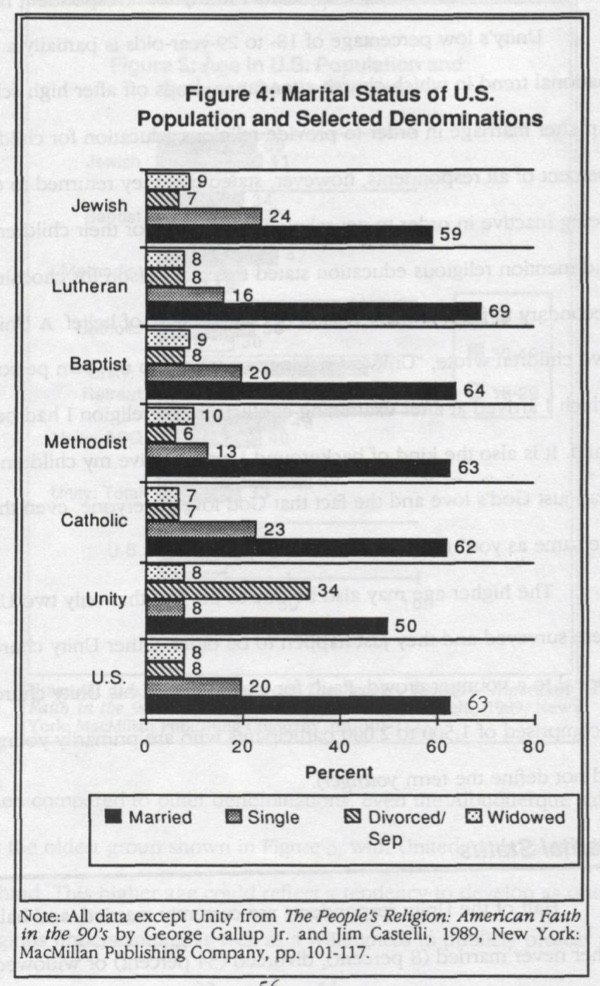 the higher average age rather than the possibility that single people who have never been married are less cornfortable at Unity than the single people who are divorced. In addition, the percentage of divorced respondents was significandy higher at the retreat (49 percent), compared with Albuquerque (26 percent). The retreat respondents also included fewer who were widowed (3 percent) compared with Albuquerque (11 percent).

The most significant finding regarding marital status is that Unity attracts a much higher number of divorced people than other denominations. While other churches seem to follow the general pattern of marital status in the U.S. population, the Unity respondents in this survey included fewer married and a much higher percentage of divorced people.

Of the ten people interviewed for this research, four are divorced. Both Barbara and Jeanne were introduced to Unity shortly after their divorces and have many similarities in their stories. Barbara was reluctant to return to her former church not only because her husband was also a member there but because she said the church didn't really seem to care when they stopped attending due to marital difficulties. After her divorce, she learned of Unity when a patient of hers gave her some literature and she was looking for a spiritual boost. "After being married for 29 years, it's kind of hard to be out on your own and live alone," Barbara said. "I finally looked in the phone book and found out where the Unity church was and went there. The very first time I went there I felt love and acceptance. Of course, nobody knew my story, but it was just nice."

Jeanne had a similar experience after her marriage of 20 years ended. She recounted how the Unity philosophy helped her cope with the low self-esteem that the divorce had left her with.

In 1971 I was divorced. I went back to the Catholic church, and I tried to get counseling. I really wasn't received and I didn't get any help. At that time a friend sent me a couple of Unity magazines. When I opened them up, the first thing I saw was "Whatever pattern I set up in my mind, order ensures that the effect will follow perfectly." At that point in my life I was thinking very negatively, and it was really coming into being. I felt that my life was over, that I couldn't work, that I was too old, my life was over. I started using affirmations and sent for literature from Unity Village. I didn't realize they had churches. And immediately my life got better. The positive affirmations really worked. I started working and no longer felt I was old. I actually felt I was young again. My life was just beginning, it seemed, at that point.

Once Jeanne discovered that Unity had churches as well as literature, she found a church near her home and started attending.

It was just really an incredible experience. I found other single people like myself. I found a lot of camaraderie and social activity. I also felt like I'd come home. It was a very homey atmosphere — the physical hugging. At that time it was a small church and that really helped me to grow and to make changes in my life.

The acceptance of people from all walks of life was frequendy mentioned by respondents as one of the strengths of Unity. Liberal churches like Unity are far more likely to accept family situations which differ from the traditional two-parent families, while more conservative churches tend to emphasize the two-parent family as normal or "God-given" (Roof & McKinney, 1987, p. 156). Unity appears to have an accepting attitude toward alternative patterns, such as same-sex unions. For example, 89 percent of all respondents said a homosexual should be allowed to be ordained as a minister. It would follow, then, that gay and lesbian relationships would be accepted by those in the congregation.

The intellectual acceptance of alternative family combinations, however, is sometimes met with subconscious resistance. Annemarie said that while she values the openness she finds at Unity, she said sometimes she must struggle with the differences between her philosophical beliefs and her past experience.

Harmony in a world of difference is our (Unity's) latest slogan now. There I sometimes feel an inner struggle. For instance last Sunday there is a young girl I have known for many years, a beautiful young girl, and I've seen her with another young girl a lot. So I just assumed they're friends. I got a beautiful wedding invitation, and she is about to marry the other girl. Of course with my old fashioned upbringing there is this struggle of "This isn't right," and yet there is this part of me that says "Don't look down on something you don't understand."

So while acceptance is the ideal and the goal at Unity, the ability of a congregation to carry out that ideal is dependent on each participant's ability to work through similar issues. The difficulties of practicing acceptance of all people will be discussed further in Chapter IV.