Roof and McKinney (1987) report that the more liberal mainline denominations are aging more rapidly than conservative denominations. Unity follows this trend with 60 percent of all respondents over age 50. A look at the breakdown between Albuquerque and the retreat, however, shows a significant difference, with the retreat participants being predominately older. Because retired people have more time available to attend retreats, this group is probably not representative of Unity in the age category. The Albuquerque congregation, on the other hand, presents a more representative sample. 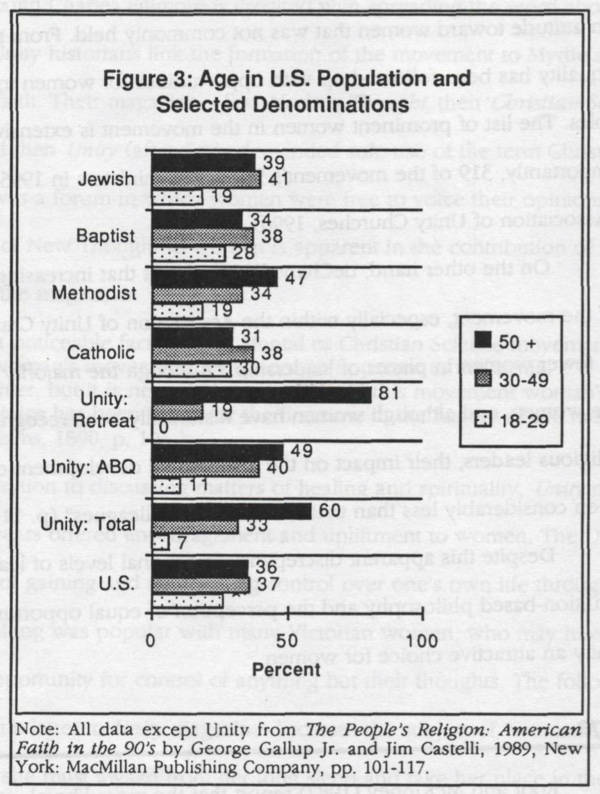 When compared to other denominations, even the Albuquerque subgroup of Unity is the oldest group shown in Figure 3, with United Methodists following closely behind. This higher age could reflect a tendency to develop as one ages a firmer religious understanding as well as a willingness to publicly profess non-traditional beliefs. One Unity member stated, "I found that the older I get the more solidified my beliefs in God and how we interact have become. Although I have always believed the way I do, I found that Unity most closely matches those beliefs. I wish I had found Unity earlier in my life" (respondent no. 31).

Unity's low percentage of 18- to 29-year-olds is partially a reflection of the national trend in which church attendance drops off after high school and picks up after marriage in order to provide religious education for children. Only 8 percent of all respondents, however, stated that they returned to church after being inactive in order to get religious education for their children. The few who did mention religious education stated that that reason for choosing Unity was secondary to their primary reason of compatibility of belief. A Unity member with two children wrote, "Unity's teachings are closer to my own personal beliefs, which I arrived at after examining conflicts in the religion I had been taught as a child. It is also the kind of background I want to give my children — no guilt and fear, just God's love and the fact that God loves everyone, even those who are not the same as you" (respondent no. 21).

The higher age may also be due to the fact that only two Unity subgroups were surveyed and they just happen to be older. Other Unity churches seem to appeal to a younger crowd. Paul, for example, said his Unity church in a large city is comprised of 1,500 to 2,000 participants who are primarily younger (although he did not define the term younger).