Much sociological research in the last few decades has focused on interesting fluctuations in American church membership and attendance from the 1950s to the present. Most churches experienced a post-war period of growth in the 1950s, with 49 percent of Americans reporting in a Gallup poll that they attended church regularly. The overall attendance rate dropped in the 1970s to about 40 percent, but the decline was felt much more in the mainline Protestant religions, such as Lutheran, Presbyterian and Methodist. The conservative and fundamental denominations, on the other hand, began an upward trend in membership (Roof & McKirmey, 1987) that has continued into this decade. Various theories have attributed these fluctuations to such factors as the increase of liberal education, the increase in pluralism and individualism, changes in family life, failure to be relevant and failure of leadership and programs, as well as other cultural and organizational factors (Hoge et al., 1994; Roof & McKirmey, 1987).

Since most research has concentrated on the rise and fall of membership in various denominations, comparison with Unity is hindered by lack of information regarding attendance and membership. Unity has not traditionally emphasized membership, and it does not maintain national membership records. The Association of Unity Churches estimates membership at 80,000 nationally, but this figure does not include the significant number who attend regularly but are not members. Although actual membership numbers are not available, the number of Unity churches is clearly on the rise. This analysis will assume that the number of churches is increasing due to an organization-wide increase in membership and attendance. While the number of churches gives some idea of the growth of the movement, there is wide variation regarding the number of people involved in each ministry. Although the correlation is tenuous, it is sufficient to give a broad overview of the direction of Unity's growth in comparison with other denominations (see Figures 11 and 12). 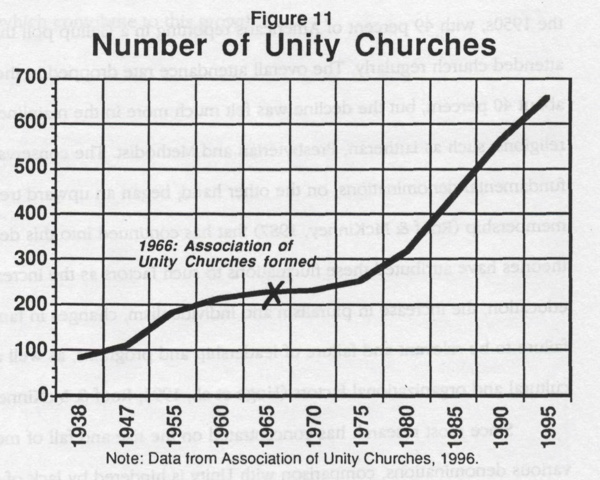 The general trend of growth in the number of Unity churches can be compared with the general trends in membership of selected denominations in a graph prepared by Roof and McKinney (1987), and replicated in Figure 12. This graph shows that conservative Protestant denominations, such as the Church of God and the Southern Baptist Convention, have increased membership substantially since 1950. Moderate denominations (Methodists and Disciples of Christ) and liberal denominations (Presbyterian and Episcopal) have lost membership in the same time period. 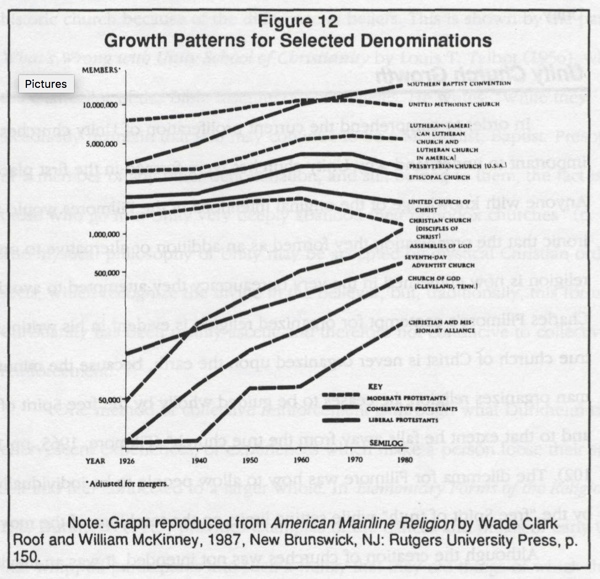 After first analyzing the history behind the growth of Unity, this chapter investigates several popular theories of church growth and how they apply to Unity.