The occupation of Unity respondents is closely linked to the high education level. More than 50 percent hold professional, managerial or supervisory roles. Unfortunately, a flaw in the survey caused just over 24 percent list their occupation as "other." Many in the "other" category, however, noted that they are retired but did not list their former occupation. 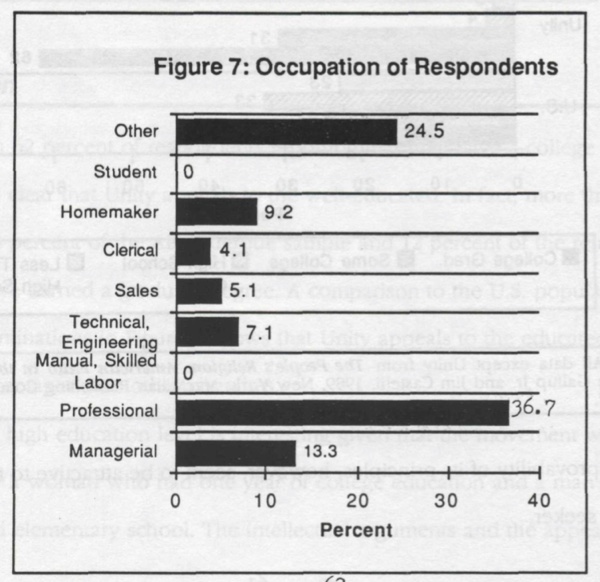 The high educational and occupational level of Unity respondents suggests that there might be an elective affinity between these demographic groups and the philosophy of Unity. The notion of elective affinity proposes that groups of people gravitate toward religious philosophies which substantiate their place in life. Weber (1930) used the term elective affinity in The Protestant Ethic and the Spirit of Capitalism to describe how early capitalists used Calvinist notion of predestination to justify their success. Because exceptional performance in a worldly calling was seen by Calvinists as proof of being among the elect, the Puritan religious philosophy justified capitalistic ideology. Similarly, people with a high education level who hold professional and managerial roles could have certain elective affinities with a religion which emphasizes prosperity, success, abundance and control over one's destiny. While a discussion of this connection would be too lengthy in this forum, the theory of elective affinity and Unity could prove to be an interesting avenue of future research.