Reported church attendance is once a week or more for 52 percent and two to three times a month for 37 percent of all respondents. While 89 percent of the Albuquerque respondents and 88 percent of the retreat respondents reported that they attend at least two to three times a month, the number reporting more frequent attendance differed significantly. About 69 percent of the retreat participants reported that they attend once a week or more, while 42 percent reported the same in Albuquerque. Because the surveys for this research were distributed at a church service and at a retreat, these attendance numbers would be expected to be high in comparison to surveys of the general population. In other words, people who are unlikely to attend church were statistically less likely to be included in this survey.

The church history of those surveyed provides interesting insights into the background of Unity members and participants. Only 15 percent of current Unity members named Unity as the first church they joined. Furthermore, the fact that these 15 percent named Unity as their first church doesn't mean they grew up in it, because they may have joined their first church after they entered adulthood. Therefore, Unity is gaining most of its members from outside the church rather than through family tradition. This is necessary for a growing church, since current families can't produce enough children for significant growth. The question arises, however, about whether Unity will be able to retain the participation of children of current members. Unity does have an extensive youth program, with Sunday school as well as youth groups for all ages. The ability of Unity to maintain appeal to the children of current participation is important to the future of the movement and should be included in future research of Unity.

Another implication of this high rate of people switching into Unity is that their commitment to the church might be higher since the church was self-selected rather than handed down to them. Roof and McKinney (1987) report that switchers, or converts to other religions, are more committed and serious about their faith. The commitment is a result of the decision to join a church based more on actual religious beliefs than on family tradition. Although higher commitment is evident among switchers in other denominations, this possibility must be balanced by the fact that Unity is not a high-demand church in terms of membership, attendance or financial giving5.

In this sample population, Unity draws most heavily from the Methodist and Roman Catholic churches, as shown in Table 1. 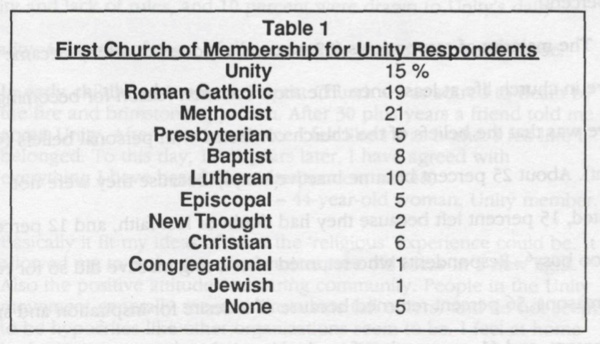 In a study of denominational switching in the United States, the Princeton Religion Research Center (1993) reported that the top three churches or denominations in the United States are Roman Catholic, 28 percent; Southern and other Baptist, 19 percent; and Methodist, 11 percent. Of all people who had ever switched denominations, the most switchers came from the Roman Catholic faith with 18 percent of all switchers, followed by Methodists with 15 percent and Baptists with 11 percent, (p. 38) It is not surprising, therefore, that Unity draws strongly from these groups.

About 67 percent of Unity respondents have switched membership to a denomination other than the first church they joined. The main denomination that people switched to was Unity (72 percent), followed by other metaphysical groups (13 percent), Presbyterian (6 percent), Methodist (5 percent) and Episcopal (5 percent). Roman Catholic, Lutheran, Christian, Latter Day Saints and Unitarian were all 3 percent.

The majority of respondents (82 percent) reported that they became inactive in church life at least once. The most common reason for becoming inactive was that the beliefs of the church conflicted with personal beliefs (44 percent). About 25 percent became inactive simply because they were not interested, 15 percent left because they had doubt or lost faith, and 12 percent were too busy6. Respondents who returned after being inactive did so for two major reasons: 56 percent returned because of a desire for inspiration and spiritual nourishment, and 41 percent they found a church which better fit their needs and beliefs. In addition, 12 percent returned because of a need for a feeling of community, 11 percent returned with a spouse or family, 8 percent returned for religious education for their children, and 6 percent had a conversion experience. The reasons for inactivity and returning from inactivity suggest that many respondents didn't doubt or lose faith as much as they believed something which didn't sit well with their original church's teachings. One 37-year-old woman who is a Unity member and former Lutheran wrote, "Unity teachings go along with everything I believe! I do not have to hide who I am or what I think (as in other churches)!" (respondent no. 63)

When asked why they remained members of Unity, switched to Unity or participated in Unity, two-thirds of all respondents wrote that they were attracted to Unity because its beliefs were compatible with their own. The second-most frequent answer, from 22 percent of respondents, was that Unity provided a feeling of belonging or community. About 14 percent said they liked Unity's flexibility and lack of rules, and 10 percent were drawn to Unity's daily practicality. A sample of some of the comments from the survey include:

In early childhood I went to Baptist Church — was scared to death by the fire and brimstone approach. After 30 plus years a friend told me about Unity. After just one service I felt like I was home. I felt like I belonged. To this day, 1-1/2 years later, I have agreed with everything I have heard there, (respondent no. 48)
- 44-year-old woman, Unity member.

Basically it fit my ideas of what the 'religious' experience could be. It allowed me to make my own choices, see old ideas in a new light. Also the positive attitude and caring community. People in the Unity movement generally seem to like others (all others) and do not seem to be hypocrites like other organizations seem to be. I feel at home in the Unity movement, (respondent no. 55)
- 44-year old man, Unity member, former Catholic.

I feel a greater sense of spirituality attending the Unity Church. My beliefs and ways of worshipping God are more closely aligned with the Unity Church. I have not joined because of my own inner struggle with the idea of giving up Catholicism, and my husband is also Catholic and unwilling to explore other ways of worship despite the lack of meaning gained from attending Catholic services, (respondent no. 39)
- 50-year-old Catholic woman.

My thoughts and feelings and meditation I had been always doing to survive in this world fit right in with the teachings of Unity. (respondent no. 62)
- 72-year-old Unity member, former Methodist