With 62 percent of respondents reporting that they have a college degree or higher, it is clear that Unity appeals to the well-educated. In fact, more than 26 percent (33 percent of the Albuquerque sample and 12 percent of the retreat sample) have earned a graduate degree. A comparison to the U.S. population and other denominations in Figure 6 shows that Unity appeals to the educated in much higher percentages than other churches. 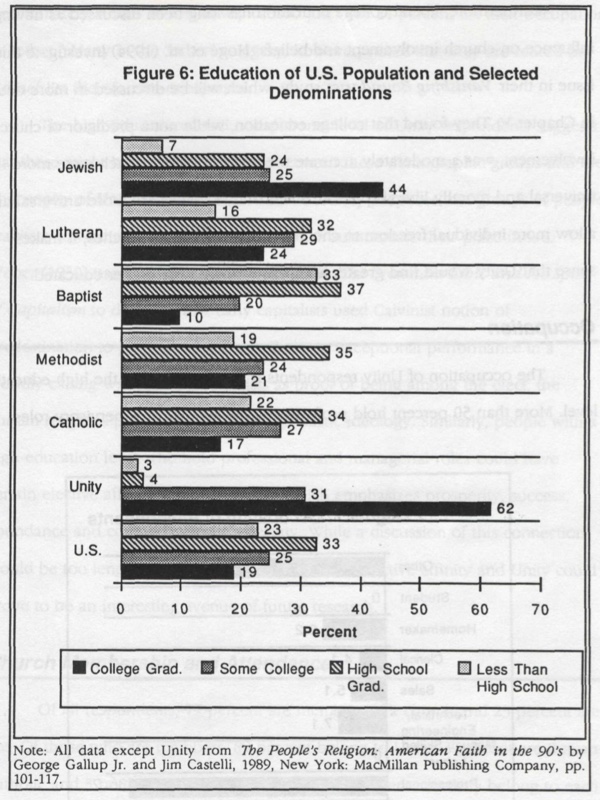 This high education level is interesting given that the movement was founded by a woman who had one year of college education and a man who had not finished elementary school. The intellectual arguments and the appeal to the scientific provability of its principles, however, seem to be attractive to the educated seeker.

Furthermore, liberal college education has long been discussed as having influence on church involvement and beliefs. Hoge et. al. (1994) investigate this issue in their Vanishing Boundaries study, which will be discussed in more detail in Chapter V. They found that college education, while not a predictor of church involvement, was a moderately accurate predictor of beliefs which were more universal and morally liberal (p. 169). Since Unity's beliefs are more universal and allow more individual freedom to choose than many other churches, it makes sense that Unity would find greater acceptance among the higher educated.