Belief As an Indicator of Participation

In the last section, we saw that as Unity grew it became increasingly necessary for its leaders to limit what could be taught under the auspices of the movement. Over the years, Unity's beliefs have been refined, as well as adapted to accommodate changes (see examples in Chapter II). The beliefs of Unity are a strong draw for the church, with 66 percent of survey respondents reporting that beliefs were one of the major reasons they chose the church. This section will investigate the impact that Unity's beliefs have on its growth as a religious movement.

Roof and McKinney (1987) present evidence that the liberal Protestant churches have not been losing as many members to the growing conservative churches as to the ranks of the unchurched or to the growing segment of "other" religions. They argue that there are two extremes which pull members from the ranks of moderate Protestantism. One extreme is fundamentalism, characterized by its exclusivism and anti-ecumenical attitudes. The other extreme attracts the young and well-educated to mystical faiths, meditation, self-enlightenment and other individual forms of religion. Roof and McKinney contend that this led to greater moral and cultural pluralism, as well as privatization of religion and increased individualism. With less emphasis on conformity and tradition, actual religious beliefs have become more important in the decision of which church, if any, to attend. They write that

With the breakdown of ascriptive loyalties and the reduced role of the family in religious socialization, individually based differences in beliefs and values now operate more freely in religion. Moral and life-style choices have come to play a more important role in religious affairs as norms of individual responsibility have become clearer. Under less pressure to adhere to old group loyalties, persons are free to make decisions on the basis of genuine religious preference, (p. 69)

This finding was reiterated in the 1994 study, Vanishing Boundaries: The Religion of Mainline Protestant Baby Boomers, by Dean Hoge et al. The researchers found that the strongest predictor of church involvement was religious belief. They further found that those who adhered what Hoge et al. describe as fundamental Christian beliefs were more likely to attend church. Those "core beliefs" are that the Bible is the inspired word of God, that Jesus Christ was the son of God and an expectation of life after death (p. 78). They found that 100 percent of self-described fundamentalists answered as "believers" on both of these questions, compared to 72 percent of the total sample. The same questions asked of Unity respondents, as shown in Table 4, resulted in a 43 percent "believer" rate, according to this scale. This percentage is lower than all eight groups evaluated in the Vanishing Boundaries study, except the non-religious group which measured 6 percent believers (p. 79). The sticking point for Unity respondents was belief about who Jesus Christ was. Although Unity teaches that Jesus was the son of God, the movement also teaches that everyone is a child of God with the potential to develop the Christ within themselves. Most of the 24 percent who answered "other" on this question described Jesus in this way. 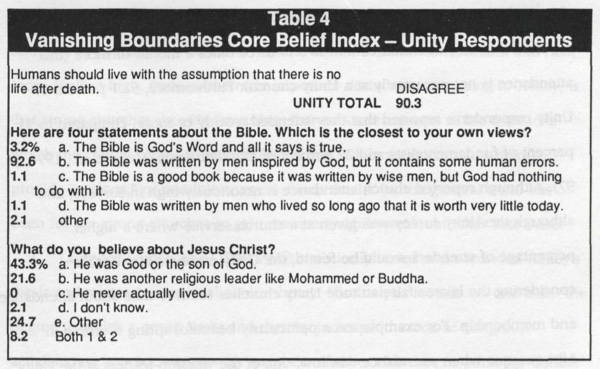 Although the Unity respondents scored low as believers on this scale, they scored high on questions designed to measure belief and practice of Unity principles, as shown in Table 5. This uniformity of belief is surprising, given that Unity is touted as a creedless religion and is noted by participants as having no dogma.

This data suggests that strong belief in the teachings of the church — whether or not they are fundamentalist teachings, as Hoge et. al. would suggest — seems to be linked to reported church attendance and membership.