Unity is a movement which has always embraced principles now associated with women's experience: the divinity of all humanity, intuition, idealism and the importance of personal experience and relationships. This emphasis on traditionally female characteristics is likely to be part of the reason women represent a significant majority of Unity participants, especially when compared to the U.S. population and other denominations in Figure 24 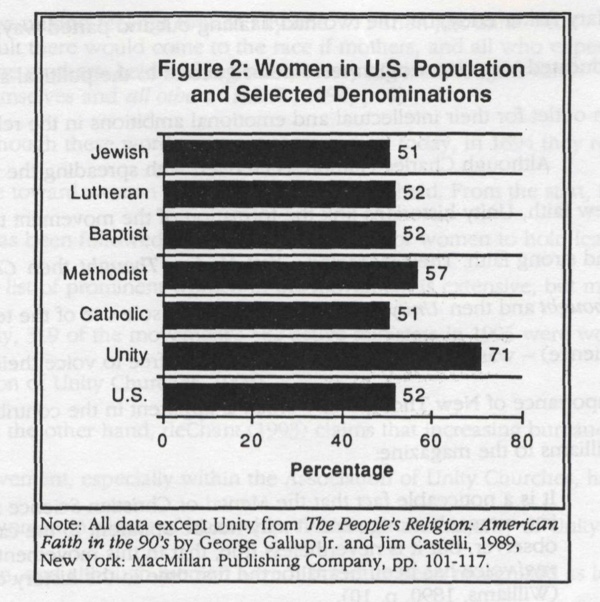 Jeanne, for example, said she was drawn to Unity both because it met her emotional needs and showed evidence of equality for women.

There isn't the male authority that you find in other churches. . . . There is really equality of the sexes here. . . . There are a lot of women ministers who are readily accepted as ministers with men. Also I think women are more open in their emotional needs, and I think (Unity) meets emotional needs, as well as intellectual, and the feeling needs: the encouragement, the hugging, the being close.

This strong appeal to women has been present since the beginning of New Thought. Two of the three main New Thought groups — Unity and Divine Science — were founded by women, and all the leaders of the major New Thought schools were taught by the same woman: Emma Curtis Hopkins, who ran the Illinois Theological Institute. Hopkins, in turn, was taught by Christian Science Founder Mary Baker Eddy, but the two had a falling-out and parted ways. Although these educated Victorian women were denied access to the political arena, they found an outlet for their intellectual and emotional ambitions in the religious world.

Although Charles Fillmore is credited with spreading the word about their new faith, Unity historians link the formation of the movement to Myrtle's healing and strong faith. Their magazine — first Modern Thought, then Christian Science Thought and then Unity (after Eddy demanded sole use of the term Christian Science) — was a forum in which women were free to voice their opinions. The importance of New Thought to women is apparent in the contribution of Helen Williams to the magazine:

It is a noticeable fact that the Mental or Christian Science movement is a woman's movement. It may not be apparent to the casual observer, but it is nevertheless true, that in this movement woman's real voice has been heard for the first time in the history of the race. (Williams, 1890, p. 10).

In addition to discussing matters of healing and spirituality, Unity magazine in its early years offered encouragement and upliftment to women. The Unity philosophy of gaining and maintaining control over one's own life through positive thinking was popular with many Victorian women, who may have had very little opportunity for control of anything but their thoughts. The following excerpt from a letter to Unity magazine discusses the subject of "woman."

Now she must awake from her long sleep and take her place in the world where God meant she should stand; right by the side of man and no longer behind him. She must no longer feel that she is inferior to him, but his equal and so help him up higher than he now stands for he can never rise any higher than he is until woman lifts him up. I think I hear some of my sisters say, can you tell us how to do it? Yes, I can. Through your thought; for thoughts are things; as sure as you are alive they are. If any of you doubt it just watch your thoughts for but one day and see what you get out of them. See what comes to you through the day if you get angry or have unkind feelings toward any one. . . . Then just think what result there would come to the race if mothers, and all who expect to be mothers, held nothing but the very highest thoughts for themselves and all others. (H.B.T., 1894, p. 9)

Although these words may not seem radical today, in 1894 they represented an attitude toward women that was not commonly held. From the start, talk about equality has been followed up with opportunities for women to hold leadership roles. The list of prominent women in the movement is extensive, but more importantly, 319 of the movement's 582 active ministers in 1995 were women (Association of Unity Churches, 1996).

On the other hand, deChant (1993) claims that increasing bureaucratization of the movement, especially within the Association of Unity Churches, has resulted in fewer women in places of leadership. "Although the majority of Unity ministers are women, and although women have historically been recognized as legitimate religious leaders, their impact on the institutional development of the AUC has been considerably less than that of their male colleagues" (p. 114).

Despite this apparent discrepancy at national levels of leadership, the intuition-based philosophy and the perception of equal opportunity seem to make Unity an attractive choice for women.