Jesus and the Woman from Samaria 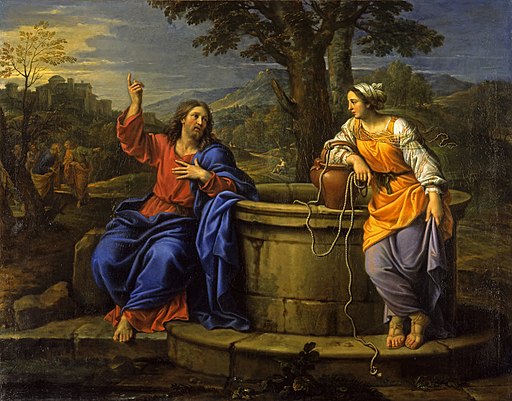 4:1When therefore the Lord knew that the Pharisees had heard that Jesus was making and baptizing more disciples than John 4:2(although Jesus himself baptized not, but his disciples), 4:3he left Judea, and departed again into Galilee. 4:4And he must needs pass through Samaria. 4:5So he cometh to a city of Samaria, called Sychar, near to the parcel of ground that Jacob gave to his son Joseph: 4:6and Jacob's well was there.1 Jesus therefore, being wearied with his journey, sat thus by the well. It was about the sixth hour.

4:7There cometh a woman of Samaria2 to draw water: Jesus saith unto her, Give me to drink. 4:8For his disciples were gone away into the city to buy food. 4:9The Samaritan woman therefore saith unto him, How is it that thou, being a Jew, askest drink of me, who am a Samaritan woman? (For Jews have no dealings with Samaritans.)3 4:10Jesus answered and said unto unto her, If thou knewest the gift of God, and who it is that saith to thee, Give me to drink; thou wouldest have asked of him, and he would have given thee living water. 4:11The woman saith unto him, Sir, thou hast nothing to draw with, and the well is deep: whence then hast thou that living water? 4:12Art thou greater than our father Jacob, who gave us the well, and drank thereof himself, and his sons, and his cattle? 4:13Jesus answered and said unto her, Every one that drinketh of this water shall thirst again: 4:14but whosoever drinketh of the water that I shall give him shall never thirst; but the water that I shall give him shall become in him a well of water springing up unto eternal life. 4:15The woman saith unto him, Sir, give me this water, that I thirst not, neither come all the way hither to draw. 4

4:16Jesus saith unto her, Go, call thy husband, and come hither. 4:17The woman answered and said unto him, I have no husband. Jesus saith unto her, Thou saidst well, I have no husband: 4:18for thou hast had five husbands;5 and he whom thou now hast is not thy husband: this hast thou said truly.4:19The woman saith unto him, Sir, I perceive that thou art a prophet. 4:20Our fathers worshipped in this mountain; and ye say, that in Jerusalem is the place where men ought to worship. 4:21Jesus saith unto her, Woman, believe me, the hour cometh, when neither in this mountain, nor in Jerusalem, shall ye worship the Father. 4:22Ye worship that which ye know not: we worship that which we know; for salvation is from the Jews. 4:23But the hour cometh, and now is, when the true worshippers shall worship the Father in spirit and truth: for such doth the Father seek to be his worshippers. 4:24God is a Spirit: and they that worship him must worship in spirit and truth. 4:25The woman saith unto him, I know that Messiah cometh (he that is called Christ): when he is come, he will declare unto us all things. 4:26Jesus saith unto her, I that speak unto thee am he.

4:27And upon this came his disciples; and they marvelled that he was speaking with a woman; yet no man said, What seekest thou? or, Why speakest thou with her? 4:28So the woman left her waterpot, and went away into the city, and saith to the people, 4:29Come, see a man, who told me all things that ever I did: can this be the Christ? 4:30They went out of the city, and were coming to him.

4:31In the mean while the disciples prayed him, saying, Rabbi, eat. 4:32But he said unto them, I have meat to eat that ye know not.6 4:33The disciples therefore said one to another, Hath any man brought him aught to eat? 4:34Jesus saith unto them, My meat is to do the will of him that sent me, and to accomplish his work. 4:35Say not ye, There are yet four months, and then cometh the harvest? behold, I say unto you, Lift up your eyes, and look on the fields, that they are white already unto harvest. 4:36He that reapeth receiveth wages, and gathereth fruit unto life eternal; that he that soweth and he that reapeth may rejoice together. 4:37For herein is the saying true, One soweth, and another reapeth. 4:38I sent you to reap that whereon ye have not labored: others have labored, and ye are entered into their labor.

4:39And from that city many of the Samaritans believed on him because of the word of the woman, who testified, He told me all things that ever I did. 4:40So when the Samaritans came unto him, they besought him to abide with them: and he abode there two days. 4:41And many more believed because of his word; 4:42and they said to the woman, Now we believe, not because of thy speaking: for we have heard for ourselves, and know that this is indeed the Saviour of the world.

4:43And after the two days he went forth from thence into Galilee. 4:44For Jesus himself testified, that a prophet hath no honor in his own country. 4:45So when he came into Galilee, the Galilaeans received him, having seen all the things that he did in Jerusalem at the feast: for they also went unto the feast.

4:46He came therefore again unto Cana of Galilee, where he made the water wine. And there was a certain nobleman, whose son was sick at Capernaum. 4:47When he heard that Jesus was come out of Judaea into Galilee, he went unto him, and besought him that he would come down, and heal his son; for he was at the point of death. 4:48Jesus therefore said unto him, Except ye see signs and wonders, ye will in no wise believe. 4:49The nobleman saith unto him, Sir, come down ere my child die. 4:50Jesus saith unto him, Go thy way; thy son liveth. The man believed the word that Jesus spake unto him, and he went his way. 14:51And as he was now going down, his servants met him, saying, that his son lived. 4:52So he inquired of them the hour when he began to amend. They said therefore unto him, Yesterday at the seventh hour the fever left him. 4:53So the father knew that it was at that hour in which Jesus said unto him, Thy son liveth: and himself believed, and his whole house. 4:54This is again the second sign that Jesus did, having come out of Judaea into Galilee.2