Introduction to Methods and Ideals for Conducting Centers and Study Groups

There is little doubt that the following words in Methods and Ideals for Conducting Centers and Study Classes, was penned by Charles Fillmore:

“the ministry of the center is not to build a new organization but to establish a center of vital spiritual service to a community. The work of the center or class is but supplementary to that of the churches; it will no doubt be only a short time until the churches recognize this fact, and admit the center or study class to the church.”

We now know that did not happen. We never got accepted into traditional Christianity.

So now what? Should we walk away from the mainstream churches? Or should we claim for ourselves and embrace our rightful place in the Christian tradition? Is it possible that what could not be achieved ninety years ago is now achievable? Can we finally get recognition among mainstream Christians that metaphysical Christianity is a valid expression of the faith of Jesus?

Here are ten reasons why it is now possible*:

I believe that now is the time for metaphysical Christianity to attract large numbers of the unchurched, but spritual and religious. Such was the vision held by Charles Fillmore in 1924 when Unity published Methods and Ideals for Conducting Centers and Study Groups. Times have changed; the Unity movement is now a denomination, centers are now churches, and church leaders are now licensed and ordained. But the “methods and ideals” are still as valid as they were when Unity was in its heyday.

It is in that spirit that I have republished Methods and Ideals at: www.truthunity.net/methods-and-ideals

Here you will find the text of the document, PDF files of the original lessons, and, most important, a formatted and print-ready PDF for dissemination to church leadership and boards or, if you wish, an attractive, printed and bound copy. May we look to the same methods and ideals today that led Unity in its rapid era of growth in the 1920's.

How the document came to be written

Local centers began to be established in the early 1900's when Unity began to send out “field lecturers” to give talks and to establish study groups. From the start, each group was regarded as independent, due to Charles and Myrtle's trust in Spirit as the best guide and their belief in the wisdom of the individual. This strategy worked, and within twenty years hundreds of centers and study groups had been established throughout the country.

However, with independence came variation in what was taught. According to Neal Vahle, by the mid 1910's Charles Fillmore felt exasperated because of the "diluted teachings" of many Unity centers which used the Unity name to attract Unity students but then taught a mixed bag of metaphysical teachings. (The Unity Movement, pp 321-329). Vahle says the Fillmores expected centers which used the Unity name to confine their teachings to those of Unity. He highlights a 1916 commentary by Charles, who wrote,

"Coming to us from various quarters are letters telling of Unity centers that are not teaching the Unity doctrine. These letters ask how we can endorse these centers which take our name when they depart so radically from what is set forth in our literature. We do not endorse them."

Although Charles was exasperated with "center leaders whose teachings were at odds with those of Unity," by 1924 Charles had concluded that the best Unity headquarters could do would be to publish a document to guide "those who feel the urge of Spirit to take up this work." Charles Fillmore had concluded, said Vahle, that the centers "needed to be free to follow their own inner guidance."

After taking some time to assemble and develop the ideas, the document was published and announced in Weekly Unity on July 11, 1925. It was also incorporated into the Correspondence School course, thereby nudging field leaders to learn not only Unity metaphysical teachings, but to also learn and agree to Unity's principles regarding mission, leadership and professional ethics. 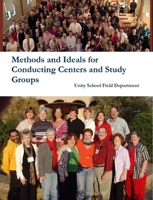 Preview and buy a printed copy of Methods and Ideals online

Download a formatted, print-ready PDF file for your own printing

Here is my summary of this six-part document

The mission of a Unity center or study class is a fuller expression of Christian principles by helping others obtain a clearer realization of the working power of God within them.

There are three states of consciousness of those who come:
The success of a center or study group depends on getting those who attend to the third state of consciousness. Therefore:
Part One - Introduction: The primal object of a center's ministry is the development of coworkers, rather than the teaching of many ideas about truth. Those who have established a "conscious relationship with the power and the presence of God within themselves" will "automatically become teachers and healers" and function as the "strong point in the organization."
Part Two - Teaching: Self-expression is gained by the assimilation of Truth rather than the assimilation of many ideas about many truths. The center or study class should teach "a simple truth thoroughly applied" instead of teaching "maze of ideas" that only "scatters one's ideas and forces."
Part Three - Healing: A very high form of the third state of consciousness (self-expression) is healing -- and healing must be a practical part of all persons who participate in the center's ministry. Unity stresses Spiritual Healing, which is healing through the Word as taught by Jesus, as opposed to mental healing, which rests on the power of the practitioner and the laying on of hands.
Part Four - Co-operation and Ethics: Having "strong spiritual realizations" is not sufficient for leading a center or study group. In order for a center or study group to be successful, those with strong spiritual realizations must obtain co-operation with others in every phase of a spiritual ministry. They do this by holding to high ethical ideals and being "true to the name Unity."
Part Five - Finances: The center or study group should see finances as an opportunity to teach Truth principle rather than as a means of carrying on the ministry. For the student, this means learning about the real Source of supply and the importance of justly compensating teachers and healers. For the leader, this means understanding that "supply comes very largely in accordance with the fullness of service that he gives to the students that come to the class or center."
Part Six - Miscelleneous Suggestions: One or two members of a center or study class who have a conscious realization of the power and presence of Spirit working in their lives is more important than large numbers, social functions or organizational structure. "Each center and study class is an independent unit of service" who's "primal purpose is to give forth the message of God to man, in order that man may be lifted above the sense of limitation and into the consciousness which was his in the beginning."