Herbert J. Hunt: A Study of the New Testament 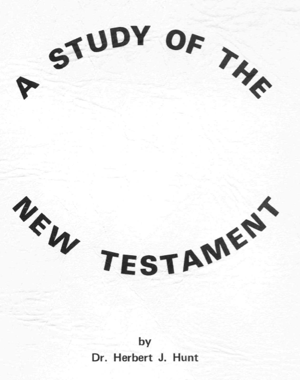 Who was Herbert J. Hunt?

Herbert J. Hunt was one of the four great Bible scholars produced by Unity, according to a well-respected teacher I know. You'll know why when you begin to read A Study of the New Testament, the historical-metaphysical course he developed for Unity's Correspondence School. Even though the course is now over fifty years old, I believe that it remains Unity's best resource for students of metaphysical Bible interpretation, for the following reasons:

Scholarship. The study is in the tradition of "historical-metaphorical" scholarship, a term used by Marcus Borg in Reading The Bible Again for the First Time. Dr. Hunt's inroduction to the New Testament is grounded in the best of liberal, historical scholarship that was available to him when he wrote. In those cases where new scholarship has emerged, I have added "Scholarly Update" notes in sidebar boxes with page references to Michael White's best-selling book From Jesus To Christianity. For the most part, the scholarship in this study remains good. I invite anyone who discovers more things which need a "scholarly update" to leave a comment on that page or to email me. I will add updates as we discover the need for them. Just note for now that Dr. Hunt was an excellent scholar.

Metaphysics. Dr Hunt was also an excellent metaphysician. A "historical-metaphorical" interpretation as described by Borg requires discipline. Without historical grounding, the imagination can "roam too freely, producing uncontrolled, fanciful interpretations that have little or nothing to do with the actual text" (Borg 43). If we want Unity to be taken seriously by the academic community, we need to follow the footsteps of Marcus Bach, Herbert Hunt and Marcus Borg, not pop philosophers.

Pedagogy. Most important, Dr. Hunt was an inspired teacher. Read the testimonial on his profile page. Dr. Hunt made the Bible come alive and he developed a system for his students to experience the same. I have added "Read the Passage" buttons where Dr. Hunt instructs us to stop and read. This study is more than an old book in a dusty library. Now that it is on the Internet, in a easily accessible format, Dr. Hunt's scholarship and spirt continues to bless and inspire a new generation of metaphysical Bible students.

My we all be blessed by this timeless study by Dr. Herbert J. Hunt.