METAPHYSICAL BIBLE INTERPRETATION OF THE OLD TESTAMENT
This is a series of lectures given by Mr. Edward Rabel, member of the faculty of S.M.R.S.
Fall semester 1975 - 2nd. Yr. Class. Lecture given on October 14, 1975

The balance of Mind and Body

Topic 37: Esau becomes the symbol for what we call body consciousness or physical consciousness while Jacob stands for at first consciousness of mentality ... mind and body cause are so closely related and interdependent that it is at a certain stage of an individual's development that it is very difficult to tell where the working of one leaves off and that of the other begins

Topic 38: There is an imbalance in power, in authority, in control; all strictly on the side of the intellect, the mentality. Isaac's fondness for Esau and Rebekah's favoring of Jacob ... always has said to me that the female favors the mind and the mind favors the body.

So we come now into the birth of Jacob and Esau which begins in Chapter 25:24-26.

See, the heel is sometimes used as the body symbol of vulnerability or the place at which control can be exercised. You know in mythology you have Achilles heel. He could be killed only if his heel could be penetrated. Mythology again is rooted in a vein of Truth, and so the physical body even at birth, according to this scripture, is at a certain level to a certain degree subject to the working of that entities mind.

Now we don't know how much mental capacity let's say a new born baby has. It would be negligible really but nevertheless the connection is there between mind and body, and even prenatally that situation exists and it comes into the actual emergence of an individual into physical birth. His intellectual awareness, while born second, has the greater control and again this sequence in which they are brought forth is correct.

You look at an infant and see the pattern of its self awareness. How it expresses its self awareness and in most cases I think we would agree that the little thing is first aware of itself as a body of appetites as its own physical reactions to things. That's what it exhibits first - its body consciousness and then there is evidence that the little thing discovers that it cannot only feel body sensations but that it can think.

Now I don't know how that comes. I don't think the baby says, Hey, I can think, but it becomes more of something going on inside of itself, which is the beginning of mental cause. Mental consciousness is not the same as mentality. Mentality is simply your organization which thinks, but mental consciousness which thinks. It's the mentality and an awareness of the mentality - an added dimension there, because actually, strictly speaking, the rock thinks on its level, but we have no indication that the rock is aware of its mode of thinking. It can't change it. We can change our mode of thinking because we have an extra dimension, more than just thinking "awareness" the power to observe me thinking. If I decide I want to change my thinking I can do it and that is the difference between just mentality and consciousness of mentality or mental consciousness.

I've added in my notes here the symbol of Jacob's holding to Esau's heel at birth - that modern science has demonstrated that mind and body cause are so closely related and interdependent that it is at a certain stage of an individual's development that it is very difficult to tell where the working of one leaves off and that of the other begins. Science has found that that is sort of a labyrinth that they are not sure as to where the actual distinction occurs - and this is indicated by the symbolism behind Jacob and Esau. For example, the psychosomatic illnesses were once unheard of, then after its discovery it was believed that it occurred only in abnormal adults. Further discovery reveals that it occurs in both normal and abnormal adults - then it was discovered that it occurs in both children and adults. 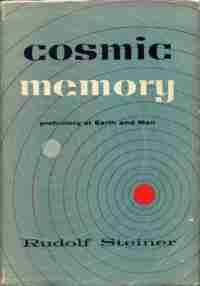 This comes from a book by Rudolph Steiner called, Cosmic Memory, and the highlight of that book is the chapter called "The Division into Sexes", and Dr. Steiner was one of these illuminated souls who occasionally could read the Akashics. There have been others, not very many, Swedenborg could, but he made a mess of it, Dr. Steiner was one, and luckily for us, he was connected with the Theosophical Movement at the time he gained this power. This power didn't last all his life, it left later, but while he had it he was connected with the Theosophical Movement, then he disagreed with the over-emphasis of the Theosophic Movement on the past, and on the ancient Eastern as being the only reliable religious history, legacy, and so he branched off into his own organization called "Anthroposophy", and gave some very wonderful teachings. He's not everybody's cup of tea and I do not recommend him as an alternative to Dr. Cady or Charles Fillmore, but, like most really illumined people, he's got a lot of very worthwhile things to say. His motivation may be somewhat different, his language, but certainly the quality of his consciousness is beyond criticism.

Now, in his chapter on the division of the sexes, he merely reports, he does not give opinions, he merely reports what he observed through this sixth sense into the race history of our planet through the Akashic recognition. I've just chosen a few excerpts from him, and please realize that these are excerpts and out of context. If this awakens any interest or curiosity in you, pursue it further. I think it will be helpful in your developing consciousness of humanity. "Thus the male and female - The soul itself is simultaneously male and female, it carries these two natures in itself. Its male element is related to what is called will, its female to what is called imagination." There we would take a slight difference, but he's correct. It's just that we say it differently. The male is thinking nature, the female the feeling nature. He simply chooses the will for man, and female, imagination. Thus it comes about that the two sexes, male and female soul inhabits a single sex, male or female body. Remember, these are excerpts, there's a lot of connecting material. "Thus, the male and female body each represent an imperfect, external embodiment of the soul, but thereby they become more perfect creatures inwardly. One can say that the male body now has a female soul. The female body, a male soul. This inner, one-sidedness of man is compensated by the fertilization through the spirit. The one-sidedness is abolished both the male soul in the female body and the female in the male body again become double-sexed through fructification by the spirit.

Thus man and woman are different only in their external form. Internally their spiritual one-sidedness is rounded out to a harmonious whole. Internally spirit and soul are fused into one unit." He has so many wonderful things to say in this same vein - "man must pass through selfishness in order to attain selflessness, again at a higher stage where, however, it will be combined with completely clear consciousness." An interesting thing about Dr. Steiner, with all of his genius, all of his expertise in so many fields, medicine, chemistry, physics, architecture, psychiatry, religion, all of these he was a past master, yet he could never learn another language. He was stuck with German. He wanted very much to learn English, but he couldn't do it. Very interesting.

We begin with Jacob which means "supplanter." He represents this particular stage of our developing consciousness of mentality and the meaning of his name being supplanter describes the pattern most of us are following in this stage of unfoldment, which is the intellect operating on a supplanting pattern; taking precedence over other things and exchanging certain levels of knowledge, certain quantities of knowledge with greater quantities of knowledge. The intellect right now is sort of storing up facts and knowledge. Of course, that will change later, where our learning process will not consist of that particular kind of activity, because that will have been fulfilled, but for most of us, that is the way it is going on right now.

Transcribed by Margaret Garvin on February 23, 2015.