METAPHYSICAL BIBLE INTERPRETATION OF THE OLD TESTAMENT
This is a series of lectures given by Mr. Edward Rabel, member of the faculty of S.M.R.S.
Fall semester 1975 - 2nd. Yr. Class. Lecture given on September 30, 1975

Learning from Abram, Sarai and Lot...

Topic 26: Lot and Sarai often accompany our awakened and quickened faith in God and Truth, and the three will travel together for awhile.

Topic 27: Egypt was ... the land of the magicians and great, great occult skills ... You'd better watch out when you're there.

We turn, now, to that section of Genesis, which is the first extensive treatment of a character, meaning, then, that Abraham is the first human characteristic, which will receive extensive treatment in the narrative. Now, the sequence, the order, in which these characters, as symbols, will come into our Bible narrative, does not necessarily mean this is the sequence, period, established for man. It just means that the writer is going to talk about this particular thing now; and later on the writer will talk about that particular thing, now. And it happens to have a page number, constituting the sequence of the Bible. This does not necessarily mean that's how it happened to you, that Abraham was the first spiritual quality that you developed, and you developed it in just this way. It only means that this is the way the writer is talking about this. Otherwise, you will insist upon a form of literalism in sequence, here, which may or may not be, although there is a general, overall sequence, which is true of all of us, which is everything is leading nearer and nearer to the advent of the spiritual awareness which Jesus represents. So here we have Abraham which began in Chapter 12.

Abraham ... stands for an awakened, quickened consciousness of awakening faith...

Abraham is the first character dealt with extensively in the Bible narrative, and the word means father of the multitude, and we are told in our dictionary and Mysteries of Genesis that metaphysically he stands for an awakened, quickened consciousness of awakening faith. It is, among other things, also our ability to recognize Truth or Spirit, and to say "Yes" with our mind and heart to it. This obedience is the affirmative power of the mind or the soul of man, is what faith is, among other things. It's more than that, but right now let's deal with that aspect of it.

and when the quickening occurs, when this important faculty is awakened, quickened in us, it is always followed by the awakening, quickening of all the other spiritual faculties.

This ability to recognize Truth, Spirit, and then to respond to Truth as Spirit and then to respond with an affirmative attitude, acceptance, yea-yea saying, and when the quickening occurs, when this important faculty is awakened, quickened in us, it is always followed by the awakening, quickening of all the other spiritual faculties. So, that's where the name, father of a multitude, connects with Abraham, and also Abraham as a faculty. This faith quickened in us has led to, has made it possible for the other faculties of us to be, I won't say developed, but awakened and quickened through our conscious awareness of it, so that now we can see them, claim them, and express through them in a manner which we call spiritual or truth. 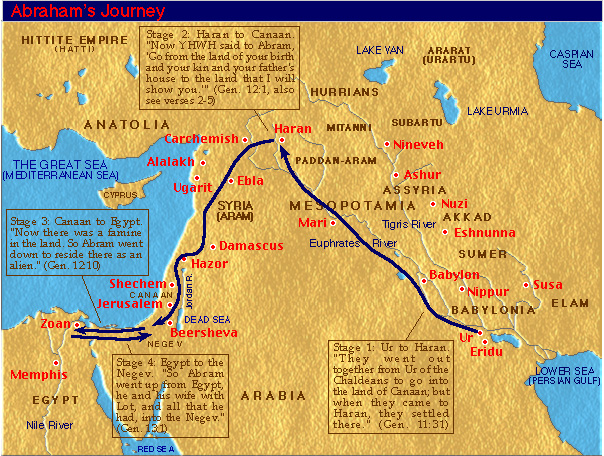 "The Lord hath said unto Abraham, 'Get thee out of thy country,'" simply meaning the present level of consciousness or awareness.

The beginning of the story of Abraham is in these words of the Lord spoken to him, "The Lord hath said unto Abraham, 'Get thee out of thy country,'" simply meaning the present level of consciousness or awareness. "And from thy kindred and from thy father's house unto a land which I will show you." And the father's house mentioned here is not the same father's house spoken of much later by Jesus. Abraham's father's name was Terah, and we read in our dictionary that the word Terah means lingering and loitering. And of course metaphysically his house would stand for a state of procrastination, indifference, mechanical existence. You know that mechanical existing has to be left behind if we're to evolve into what we're meant to be, what we want to be.

Abraham does not argue with the voice of the lord; he does not ask for reasons or explanations, he simply obeys, and this is characteristic of faith. When the faith faculty in us receives truth and spiritual validity, it affirms; there is "yes" in the thinking and feeling as an attitude, and then it becomes a great power. But faith without works is dead; now faith without works is dead isn't as negative as it sounds. It doesn't mean it has died, it's dead. It simply means it's gone defunct or latent, it's inactivated, not dead in outer existence but it's in a state of latency where it will not accomplish that which it could.

Abraham is accompanied on this journey, on this stepping forth in faith, by Sarai, his wife, and Lot, his nephew.

Abraham is accompanied on this journey, on this stepping forth in faith, by Sarai, his wife, and Lot, his nephew. Now the word Sarai means bitter, contentious, argumentative; and this is almost self-explanatory. This obviously is the state of a person's emotional nature or a statement of his unfoldment in any given incarnation, that period when a person's feeling or emotional nature is of this character, Sarai; and it can be married to our faith. We can have lots and lots of faith in God and yet emotionally be very Saraish, ready to argue at the drop of a you-know-what. These are characteristics symptomatic of growth, but not to be stopped at that stage and left as is.

Now Lot is not so easy to understand, because he's a very ambiguous symbol; as a character in the narrative, you can never quite put your finger on what he's supposed to be up to. It never makes that clear in the narrative; why was he saved from Sodom and Gomorrah? What was the meaning of all his wars and things 1ike this; there's a lot about Lot which is not revealed by the writer, and strangely, wonderfully enough, his very name, Lot, means dark, hidden, concealed. He's a very elusive character, and he's a very elusive symbol. We don't know, really what he's supposed to mean. He means one thing, and then he means another thing. We can only take his meaning and interpret the action that he's involved in in a rather isolated way.

These characters, Serai and Lot, both have negative-sounding meanings, that is dictionary meanings, definitions; and to some extent, they are... These two factors, Lot and Sarai, often accompany our awakened and quickened faith in God and Truth, and the three will travel together for awhile.

These characters, Serai and Lot, both have negative-sounding meanings, that is dictionary meanings, definitions; and to some extent, they are. Sarai stands for somewhat unstable conditions of our emotional nature, an unstable state. One of the meanings of Lot is standing for some troublesome things recognized is the subconscious. We know they're there, but we don't know what they are. Lot's there. I have lots of faith in God, but I still have a rather volatile emotional nature. There are still a lot of things about me, which I don't get, yet. There are things going on in me beneath the surface, which are concealed from my level of conscious awareness; and I know these things are causing me some trouble. These two factors, Lot and Sarai, often accompany our awakened and quickened faith in God and Truth, and the three will travel together for awhile. What was the overall state of affairs for these three for awhile, those of you who have read Genesis? They prospered greatly; do you remember that?

These characters, Serai and Lot, both have negative-sounding meanings, that is dictionary meanings, definitions; and to some extent, they are.

Now this illustrates something that many truth students go through, they undergo. A person becomes acquainted with truth and is called and responds with his faith. Then he enters Unity - we'll just use Unity, since that's the one that's important for us - and he has such faith in the teachings, God, Spirit, prayer; but emotionally he's still got a long way to go, and subconsciously there's still a lot of crap, and yet that person with his quickened faith as his leadership, even with all these faults and shortcomings and immaturities yet tagging along, gets all kinds of wonderful manifestations. He's healed a mile a minute; he demonstrates prosperity all over the place; women ask him to marry them around every corner.

All kinds of goodies come into that person's life, and if he's not careful, he's liable to say, "There's nothing me that needs to be changed, corrected, or grow up, since I'm getting all these marvelous results, then, the wise thing to do is status quo. Let's keep me as I now am so that I'll keep getting nothing but goodies." But unless something is done about Sarai, sooner or later, suddenly there's Egypt, and Sarai gets them all in a hassle in Egypt. Here she says. "Oh, I'm in Unity, I have faith, everything's wonderful."

Transcribed by Margaret Garvin on February 25, 2015.