Abram and Sarai in Egypt (Rabel)

METAPHYSICAL BIBLE INTERPRETATION OF THE OLD TESTAMENT
This is a series of lectures given by Mr. Edward Rabel, member of the faculty of S.M.R.S.
Fall semester 1975 - 2nd. Yr. Class. Lecture given on September 30, 1975

Learning from Abram, Sarai and Lot...

Topic 26: Lot and Sarai often accompany our awakened and quickened faith in God and Truth, and the three will travel together for awhile.

Topic 27: Egypt was ... the land of the magicians and great, great occult skills ... You'd better watch out when you're there.

Abram and Sarai in Egypt 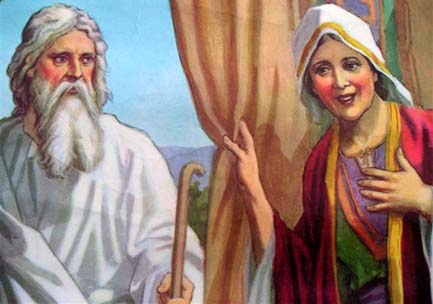 Then - boom. I'm in Egypt, and it is my emotional nature that can get me in a hassle, my immature, unstable, emotions. Sarai gets all this hanky-panky down in Egypt, because she's pretty. Emotions are very alluring. Emotions are very fascinating. Emotions have a strong affinity towards sense consciousness, and sense consciousness tries to make connections with emotions as quickly as possible. Sarai was obviously attracted to Pharoah; what girl wouldn't be, he's the king. He's the movie producer, and what Pharoah represents wants to make connections with emotions. This is metaphysical anatomy, analysis. So, as long as our emotional nature is in that Sarai state, there is the possibility of trouble in Egypt for us.

Egypt, metaphysically, stands for the realm of materiality and sensuality, the realm of it, that realm which produces things which function on the plane of the material. Also, in man's soul, Egypt stands for the realm, of sensation, sensuality. The emotions, then, in their immature and unstable state, would be a natural to get involved with the Pharoah, or the ruling ego on that level.

Egypt was ... the land of the magicians and great, great occult skills ... You'd better watch out when you're there.

In ancient cultures and in ancient religions, Egypt was definitely referred to as the land of magic. It was the land of the magicians and great, great occult skills were exhibited in that country. It's a natural that Egypt would become, metaphysically, that very tricky, very fascinating, very productive realm of materialism and sensuality, which has a great fascination for man, but it's not bad. You'd better watch out when you're there. Remember Joseph? He played the game right, and look where he got. So, all kinds of tricks go on in Egypt throughout the whole Bible. The symbolism is consistent.

Transcribed by Margaret Garvin on February 25, 2015.