How I Found Health (Tract) 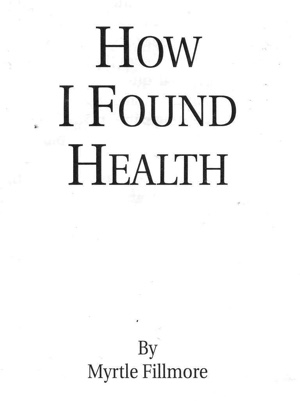 Download a PDF copy of Myrtle Fillmore How I Found Health

I have made what seems to me a discovery. I was very sick; I had all the ills of mind and body that I could bear. Medicine and doctors ceased to give me relief and I was in despair, until I found practical Christianity. I affirmed my beliefs, and I was healed. I did most of the healing myself, because I wanted the understanding for future use. This is how I made what I call my discovery:

I was thinking about life. Life is everywhere—in animals and in people. "Then why doesn't the life in the animal make a body like a human's?" I asked. Then I thought, "The animal has not as much sense as a human." Ah! Intelligence, as well as life, is needed to make a body. Here is the key to my discovery: Life has to be guided by intelligence in making all forms. The same law works in my own body. Life is simply a form of energy, and it has to be guided and directed in a person's body by his or her intelligence. How do we communicate intelligence? By thinking and talking, of course. Then it flashed upon me that I might talk to the life in every part of my body and have it do just what I wanted. I began to teach my body and got marvelous results.

I went to all the life centers in my body and spoke words of Truth to them—words of strength and power. I asked their forgiveness for the foolish, ignorant course that I had pursued in the past, when I had condemned them and called them weak, inefficient, and diseased. I did not become discouraged at their being slow to wake up, but kept right on, both silently and aloud, declaring words of Truth until the organs responded. And neither did I forget to tell them that they were free, unlimited Spirit. I told them that they were no longer in bondage to the carnal mind; that they were not corruptible flesh, but centers of life and energy omnipresent.

Then I asked the Father to forgive me for taking His life into my body and using it so wastefully I promised Him that I would never, never again retard the free flow of that life through my mind and my body by any false word or thought; that I would always bless it and encourage it with true thoughts and words in its wise work of building up my body temple; that I would use all diligence and wisdom in telling it just what I wanted it to do.

I also saw that I was using the life of the Father in thinking thoughts and speaking words, and I became very watchful as to what I thought and said. I did not let any worried or anxious thoughts into my mind, and I stopped speaking gossipy, frivolous, petulant, angry words. I let a little prayer go up every hour that Jesus Christ would be with me and help me to think and speak only kind, loving, true words; and I am sure that He is with me, because I am so peaceful and happy now.

I want everybody to know about this beautiful, true law and to use it. It is not a new discovery but, when you use it and get the fruits of health and harmony, it will seem new to you, and you will feel that it is your own discovery.