Richard Lynch was ordained a minister in 1937. Besides this profile from Catherine Ponder, see the interview of Richard Billings. 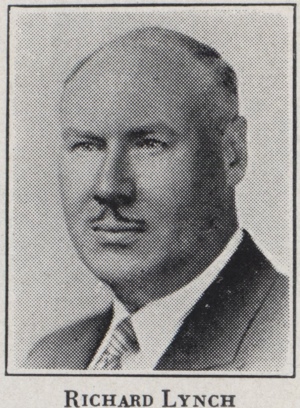 Dr. Richard Lynch was considered one of the most powerful prosperity teachers of the 20th Century. Legend has it that he had a "Rags to Enrichment" story.

It has been reported that he first was employed by Myrtle Fillmore to work at Unity School at a time when as a young man, he was literally penniless. It has been further reported that he had one pair of pants, which he placed beneath his mattress every night, in order to keep them properly creased.

Myrtle Fillmore, "the mother of Unity," was gifted with the spiritual insight to sense the potential of various young people, whom she encouraged. Many of them later became outstanding spiritual leaders during the 20th Century. She encouraged Richard Lynch to study with Charles Fillmore while working at Unity School.

Gradually Richard Lynch developed as a Truth student. The time came when Charles Fillmore finally said to him, "You have studied the Truth with me long enough. Now is the time for you to go out and prove it. I feel you're spiritually destined to pioneer a Unity Center in New York City."

Richard Lynch is said to have protested, "But I have no money for such a project." Charles Fillmore replied with confidence, "Faith moves on substance, so the Lord will provide as you go forward in faith." Richard Lynch obediently went to New York City and checked into a hotel room, not knowing how he would pay for it. He stayed up all night praying and meditating upon God as the Source of his supply. About dawn, he felt exhausted and fell asleep. When he awakened near noon, he noticed that an envelope had been slipped under his door. In it was an anonymous gift of cash sufficient for him to rent quarters and start Unity in New York City.

He immediately began giving lectures on prosperity and success. His students were so enthusiastic about his various lecture series that they suggested he write books based on those lectures. Among his most popular books were Work and Supply written in 1924 and dedicated to Charles and Myrtle Fillmore; and his book, Mind Makes Men Giants written in 1926. Although both are now long out of print, they are often found in New Thought libraries. As he continued to develop his prosperity consciousness, he attracted many of the old monied families of that era. While his Unity work began to thrive, his newfound friends helped him invest his personal income wisely. When the stock market crash came a few years later, his investments were not affected—thanks to the knowledge and advice of his well-to-do friends.

Later one summer he felt guided to turn his Unity work and his personal financial affairs over to an assistant, while he went into seclusion to write one of his prosperity books. When he returned in the fall, he quickly learned that under the supervision of his assistant, he had lost a quarter of a million dollars. He replied, in his unflappable way, "Never mind. God is the Source of my supply, and He will provide." He was later credited with saying, "If I did not tithe, I would be in the poor house." His resources soon returned to normal.

The now famous Florence Scovel Shinn was from a prominent Philadelphia family. She studied with Richard Lynch and later taught classes in his Unity Center. During that era she wrote her long time best seller, The Game of Life and How to Play It. (Available through DeVorss Publications)

During that era, a member of our Birmingham congregation attended a retreat at Unity Village, Missouri. He heard that Richard Lynch, now retired, was in residence at his Unity Ridge home near the Village, but that he was not seeing anyone. Nevertheless, that retreat attendee bravely made his way to the Lynch home, where he was personally greeted by Dr. Lynch. They spent an afternoon visiting.

Richard Lynch told his visitor that during his time of serving Unity in New York City, some of his wealthy friends offered him a gift of two million dollars with which to build a Unity church there. Dr. Lynch said he declined their offer because he wanted to be free to teach and write about the prosperous Truth; and that he did not want to be concerned about outer distractions such as church administration.

I never had the opportunity to know or study with Richard Lynch at Unity Training School. He had retired by the time I arrived. However, I did chance upon a stack of his Unity of New York weekly church bulletins many years after his retirement. In them Francis Scovel Shinn was listed as one of his prosperity teachers. I also noted that on the back of every bulletin, a prosperity paragraph was quoted, either from his writings or that of another prosperity author. Those excerpts were always a source of illumination and inspiration to read. I thought, "What a clever way to teach prosperity on a regular, wide-ranging, yet private basis."

Regarding Richard Lynch's teaching prosperity at Unity School, the story has often been related of how he conducted a small "closed prosperity class" for a select group of students in the Unity Tower. His unique method was to teach the class at 6 A.M. Any Student who arrived even one minute after 6 A. M. was not allowed into class. Such restrictions made his classes even more desirable, and stressed the importance of prosperity teaching.

I trust there will be a number of teachers, ministers and writers who will carry forth the power of the prosperity teaching as emphasized by the New Thought movement. Dr. Emmet Fox, a Divine Science minister and writer of note, once said, "The Truth Movement is the only thing that will save the world from its ills. Everything else has already been tried." And during World War II, Charles Fillmore, also a prominent prosperity teacher, said, "If the people of the world knew the laws of prosperity, there would be no more wars."

So I invite you to join me in using anew the spiritual principles of prosperity—and sharing them with others—as we celebrate anew one of the most outstanding prosperity teachers, writers and ministers of the 20th Century, Richard Lynch.