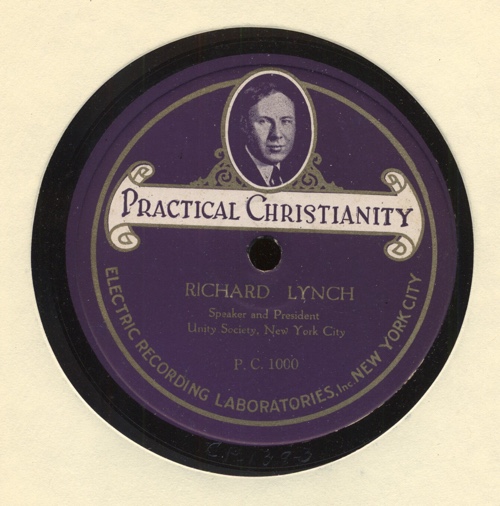 Here is something very special... a 3 minute, 30 second recording of Richard Lynch, speaking on the topic of Practical Christianity. It was produced and published by the Unity Society of New York City, which I believe was Richard Lynch's ministry in New York.

The 78 rpm phonograph, from which this .mp3 recording was made, is at the Unity Archives. The digital audio file was captured in March 2017 and the transcript was done in May 2017. The audio has a few places where the content is unclear. Let me know if the transcript needs correcting.

I hope you are inspired and blessed by this recording.

The keynote of Practical Christianity is the putting into practice the truth which Jesus Christ taught and demonstrated. The philosophy of the master is practical because it can be proved in every human experience. Christianity can be applied with desired results to all the commonplace affairs of the everyday life. It is the true [inaudible 00:00:36] mankind's [inaudible 00:00:38] from all sins, sickness, sorrow, poverty and death. The 20th century is demanding this practical application of Christianity because this is the age of things practical. And what could be more vital today that the message of health, happiness, opulence, light and of harmony? The result of this living truth is the complete regeneration of man's mind, body and the faith.

Practical Christianity places a new emphasis upon the teaching of Jesus, yet it is ever faithful to the Christ principles set forth in the original and primitive Christianity. There is a divine law, which governs prosperity. It is the law of giving and receiving, as taught by the master. And practical Christianity teaches the principles of abundance. Jesus' attitude for supply was, "All that the Father hath is mine" (John 16:15). Man's inheritance is in fullness of all good. And this prosperity is brought about by first seeking the kingdom and its righteousness, then all things needed will be added unto him (Matt. 6:33).

Every true disciple of the great physician tries to fulfill the command, "Heal the sick" (Matt. 10:8). Then naturally, Practical Christianity stands for healing. Sickness and disease came into the world as a result of some form of sin. Consequently, Christian healing has for its basis, the forgiveness of sin. We have come to know that there is only one way to eminent health. And that is through spiritual healing. "In my name", says Jesus Christ, "Shall they heal the sick" (Mark 16:17). This applies to any condition of ill health. Bear in mind that "all things are possible to him that believeth."

Practical Christianity establishes the kingdom of the Heaven upon the Earth by applying Truth to all human problems. One of these problems is the last enemy to be overcome. That is death. The Christ's teaching is that death can and must be overcome. Remember these words: "I am come that they might have life, and have it more abundantly" (John 10:10). "I am the resurrection and the light" (John 11:25). This is the message of Practical Christianity.