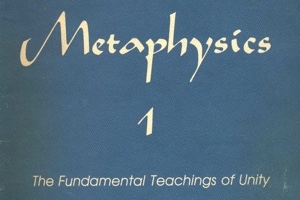 The Trinity has been meaningful to Christians in one way or another for centuries. To many individuals it signifies a great mystery. To us in Unity, the Trinity of Father, Son and Holy Spirit represents the three primary creative aspects of Being, which we interpret metaphysically as Mind, Idea, and Expression.

In the following chapter, we will explore the metaphysical implications of the Trinity so that we may better understand the creative process in God and humankind.

"The Holy Trinity is known as the Father, the Son, and the Holy Spirit. Metaphysically, we understand the Trinity to refer to mind, idea and expression ..." (Keep a True Lent 14).

Metaphysically interpreted, the Trinity not only describes the reality of God in relationship to humankind, but also represents the reality of the creative process by which a divine idea becomes manifested or formed.

Ed Rabel handwritten note: "The doctrine of the Holy Trinity is simply naming the three aspects as which a HUMAN MIND perceives the omnipresence of God. The Trinity is in the HUMAN MIND, not something "out there.""

"The Trinity is not three separate gods but one God in three phases of expression. As the divine Creator, God is Father; as the divine Self in man, He is Son; and as spiritual life and power in activity, He is Holy Spirit (Be Ye Transformed 18).

"The Father is Principle, The Son is Principle revealed in a creative plan. The Holy Spirit is the executive power of both Father and Son carrying out the creative plan. Thus we might also say that Father is Being in the absolute, the unlimited, the unrelated. Son is the I AM identity of Being… The Holy Spirit is the law of God in action" (Talks On Truth 134).

The key to the mystery of the Trinity is to remember that the terms Father, Son, and Holy Spirit are not separate things, but simply three aspects of our one God.

4C FIRST IN THE TRINITY:

"God is first in the Trinity. God is mind and is everywhere present. God is principle, law, Being, Spirit, All- Good, omnipotent, omniscient, omnipresent, unchangeable, Creator, Father, cause, and source of all that is. God as Spirit is forever accessible" (Keep a True Lent 14).

First in the Trinity is God, the Absolute - the unlimited, unconditional transcendent aspect of God.

4D SECOND IN THE TRINITY

Ed Rabel handwritten note: "The perfect idea in GOD MIND of a perfect being."

"An idea is the original primary, or unlimited thought of Being: in God-Mind, the eternal Word or Logos" (Keep a True Lent 172).

"The Christ is God's divine idea of man, the embodiment of all divine ideas existing in the mind of Being" (Keep a True Lent 10).

The second aspect of the Trinity is the composite divine idea which we refer to as the Word of God, the Logos, or the Christ Idea. It is the Divine Presence individualized in all of God's creation and contains within it the power of self-expression.

4E THIRD IN THE TRINITY:

"The Holy Spirit is the action or outpouring or activity of the living Word. This activity produces what may be termed the light of Spirit, the breath of God, the 'personality' of Being" (Mysteries of John 19).

This third aspect of the Trinity refers to the creative activity or the "whole Spirit of God" which enables us to experience and express our divine potential in ever increasing ways.

At the bottom of the section, Ed adds this:

We are seeking to relate to the concept of the Trinity in a mystical way. The Trinity is a living reality which we are meant to experience not only intellectually but on every level of our being. Discussion about the Trinity is certainly appropriate as long as it is balanced with prayer and meditation. As our prayer life becomes more consistent, we will find comfort and wisdom as a result of our increased spiritual understanding.

IN UNITY WE ACKNOWLEDGE THE THREEFOLD NATURE OF GOD AND INTERPRET THE TRINITY METAPHYSICALLY AS MIND, IDEA AND EXPRESSION. WE REFER TO THIS TRINITY OF GOD AS *THE CREATIVE PROCESS*.

FIRST IN THE TRINITY IS *MIND* - THE ABSOLUTE, TRANSCENDENT ASPECT OF GOD.

SECOND IN THE TRINITY IS THE DIVINE *IDEA* OR "WORD" OF GOD. IT IS THE ASPECT OF GOD WHICH IS THE SPIRITUAL ESSENCE INHERENT IN ALL OF GOD'S CREATION.

WHEN WE SPEAK OF THE TRINITY WE ARE NOT REFERRING TO THREE SEPARATE BEINGS, BUT THREE WAYS OF ACKNOWLEDGING THE ONE BEING - GOD.

IT IS IMPORTANT TO KEEP IN MIND THAT THE TRINITY IS A MYSTICAL CONCEPT AND MUST BE UNDERSTOOD IN THE LIGHT OF PRAYER AND MEDITATION.

THOUGHTS FOR REFLECTION AND MEDITATION

Transcribed by Allen Watson on November 6, 2015.