Why does God, allow evil and suffering?

Unity and the problem of evil.

Religion in general, and Christianity in particular, is often criticized for what is known as "the problem of evil." People ask "why would a loving God allow tragedy to happen?" When no satisfactory answer comes, the conclusion is often made that either God is not loving or that God has no power. So the problem of evil often leads to a rejection of religion and a life of faith.

Unity is especially vulnerable to this type of question because of our central claim that there is "One Power and One Presence, God, the good, omnipotent." In other words, we proclaim that God is both loving and powerful — and we make that proclamation the center of our faith. I am not sure that Unity's answer to this "problem of evil" is any better than that of Judeo-Christian religion. However, I believe that Unity is much better equipped to deal with the problem of evil than mainstream Christianity. The reason this is so is because of what we have come to call the 3rd Unity Principle.

What the 3rd Unity principle does not say.

Rather, the 3rd Unity principle says that we create our experiences by the activity of our thinking. There is a world of difference, literally.

When I ask "Why did God allow me to get cancer?" I am really asking about the physical world of conditions. The world of conditions is real enough and it is not an illusion. We'll get back to that in a minute. But for now, just know that Unity's teaching on a direct correspondence between our thinking and our conditions has been ambiguous.

But when I ask "How can God transform this tragedy into good?" I am then asking about the mental world of experience. About the world of our experience, Unity has much to say.

The world of experience is how we have learned to respond to the world of conditions.

As said above, Unity teaches from a perspective of One Power, One Presence, God omnipotent, all good. What this means in practical terms is that:

no condition and no tragedy — from the common cold to unspeakable abomination — is outside of the realm of God to be transformed into greater good — when we align with God and apply our Christ-like nature to the condition.

We do not cause all conditions and we can not prevent all tragedies. But we have the capacity to respond to imperfect conditions and tragedies in transformative, divine ways — ways that transform them into all good. That is our claim.

What this teaching provides is hope. It says to all people, regardless of the conditions of their life — the victim of cancer, the refugee of war, the parent of a lost child, the poor, the lost, the downtrodden, and the "wretched refuse of our teeming shore" — it says to them, we are one with God, we are by nature compassionate and good and that we are empowered by our unity with God to transform all conditions to the perfect image and likeness that emanates from God-Mind.

Where we are different from most of Christianity

We do not stop at the declaration that we are made in the "image and likeness of God." That declaration is common to all Judeo-Christian tradition. While being made in God's image does establish a "dignity" of the human being, the declaration leaves to a transcendent God the task of cleaning-up the conditions and tragedies of life.

Like Jesus, we are called, not to ask "Why did this happen?" but rather to ask "How can this be transformed into good?" How can we heal? How can we empower? How can we love? How can we prevent war? That is the work and practice of anyone involved in Metaphysical Christianity.

Where we are different from most of contemporary culture

Perhaps, for some, it is also the calling that we heard nearly fifty years ago from Robert Kennedy: "There are those that look at things the way they are, and ask why? I dream of things that never were, and ask why not?" Like Kennedy, Unity and Metaphysical Christianity are idealistic — we do not fall for the existentialist teaching that we are separate from our essence and that we must live in angst.

Many or most people in my classes do not know what is meant by "existentialist angst." It is a pervasive sense of cynicism and loneliness that has risen in human culture over the past 100-150 years, largely because science has kicked out from under us a sense of the order of life and because industrialization and war has replaced an earlier sense of order with a sense of chaos, separation and fear.

Myrtle Fillmore responded with "God is my all, I know no fear, because God and truth and love are here." That is a radical statement for anyone living in contemporary culture. You don't need me to tell you about the Fillmores, nor do you need me to tell you how the claims of Metaphysical Christianity differ from the cynicism of modern culture.

I only want to stress how important it is that Unity not "chase after culture" — that if there needs to be a healthy skepticism in Unity, it needs to be toward the persistent practice in Unity of providing a platform for cheap, simplistic New Age solutions to sickness, poverty, dispair and hate. As I said at the start of this post, evil and suffering is not an illusion, as is commonly taught in much of New Age.

The mission of TruthUnity is to engage culture in the digital age — cultivating awareness, practice and commitment to the teachings of Unity. In a few months — March 24 and 25 — two back-to-back mini-conferences will speak to these issues.

The Unity and Christianity 2017 mini-conference explores, proclaims and promotes Metaphysical Christianity as an authentic and distinct expression of the historic Christian faith. 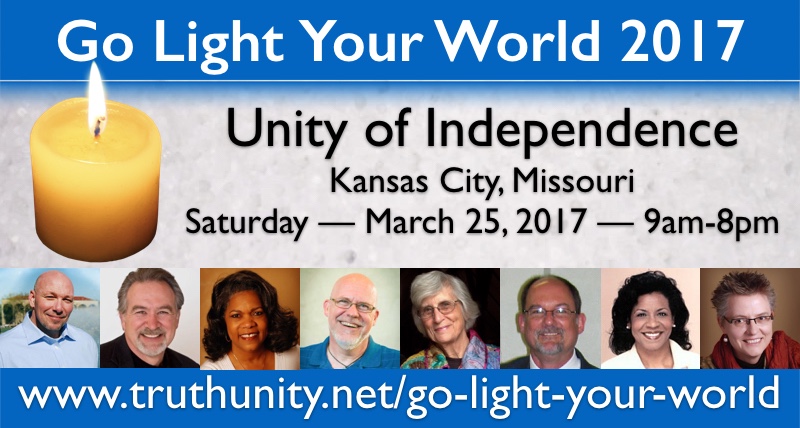 The Go Light Your World 2017 mini-conference explores and celebrates ways that Licensed Unity Teachers and others in Unity may launch ministries that directly engage culture with Unity's message of wholeness, empowerment and prosperity.

This mini-conference is meant to be a conversation by and for those who would engage culture with Unity's message. We hope to "paint a picture" of what engaging culture looks like from the perspective of those who are doing the work. The content of this mini-conference is given by eight people who have deep experience in directly engaging culture with Unity's message of wholeness, empowerment and prosperity. Their ministries directly impact youth, women, men, peacemakers, the imprisoned, the hungry and others.

If the affirmation given above resonates with you — that no condition and no tragedy, from the common cold to unspeakable abomination, is outside of the realm of God to be transformed into greater good when we align with God and apply our Christ-like nature to the condition then I hope you will click through on these links and register for one or both of the conferences.

An evolving understanding of metaphysical practice

In an earlier version of this post, I made the statement "Unity has never taught that the world of our conditions is caused by the activity of our thinking." That was not correct. Many great Unity teachers taught exactly that for decades.

For example May Rowland is reputed to have stood on the Unity bridge commanding a nearby tornado to shift course. More troublesome were stories about people who were embarrassed to be sick if they worked for Silent Unity. A friend with deep roots in Unity responded to this post by saying that her teachers, some of Unity's best, used to respond to things that happened with the phrase, this has occurred by "right of consciousness."

I don't know how much can be placed at the feet of Charles and Myrtle or how much should go to their zealous students. But it's been going on a long time, and it's not unique to Unity.

Contemporary writers like Barbara Ehrenreich, Brene Brown and Kate Bowler point out the problem with such thinking. A reviewer says Ehrenreich "exposes the downside of positive thinking: personal self-blame and national denial", Brown writes that "shame erodes our courage and fuels disengagement" and Bowler's heartbreaking New York Times op-ed shows how far out in the weeds this healing business can take us.

These are critiques of the notion that our thinking creates our conditions. However the notion that our thinking enhances our ability to respond to tragedy and to transform conditions is becoming better understood and more substantiated. Barbara Frederickson and George Vaillant have identified how positive emotions enable us to overcome life challenges. What they have discovered not only supports the notion that we are called to transform tragedy into greater good, but their discoveries also provide deep insight into how we do that — through the twelve powers.

Our understanding has matured. My point in bringing in these five writers is to say that the change hasn't occurred only in Unity. My Unity friend says that we have moved beyond "metaphysical malpractice" to a deeper understanding of spiritual principle. The older understanding is still valid — if it works for you — but there is another way in case it does not.

How one woman brought her son back to life

I will close with a short video clip that illustrates in a moving and beautiful way our Christ-like human capacity to transform tragedy into good.

Here is a clip from George Vaillant speaking at the Gel 2008 conference.The story he tells in this clip describes our capacity to transform tragedy into greater good.

I believe that each of us, when we joined our Unity church, signed-up for learning to apply the 3rd Unity principle. But the gift of transformation is not just for manifesting our own affairs.

The world of conditions is not an illusion. People suffer today. We are called to alleviate that suffering by engaging culture with Unity's message of wholeness, empowerment and prosperity and with our own capacity to transform tragedy into greater good. Transformation of tragedy into greater good is where works of consciousness overlaps works of love, peace and justice.