Karma in the Golden Pyramid

KARMA IN THE GOLDEN PYRAMID

It is with considerable hesitation that I include this chapter, inasmuch as the data incorporated is in many cases intensely personal. The truth is, though, that all who have supported the erection of this New Age Temple, even if only with the enthusiasm of their thought, have played a part in the resolving of certain karmic situations in their lives and in my own. I give thanks to you and to God, because your support has been essential to the resolution of certain difficulties which have been building through many lifetimes. Your support constitutes the erasure of some karmic debt — whether because we have been associated in similar projects in past lives, or because your soul simply needed the experience of supporting a spiritual project that would take you beyond the limitations and karmic indebtedness of personal self-interest.

Though it takes many forms, karmic debt is incurred in only one way, and that is by failing to love oneself, others, or one's God; for we "owe no man anything but love," and "love is the fulfilling of the law" (Rom. 13:8).

Before the design of our new church edifice had been publicly announced, two clairvoyant investigators had independently arrived at the conclusion that the soul-entity of Joseph Smith, Jr., founder of the Mormon Church, was now expressing earth-life as "John Rankin." Although Divine Mind has permitted me some glimpses of past-life experience, I have not been granted any personal verification or contact with that lifetime, if indeed it actually be mine at all. Anyone in the metaphysical public eye is often the recipient of unsolicited psychic information. A metaphysical teacher is probably as good a sounding board as any for expression of expanding faculties of perception. I always take such information seriously, but I do not always accept it. I am much too aware of the deception potential inherent in the astral plane to do so.

Certainly if I were choosing a reincarnational "ancestor," I might have chosen a more consistently admirable personality, though I could have hardly chosen a more colorful one! 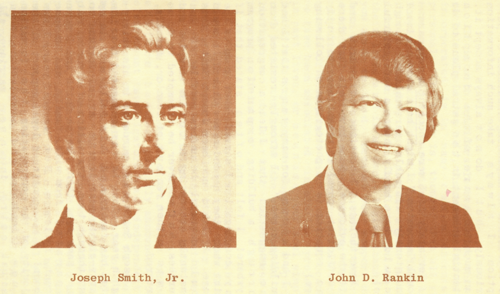 Nevertheless, I continue to search and sift the evidence. Some have felt that there is sufficient physical resemblance to verify the equation.

I had known for many years that I had "building karma." I strongly resisted even the suggestion that I lead a congregation through a building expansion program anywhere! I felt and often stated that if any congregation I served ever grew to the point where they needed a new church, I would leave. If I had once been Joseph Smith, this would certainly be understandable. He was constantly attempting to build temples and churches, but whenever he attempted to do so he was either run out of town or, finally, martyred.

Joseph Smith was murdered in his thirty-eighth year. Thus he was separated from his wife, his family and his followers. In my thirty-eighth year it was my misfortune to pass through the transition of divorce. At the same age, then, Joseph Smith and I were separated from wife, family, and to some extent, followers. But in that year, I was reborn! The continued loyal support of the majority of the congregation, the formation of new friendships and associations, and eventual entry into a new marriage, all brought about a rebirth of consciousness. Despite the joys of growth being experienced, there was often an undertone of being on the verge of death. This became particularly pronounced in the weeks immediately proceeding the revelation of the pyramid vision. Might it be that the first thirty-eight years of my life were years of correcting errors accumulated in a life as Joseph Smith, and that now, at last, I am entering into a new life? Many members of the Unity congregation would testify that it is so. As for myself, I cannot judge. 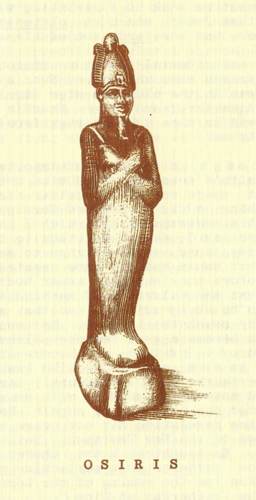 Why should I, of all people, be inspired to suggest the latter-day construction of a replica of the Great Pyramid of Egypt? Although I have dedicated myself to the Unity movement, whose traditional symbol is the winged solar disc, an ancient Egyptian emblem, things Egyptian have always created in me a feeling of repulsion. At one time I studied within an occult fraternity whose mythos was thoroughly Egyptian, and I had to withdraw because of a feeling of psychic discomfort. I often twit my wife for her fondness for Egyptian foods — leeks, garlic, cucumbers, and melons (see Num. 11:5). While she heartily enjoys these foods, I never have been able to control adverse digestive response to any of them, even though melons in particular sit well on the palate. I am just now getting use to my own personal face. My wife has remarked from time to time, that it is a good face, an Egyptian face! The cut of the Egyptian god-form to the left may reveal some similarity in bone structure, supporting this wifely observation.

Joseph Smith, on the other hand, had a deep fascination with things Egyptian, even to the point of securing a fragment of hieroglyphic papyrus depicting some very ordinary sequence of events, and claiming that it was the lost manuscript of a secret scriptural book, The Book of Abraham. He was intrigued by those facets of Masonic lore and ritual which echoed Egyptian initiations, and he incorporated much of this into the temple rites of the Mormon Church.

Joseph Smith so closely identified himself with the Old Testament Joseph, that he asked that his tomb bear the inscription: "The tomb of Joseph, a descendant of Jacob."

During the time I was preparing this book, I dreamed that I was taken to a place where a large stone had been cut, and at the center a narrow opening. A voice said, "This is the vault of Joseph, where the greater initiations take place."

This sent me back to the Bible, where I learned that Joseph was the eleventh son of his father, but the first son of his mother.

Although in a number of important ways Joseph Smith's teachings and mine are widely divergent, there are also peculiar strands of his teaching which sounded foreign to the ears of his contemporaries, which I know with strange and deep conviction to be true, though they are still strange to many. He taught that human spirits were created by the Father before they entered human bodies. He taught that the salvation of mankind is ultimately to be universal, so that all may eventually reach the Light. He taught that man can become a god because "like begets like" and the child can become like his father, so man can become like his Father, God. He taught that opportunity for salvation does not terminate with death. He experienced the ministry of angels. He taught that divine revelation did not cease with the completion of the New Testament, but is still going on. He taught that the chosen people were to be gathered in a particular place in preparation for the coming of the Lord, calling it the "gathering of Zion."

After coming to Houston, and sensing the very special atmosphere which prevails in consciousness here, I have often remarked to friends and family, "Zion is being gathered in Houston!" These have been important facets of my teaching ministry.

At the same time, perhaps the Pyramid is being constructed to reach greater numbers of people with certain ideas which reverse the teachings of Joseph Smith. Without entering into the debate as to whether or not he personally practiced plural marriage, it is unquestionable that he was particularly sensitive to the importance of sex and to the relationship between spiritual and sexual energy. Humanity is in great need of intellectually clear and spiritually correct teaching along these lines at this time.

It is incredible to me that the Father, Son, and Holy Ghost are three bodily personages, as he believed. Yet it is important for us to understand now that God does have a body, and that the universe is that body. It is equally important, however, that we understand that even as man is more than his body, so is God more than His body.

It would seem that both Joseph and I have missions which involve going "down into Egypt," to form an alliance between Egypt and the promised land. Metaphysically, Egypt stands for the body and the subconscious mind. Many forms of metaphysical teaching have either ignored the body, slighted it, or emphasized it at the expense of the spirit. It seems to be a part of Joseph's work and mine to attempt to incorporate a knowledge and appreciation of the redeeming and redeemable qualities of the subconscious and of the human body as vehicles of Light.

If, in truth, there is a reincarnational link between this man and myself, then it would seem quite clear that the construction of the Golden Pyramid is an opportunity for this entity to so teach and so build as to win a measure of acceptance from the community, even among those who do not accept the teachings; and yet to do so without regard or deference to the presence or absence of such approval.

At the same time, since so much karma is group karma, it would seem that those who follow the teachings now being given would, in great part, have been followers of Joseph Smith; who need to learn to distinguish between the Message and the messenger, giving the Truth their fullest and most unquestioned loyalty and obedience, while making peace with the fact that the messenger is but an "earthen vessel."

It would behoove us to remember that those who seem to give opposition to either the Message or the messenger may be those who opposed Joseph Smith in another life, but also numbered among them may be those who blindly followed and supported him without extricating the validity of the Message from their adulation of the messenger. In all cases, souls must be awakened to see that it is universal Truth which awakens their love and high regard, while the messenger can never be more than a transitory vehicle of the Eternal One. It is always the function of the messenger to call attention to the Message, which can only be read by turning the gaze inward and upward to the ever-present all-revealing Christ, who dwells in every man.

Therefore, inquiry into past lives, yours or mine, must always be subordinated to a greater question: "Am I a re-embodiment of the Spirit of the Christ? Is the Christ-teaching being made the very heart and soul of this incarnation?" Anything less is inadequate; anything more is unimaginable.