The Power of the Name by H.B. Jeffery 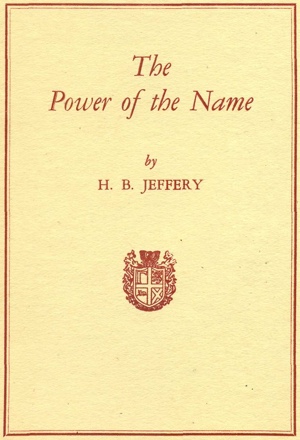 The Power of the Name
By H.B. Jeffery

Download a PDF H.B. Jeffery’s The Power of the Name

It has been declared, and well proven, that every letter, every word, and every name has within itself a certain potentiality and power which—when that letter, word, or name is spoken—goes forth as a vibratory force and is registered in the ethers.

Not only is it recorded in the ethers but, firstly, it is felt throughout the whole body of him who speaks it.

We have long been taught that our every word is recorded in our body. In fact, the enlightened of all ages have declared this to be so. But mankind has been reluctant to accept this as true.

There is a name “far above all principalities and powers,” (Eph. 1:21)—a name which the sacred Scriptures say, “every tongue shall confess” (Phil 2:11). It is the name of the only begotten of God: JESUS CHRIST.

Hidden in the name Jesus Christ is the secret of all power in heaven and on earth; and to him who will enter into that name it will be given him to know the mysteries of the kingdom of heaven.

How shall we enter into The Name? By intending our mind toward it; by repeatedly speaking it; and by meditating upon it.

Since every name, when spoken, vibrates throughout our whole body, then this Name when spoken shall move every cell and atom of our being, and set them to a rhythmic movement in harmony with Itself.

As repetition of any name serves to fix it in the mind, so also will our repetition of the everlasting one establish the vibratory action of that Name as a moving force in the body.

And if that Name be much dwelt in, the power of it shall become the major force within us—until we shall no longer hold the Name, but the Name shall possess and sustain us. Thus do we become imbued by it; thus are we buried in it; thus are we absorbed in it;—baptized into the name of Jesus Christ. And only as we become baptized into it shall we know its mighty power and significance.

The man who bore that name was given it because he was the embodiment of the principle. He was not named by his mother. She was told what his name should be before he was born. “Thou shalt call his name JESUS: for he shall save his people from their sins” (Matt. 1:21).

Out from the Silence came this name. He, from his childhood, seems to have known its meaning, and from the beginning determined to live up to it. It means GOD WITH US, EMMANUEL, THE WONDERFUL, THE COUNSELLOR, THE MIGHTY GOD. (Isa. 9:6)

If we study his life, we see that he never lost sight of the meaning of his name, and never wavered from his determination to reveal its significance and power.

So truly did he live it that he became “the fulness of the Godhead bodily,” (Col. 2:9) the Saviour and the Redeemer of the race. Being true to his name, he made manifest his oneness with the Father, and declared this truth, saying, “I and the Father are one” (John 10:30).

In so knowing and doing he learned the Unspeakable Name, the Lost Word. This he must have possessed in order to do the works that he did; or rather, those works which were done through him by the Unnamable One.

“The Father that dwelleth in me, he doeth the works. Believe me that I am in the Father, and the Father in me.” (John 14:10)

So, as an access to it, he gave his own name, requesting that his followers dwell in his name until the secrets held by him should be revealed to them, even until they came into the same mind that he had and were possessed of the same spirit.

We invoke the nature of that which we behold and whose name we repeat. So we come into possession of the wisdom and knowledge that Jesus possessed if we behold him and repeat his name. Then the mysteries of the kingdom of heaven are revealed to us.

Desiring that all might be and know what he was and knew; and wishing to give to all whatsoever the Father had given unto him, he said: Abide in my name.

Jesus told the disciples to tarry in Jerusalem and abide in his name. They did so for six weeks, and in the seventh week the power of the Holy Ghost came upon them.

They then went out to teach and preach the purport and burden of their whole doctrine—which was the power of His Name. In his name they did mighty works: the healing of the sick, the casting out of demons, and the raising of the dead; as Jesus had commanded them to do. (Matt. 10:8)

What Jesus did, and what they did, we shall do also if we have become baptized into his name and have come into his understanding.

As we shall take upon ourselves, and into ourselves, the name Jesus Christ, there will enter into our minds a new perception and a new power of understanding whereby we may know all things—for the Holy Spirit will guide us into all truth; and there will enter into the body a higher power transcending any power possessed by any man who lives in the physical consciousness only.

The mind will be renewed and the body transformed. Old things will pass away. For, “He that sat upon the throne said, Behold, I make all things new” (Rev. 21:5).

We shall be reborn and become new creatures: children of the Light, all glorious; having a quickened capacity to attain the unity of faith and the knowledge of God’s Son, even unto reaching that measure of development which belongs to the completeness of Christ.

No longer as children, but as full-grown men in Christ Jesus shall we ascend “unto a perfect man, unto the measure of the stature of the fulness of Christ” (Eph 4:13).