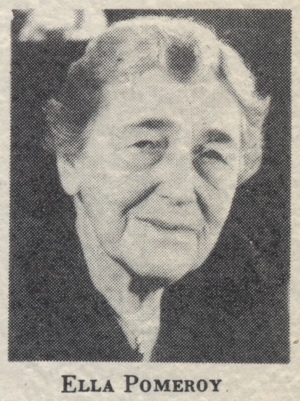 A biography sent to Unity by Raymond Charles Barker in 1958

ELLA POMEROY, born in St Louis, Missouri, June 2, 1868. Father settled in New York City, and what public school training she had, was received there. At about her fourteenth year, her father who was a reader of Herbert Spencer, and was convinced that women were about to begin to plan an active role in the business world, took her out of school and put her into his office to begin her training as a business woman. Her mother had escaped Missouri Methodism, very strict at that time, and immediately put the child into dancing school to counteract the "degrading" influences of the business world; and for some years, the mother took her to hear the unusual speakers in the City of New York - Felix Adler and others of that type.

Then about 1888, the mother and children were in Saratoga, N.Y. when the mother purchased a ticket for a course of lectures at the United States Hotel, to be given by a certain Emma Curtis Hopkins; and Ella absorbed more of the teaching than she might have been expected to do, for she took her business "career" very lightly, her "beaux" even more lightly, but she was reading all along the way.

The managers of Mrs. Hopkins at that time asked Ella if she would like to be in their office in New York City, where they intended to open a reading room; and the offer was snapped up, even if the cash offered was in the bracket with the "five and dime" girls at that time. One entire winter was spent in that office when the mother decided that the girl had better cease going there because of the nature of private affairs that were told her. So, Ella branched off into theosophy, heard W. Q. Judge, Ursula Gestefeld, Samual Colville and doubtless others whose names are now forgotten. About that time Ella made an attempt to become an Episcopalian, but the training did not "take". What she had gathered from the twelve lectures by Mrs. Hopkins, while overlaid for some years by other interests, had sunk deep.

Then came association with a remarkable club, known as the Social Reform Club which included in its membership such men as were prominent in advancing social interests, including the founder of the Seaman's Union, and Samuel Gompers. She listened to Theodore Roosevelt when he was Police Commissioner, and met Eltweed Pomeroy, already known as an ardent advocate of the Initiative and Referendum. Becoming interested in the idea and its advocate, she married him in 1898, on December 10th, in St. George's Church in New York City. 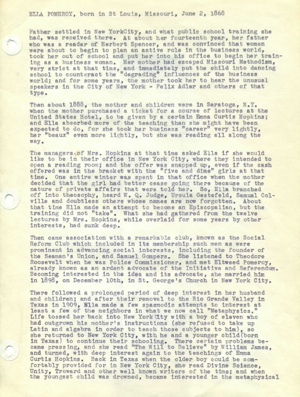 There followed a prolonged period of deep interest in her husband and children; and after their removal to the Rio Grande Valley in Texas in 1909, Ella made a few spasmodic attempts to interest at least a few of the neighbors in what we now call "Metaphysics."

Life tossed her back into New York City with a boy of eleven who had outgrown his mother's instructions (she refused to take up Latin and algebra in order to teach those subjects to him), so she returned to New York City, with he and a younger child (born in Texas) to continue their schooling. There certain problems became pressing, and she read "The Will to Believe" by William James, and turned, with deep interest again to the teachings of Emma Curtis Hopkins.

Back in Texas when the older boy could be comfortably provided for in New York City, she read Divine Science, Unity, Troward and other well knoi^n writers of the time; and when the youngest child was drowned, became interested in the metaphysical interpretation of the Bible, provided herself with necessary books of reference, and studied alone from 1919 to 1924 when her husband decided to remove to Kansas City, Mo.

There she became interested in Unity, went to classes at Unity Headquarters and shortly started small groups of her own around the city. Then came the starting of the Unity Center of Topeka, Kansas; other classes in the neighborhood of Kansas City, a vacation trip to New York City, for by that time Ella had made an active business connection in Kansas City, and Topeka, and her income made the trip possible. Her husband had died in 1924 in Kansas City, the estate had not turned out well; her son, then the only surviving child of four, had joined her and together they started out to make their way.

In Richard Lynch's Unity Center in New York City, connections were made to start Unity groups in small towns in New Jersey. A Center was started in Stamford, Connecticut (still going), in Montclair, New Jersey (turned over to Gladys Stevenson), help was given in starting one in Hartford, Connecticut, and in sustaining the work in New Haven, Connecticut. Another Unity group was started in Jamaica, Long Island, later turned over to Mrs. Florence Gilmore. Then Ella founded the Unity Society in Brooklyn, New York in 1930, and remained the Leader until November 1950 when she turned the Society over to Miss Betsy Van Allen. She was ordained a Unity minister in 1934

A rare article over Ella's name was published by Unity School during this period; and acquaintance made with the Science of Mind Magazine, published in Los Angeles which welcomed many articles from her pen. Life tossed Ella into Los Angeles and she became well acquainted with the teachers and heads of the Institute of Religious Science in that City. They welcomed her into their fold, Ella talked here and there through these years, across the country, as well As in Brooklyn and the neighboring towns. Summer trips took her to the West Indies, to Georgetown, British Guiana, to Barbados and To Canada, and in all these places she lectured on metaphysics.

In 1954, Ella again established residence in Brooklyn, New York and at the request of Dr. Raymond Charles Barker, the minister of the First Church of Religious Science of New York City, became an associate minister on the staff of his church. She lectured every Sunday evening at the Church and conducted private classes in Religious Science and her specialty - Metaphysical Interpretation of the Bible. She continued all these activities until a few weeks before her death in 1958 at the age of ninety.

Ella Pomeroy
Powers of the Soul
From Medicine to Metaphysics
Unity Minister in 1948: Ella Pomeroy