SOMETIMES when you're away from home a long time, a big lump comes up in your throat and you forget for a little while the Really So and think you're homesick. I did, 'cause a lot of things happened, or seemed to happen, and I wasn't a bit happy, and that's why the lump got into my throat. I don't know how it started, but it felt like a big, black cloud swallowing up the good and bright in everything and everybody and me, too.

I told Cousin Frank I wished I were home, and he said he wished so too, and then I cried and he got mad and tore up the letter we'd been writing to Ned and scattered it all over the carpet. Aunt Susan came in and called him "a bad boy," and said "he worried her to death," and locked him up in the library.

So I came up to my room. Isn't it funny — just as soon as I stepped into my little, white room and shut the door there wasn't any more clouds. It was like the walls and everything in it were saying to me:

Pure and white;
Good is bright;
Love is light:

Then I knelt right down by my little bed and said: "Dear Lord, I'm so glad it wasn't Cousin Frank nor me nor anybody but shadows that acted so downstairs."

I sat in the little, white rocker and kept so still that what Aunt Joy said about darkness and light all came back to me. She said nothing but light could put out darkness, and where the light kept shining darkness could never come. She said the Christ-light was in us, and our true thoughts and words were the rays that went out from us and put out the darkness and shadows made by wrong thoughts and words.

Now I see why I got lost in the dark downstairs today, for when Baby Charley cried and everybody called him "cross," my thought didn't shine out and see that he was good and sweet and not cross at all. And when Aunt Susan got fretted and Cousin Frank got mad, I didn't remember that wasn't the true of them. And just to think of it! I even believed I could be unhappy and homesick. That was such an ugly shadow. If I had only shone out with the thought of love and harmony everything would have come all right.

I see, too, it is because I always hold just good, true thoughts in my little, white room, that the shadows couldn't follow me into it.

I'm so glad; it seems as if it will always be easy to shine after this. I never, never want to forget again.

You don't always know what's coming next. So it's best to feel very certain that God is always on hand everywhere and always. I can't get it all straightened out yet, it was so sudden and looked so dreadful; but I did keep my true thought shining and everybody got over the scare. It was right while I was so happy the other day thinking about letting my light shine that Cousin Frank put his head in at the door and said, "O Trixie, something dreadful's happened to papa, and they're bringing him in like he's dead!" I had to think awful hard not to let my light go out, it was so sudden; but I said, "No, he's not dead; God is life." I told Frank if we'd think about life and keep saying, "Life, life, life," we'd bring him out all right.

Well, after I thought a while, I went downstairs. Everybody was so scared and running everywhere, waiting for the doctor to come. They all said, "He's dead," but I wouldn't believe it. I slipped into the room where they'd put him. Dear Uncle Ben, he did look so white and still, but it didn't scare me any, for I "know." So I got as close to him as ever I could and whispered, "Uncle Ben, Uncle Ben, you're all right. God is your life, Uncle Ben, and you're all right." Then I said "Life, life, life," as fast as I could, and it seemed as if Uncle Ben was coming back and back and back from somewhere 'way off, and he was saying "life," too.

After a while somebody touched me and said, "Little girl, wake up and go into the other room."

It was the doctor; he thought I was asleep. I told him I was just thinking hard. He asked me what I was thinking

about and if I couldn't think somewhere else just as well. Then I told him that I was helping Uncle Ben know he was alive and all right, and if he'd just let me alone awhile I'd show him.

He said it was no place for little girls, and he couldn't go on with his examination while I was there. I asked him to please let me stay there just a little while longer, for Uncle Ben needed me so, and I wouldn't look or anything if he'd let me stay. Then I put my face down on Uncle Ben's and kissed him and told him he was so full of life he couldn't keep still any longer.

I told the doctor — if I were a little girl and he a big doctor — I believed in God more than I did in him, 'cause God was life, and God's life was in Uncle Ben and couldn't be put out, and that's what I wanted to think about.

I kissed Uncle Ben again and whispered to him that he was all right, and then he shivered all over and opened his eyes and looked at me.

Then the doctor took hold of his wrist and said, "He is regaining consciousness," so I went and told Aunt Sue.

Uncle Ben's able to talk now and I stay with him a lot, for he says he likes to have me. The doctor says Uncle Ben's all right now. Why couldn't he said so all the time?

Uncle Ben says there's something about it all he can't understand, for when he was thrown from his buggy he seemed to be thrown clear away from everything into the dark where he just drifted and drifted away out and out like he was on a big, black sea and couldn't feel anything

or care for anything. All at once he heard me calling him and something like a rope of light coming out and out to him across the darkness. When it came near enough he caught hold of it, and then it pulled in and in till it seemed to pull him back into himself, and he felt me kiss his face and heard me say, "You're all right, Uncle Ben." 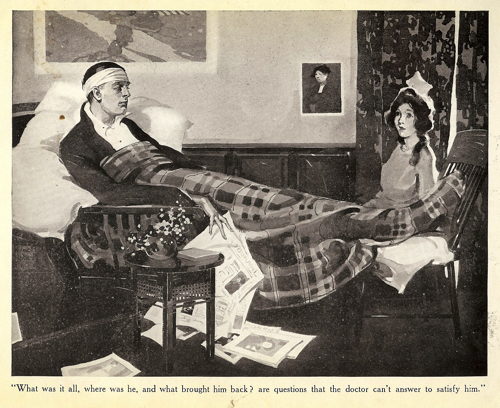 He asked me today if I thought that big, black sea was death. Then I thought about the light and darkness, and told him what Aunt Joy had said; and because everybody was thinking darkness or untruth 'bout him but me, was why he saw my little true words like a rope of light coming to him in the darkness and bringing him back where he could think for himself.

He said, "Trixie, you're a strange little girl, but I believe I begin to understand you. That was a hard knock, but anyhow it's knocked something new into my head."

Then I was so glad, for I knew Uncle Ben was beginning to know.