DR. GRAVE'S come back from Europe. He's been gone six months. "Getting ideas about disease germs," he says. But Aunt Joy says health-makers should get ideas about health, 'cause ideas are the germs that count, and you scatter 'em wherever your thought goes.

Ned saw Dr. Grave first; he was racing down Green Street on his bicycle just as the doctor was getting out of his carriage, and nearly ran over him. Ned said he'd quite forgotten that he was on crutches instead of wheels when the doctor went away, and so had no thought what a surprise he was giving him until Dr. Graves stared at him as if he wouldn't believe his own two eyes, and finally said, "Is it possible this is Ned Day?" Then Ned laughed and said, "You bet it is, and a whole Day, too."

He has been 'round to see us today. It's awful funny to see a doctor who's said for such a long time that your folks couldn't get well, come back from Europe and find what a story he's told; it's funny, too, how he tries to 'splain it all so's to leave God out, and get all his big medicine words in. Why, after he'd 'fessed to Aunt Joy that no doctor could have cured Ned's leg, and Aunt Joy had asked if he didn't think it was the Christ-healing, he got real excited and said: "Why, madam! I wouldn't have

you for one moment entertain the idea that I am in sympathy with this miracle-working fad that is sweeping over the country, deluding the simple-minded and disgracing this age of science. I assure you this case of Ned's is not such an unusual one after all. Our medical journals frequently record cases of this spontaneous healing."

"And how do they account for it?" asked Aunt Joy.

Dr. Grave told her it would be very difficult to 'splain their theory to one not familiar with medical terms. Then Aunt Joy told him she was familiar with Latin, and as she understood it, that was the mother language of medical science, and she would have him tell her all about it.

Such a lot of big words! Ned whispered and told me: "He's a Grave full of dead language." (That's what our teacher calls Latin.)

When he was all through, Aunt Joy was so still, he asked her if she'd found it difficult to understand him. Then Aunt Joy looked at him, just like she does when she's sorry for anybody, and said: "Yes, Dr. Grave, I must confess I do find it very difficult to understand why you doctors so very candidly admit, in Latin, Nature's curative intelligence and your own ignorance of it, and yet are so strong in your condemnation of a science that deals understandingly with this force you call 'the healing power of Nature.' Do you not believe, Dr. Grave, it was the understanding of this that enabled the Great Physician to do such speedy healing?"

Dr. Grave said medical science did not presume to meddle with the practice of the Great Physician, whose 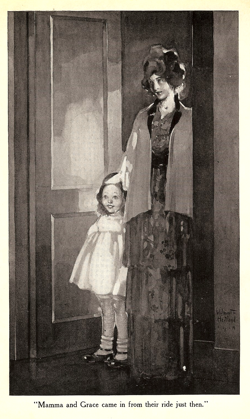 Mamma and Grace came in
from their ride just then.

mission it was to save a world from sin, and it would be well for Aunt Joy to remember that Jesus Christ's healing was done through the direct power of God.

Aunt Joy actually smiled, as she asked Dr. Grave what other power there was but God's. Then she came and stood between Ned and me and laid a hand on each head and said:

"Dr. Grave, we believe that God is the only power, the only intelligence in all this universe. We believe in this ever-present All-power and All-wisdom just as Jesus Christ believed in it. We have found, just as Jesus found, that the kingdom of this power and intelligence is within our own hearts, and there we may learn, as Jesus learned, to know God aright, and his only begotten Son—our immortal self-hood."

Mamma and Grace came in from their ride just then. Dr. Grave couldn't speak when mamma said, "Welcome home, Dr. Grave;" and then, seeing how 'stonished he looked, she said: "I've grown quite independent, you see. We're real glad to see you back, doctor." Then Aunt Joy said: "You see, Dr. Grave, we've had an epidemic of 'spontaneous healing' since you've been away."

Just as Dr. Grave was telling mamma he was delighted to see her about, papa came in. He sent us all off to play, 'cause Grace offered to go 'round with Dr. Grave and help him tell sick folks that "God 'd cure 'em."

Ned asked me if I didn't remember about Aunt Joy's telling papa once, there'd be a resurrection some day; he said he understood what it meant now. So do I; don't you?