WE'VE had some funny things happen to us, Ned and I, 'cause some way, after saying the words Aunt Joy gave us last week, we don't seem to think like we used to.

Papa got after Ned for being seen on the street with Tom Sams, 'cause he's called the baddest boy in town. And papa seemed cross to me, too, cause he saw Janie Smith here the other day, and he told me if I couldn't find a more 'spectable girl to entertain than her, I couldn't have company.

Aunt Joy asked papa to read the sixth chapter of Luke for the morning lesson, and told us to be sure and listen very carefully. So papa read it. I remember most it said, you must love folks that didn't love you, and be good to 'em, and give 'em everything they asked for, and then you'd be called the children of the Highest, 'cause he's kind to the unthankful and evil, and we must be that way, just like our Father is (Luke 6:27). Then papa prayed that we might heed and practice this lesson.

When he was through, Ned went up and put his arms 'round papa's neck and asked him if he didn't want us to be children of the Highest.

'I can have no unkind thoughts, for my Father is Love;'

so I didn't feel a bit cross at him, but just turned and said: 'Now you've taken the trouble to ask, I'll tell you. My third leg grew on a tree and I didn't get the foot.' Then he laughed and called me 'jolly,' and said it was too bad I had to wear a crutch.

"He kept on walking along with me and told me he hoped I wouldn't mind the way he'd talked to me, for he'd got to doin' them things 'cause folks was down on him so, and called him mean, even when he tried to be good. He told me lots of things he'd done, real brave things, but 'cause 'twas him, they said he meant mischief.

"Then I just told him I didn't mind anything he'd ever said to me, 'cause now I knew him I knew he was good, and I loved him. He asked what kind of taffy I was feedin' him. I told him 'twas the kind our Father feeds us all on — love. Then I told him how happy I was now, that I loved everybody.

"He said, 'I believe you; but say, ain't you afraid you're gettin' so good you'll die?'

"Then I laughed, it was so funny, the way he said it, and looked. That was just as you passed, papa, in the carriage with Deacon Jones. I told him folks didn't die of good. And then I couldn't help but tell him all about our lesson

of the seed and flower Aunt Joy gave us. He seemed to understand it, too, for he said if folks 'ud just quit tramping on 'im, he believed the good would sprout in him, too."

Then I told papa why Janie Smith had been here, and how I'd always disliked her at school, 'cause she looked dirty, and how she'd always make faces at me and called me "stuck up," and I'd thought her real mean and told teacher on her. But after I'd said,

some way, I couldn't feel ugly to her any more, but just put out my hand and said, "Janie, let's be friends." She stood and looked at me till I said, "Janie, can't you like me?" and then she just cried and said she always wanted to like me, but I wouldn't let her 'cause she's poor and dirty. Then she told me her mother was always sick, and she did ever'thing herse'f, and couldn't fix up nice and clean, but she'd like to. So I had her come home with me, and Aunt Joy fixed her up in some of my clothes and she looked so nice and happy and good, I wondered how I could ever think she was mean. 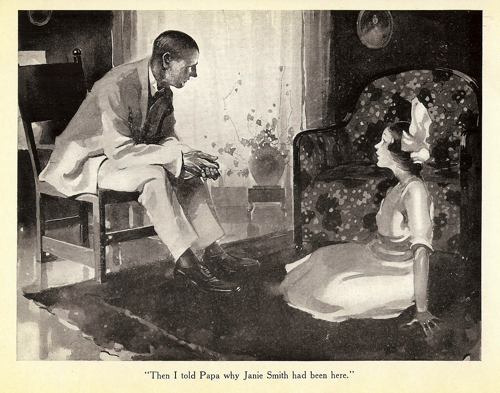 Then I told papa why Janie Smith had been here,

Papa looked like tears; he put his face in his hands and sat awhile, then he said: "I have just read, 'Why call ye me Lord, Lord, and do not the things that I say?' (Luke 6:46). Joy, I stand rebuked by these children. How have you gotten this gospel into such perfect action with them?"

Aunt Joy said, "'Except ye become as one of them, ye cannot know.' (Matt. 18:3). Now, children, give your papa the lesson that has taught you these truths."

So we told Papa all about the seed and flower, and the

words we have said this week. But papa couldn't understand how saying these words could make us do them.

Aunt Joy said, "I told you, brother, 'except ye become as a little child, ye cannot understand these mysteries.'"

Then papa said, "Grace, how can I get little?"

Grace laughed and said: "Oh, papa, you can't make your legs little, or your head little; you des make your finks little."

"Let go all 'e big finks, and keep one little fink, like 'e little f'owers do."

"Well, what think is that?"

"Well, baby, what is my flower, and how can I remember, too?"

"Joy, what is this child trying to get at?" asked papa.

"That everything bringeth forth seed of its kind," said Aunt Joy. "'One is your father, even God. Whosoever is born of God, doth not commit sin; for his seed remaineth in him; and he cannot sin, because he is born of God.' 'Be ye therefore perfect, even as your Father in heaven is perfect.'"

"But, Joy, do you mean to teach these children that they can become like God?"

Father loveth the Son, and showeth him all things that himself doeth.' (John 5:23). 'I and the Father are one,' said Jesus. And we are told, 'Let this mind be in you, which was in Christ Jesus, who, being in the form of God, thought it not robbery to be equal with God' (Phil. 2:6)."

"But you must remember the same authority says, 'He took upon himself the form of a servant, and was made in the likeness of men, and became obedient unto death' (Phil 2:8)"

"Yes, God created man in his own image, and pronounced him good. 'The Word was made flesh,' and the Father said, 'This is my beloved Son, in whom I am well pleased,' manifest man, working as the Father worketh. 'As the Father hath life in himself, so hath he given the Son life in himself.' To prove the truth of this, Jesus Christ laid down his manifest life, and took it up again, and declared to all, 'He that hath the Son hath life.'"

"What do you understand that to mean?"

"The same as 'the light that lighteth' — Being — what Grace calls the 'know.' 'No man cometh unto the Father but by me [the Son].' 'Because I live, ye shall live also; at that day ye shall know that I am in my Father, and ye in me, and I in you.' 'That day' always means the time of realization."

"What makes you think you're good?"

Cause I think everybody's good, and I'm one of 'em."

"What! when they do bad things?"

"Well, we thought Tom and Janie were mean and bad till we knew em, and I guess it would be just the same with everybody, when we come to know 'em."

Aunt Joy said, "'He that walketh righteously and speaketh uprightly, and shutteth his eyes from seeing evil, shall dwell on high' (Isa. 33:15)."

Papa said, "Joy, the results of your teaching are beautiful. Still, I can't help fearing these children are getting loose ideas of Christ and God."

"Jesus told you to judge of a tree by its fruits," said Aunt Joy. "Here you say the fruits are figs, but you fear the tree is a thistle. 'Do men gather figs of thistles?" Come, what is the fruit of your thinking? Suspicious of your own children, even when they are fulfilling the only law Christ recognized — love! Fearing to claim kinship with the beloved Son, when it is declared, 'He that abideth in the doctrine of Christ, he hath both the Father and the Son' (II John 1:9). Also, 'We are in Him that is true, even in his Son, Jesus Christ' (I John 5:20). This is the true God, and eternal life."

"Grace," said papa, "who is the true God and Jesus Christ?"

"Oh," said Grace, pointing, "He's here and ever'where, and he lives in 'e happy little spot right in 'ere, and nuffin' can get 'e happy out or hurt Grace, 'cause the 'little know' sees 'im all the time. 'E 'little know' is Jesus the Son — des like 'e seed's know."