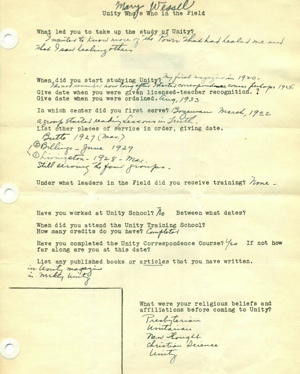 What led you to take up the study of Unity? I wanted to know more of the Power that had headed me and that I saw healing others.

When did you start studying Unity? My first magazine in 1920. I do not remember how long after I started the correspondence course, perhaps: 1924

Under what leaders in the Field did you receive training?
None

Have you worked at Unity School?
No
When did you attend Unity Training School?
How many credits to you have?
Completed

Have you completed the Unity Correspondence Course?
Yes

List any published books or articles that you have written.
in Unity magazine
in Weekly Unity

What were your religious beliefs and affiliations before coming to Unity?
Presbyterian
Unitarian
New Thought
Christian Science
Unity

Doctors said "mastoid" and said must operate at once but marveled my year old daughter had no fears. I said "The presence of God in you is your health and wholeness." I realized it and on the third day saw the appearance disappear.

My seven year old son came home from school and said "mother, what's mumps? The nurse says I have mumps." "Its nothing, son," I answered. "We believe in the presence of God, our health." Together we realized his health. Four hours later the health officer came to put up a sign and upon examination sputtered at the nurse's mistake. No sign put up and the boy went back to school. We had realized health for all the children and two days later the newspapers announced a sudden abatement in this disease for which the doctors could not account.


Clip #26 from May Rowland Healing Workshop.
May talks about Mary Wessel.

One of my most thrilling moments was when I realized I could do something about it. I did not need to die with tuberculosis. Nine months later I was pronounced "healed." This message was given me "Let the weak say, I am strong."