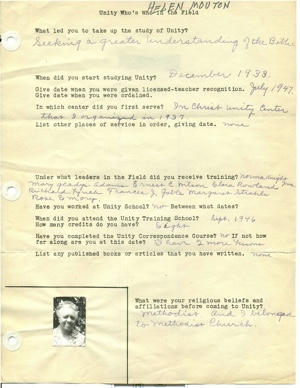 Here is the 1948 Field Department Survey for Helen Mouton, who pioneered Christ Unity Center in Los Angeles (now KRST Unity Center of AfRaKan Spiritual Science) in 1937 before becoming a Licensed Unity Teacher in 1947 and continuing her studies to become an Ordained Minister in 1952. A history on the current church website says that Rev. Helen Mouton served as minister until 1960 when Rev. Trudie Liddell took over.

Helen Mouton started studying Unity in December 1933. At some point she received training from Norma Knight Jones, Mary Gladys Adams, Ernest C. Wilson, Clara Rowland, Richard Lynch, Frances J. Gable, Margaret Stahle and Rose Emory. She attended the Unity Training School in 1946 and earned eight credits. She had two lessons to complete in the Unity Correspondence Course when she submitted this survey. Prior to studying Unity, Helen Mouton was a Methodist and belonged to the Methodist Church. Helen Mouton is mentioned in The Book of Ruth, a biography of Ruth Mosley by Vertell Allison-Talifero.

My husband was healed and lived 7 years after his healing, but could not overcome old habits.

A young lady was healed through prayer in 1946 and is doing fine. Healed of gland trouble in the throat. She is now married and my next door neighbor.

Here is her inspiring story of the founding of Christ Unity Church,

Well my greatest event was the vision I got during the Silence 22 of October in 1938. Spirit gave me the vision of doing this work. Also vision of a temple and a home. I immediately started to do something about it. Sent to Unity for application blank to start in Correspondence Course [and] a few days later I met Dr. Jones and she invited me to start with them. So I did and finished with them.

And then [I] took up the Correspondence Course. [I] would have completed it this year but over-work caused me to have to let go so I just kept up my home Center work and hope to get my 2 lessons by June to get my license renewed. I know God is my constant companion. [I] had also a vision to move and buy so in 2 months after I had the vision we were in this place. And we just stepped out in faith with no money in sight. We think it is marvelous.