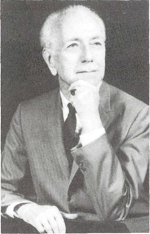 Ernest C. Wilson was born in Fargo, North Dakota, and ordained a minister in 1916. He was known internationally as a lecturer, writer, and a leader. His ministry began in San Diego, then Galveston, moving then to Minneapolis, and from there, to the Cleveland Unity Center until, in 1927 he became editor of Unity School's YOUTH Magazine. He quickly moved up to editor-in-chief of all Unity publications while serving as senior minister for Unity Society from 1934 to 1938. In 1939 Ernest furthered the Unity work on the West Coast by founding Christ Church, Unity in Los Angeles. He returned to Kansas City once again in 1965 and served the Plaza Church until his retirement in 1976. During his tenure of service to Unity he wrote seventeen books, compiled many poems and articles, introducing the Master Class Lessons in 1932. He originated Unity's Christmas Candlelighting and Easter Flower services. Even with all this, he spoke daily on radio and became a celebrated television pioneer.

Throughout his career Doctor Wilson made many friends, many famous, all unforgettable. Many are in this book. In the approximately two years before his transition, he spent a good part of each day writing about these friends, writing these memoirs, remembrances of people he had known, interesting and humorous anecdotes about happenings as he saw them and lived them. The love of countless friends is blessing the soul of this inspirational man who shared the Unity way of life with so many people.

From the inside jacket of: If You Want To Enough - A Book of Memoirs by Ernest Wilson

Read more about Ernest Wilson in Ponderings, A Visit With Dr. Catherine Ponder. 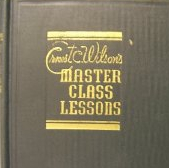 Go always first direct to God;
go next to man as God directs.
Have faith.
Pray all the way through.