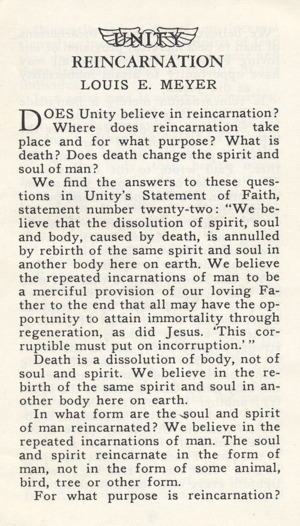 DOES Unity believe in reincarnation? Where does reincarnation take place and for what purpose? What is death? Does death change the spirit and soul of man?

We find the answers to these questions in Unity's Statement of Faith, statement number twenty-two: "We believe that the dissolution of spirit, soul and body, caused by death, is annulled by rebirth of the same spirit and soul in another body here on earth. We believe the repeated incarnations of man to be a merciful provision of our loving Father to the end that all may have the opportunity to attain immortality through regeneration, as did Jesus. 'This corruptible must put on incorruption.' "

Death is a dissolution of body, not of soul and spirit. We believe in the rebirth of the same spirit and soul in another body here on earth.

For what purpose is reincarnation?

"We believe the repeated incarnations of man to be a merciful provision of our loving Father to the end that all may have opportunity to attain immortality ... as did Jesus."

Is reincarnation merely a man-made theory, a pleasing philosophy of life, or is it ordained of God? "We believe the repeated incarnations of man to be a merciful provision of our loving Father." Paul wrote to the Corinthians: "For this corruptible must put on in-corruption, and this mortal must put on immortality."

"Then shall be brought to pass the saying that is written, Death is swallowed up in victory." God's plan is ultimate salvation for every man.

We can readily believe that "all men are created equal" but not born equal. Here is a child born in a crippled body, another in the midst of poverty, while yet another child is born into a strong, healthy body, and in the midst of wealth. One is born as one among many brothers and sisters; another is the only child. One is born in the country; another in the city. One is born in the wilds of Africa; another in highest civilization. Outwardly there is little evidence of equality, but inwardly in the soul of each one dwells the Spirit of God. "That was the true Light, which lighteth every man that cometh into the world."

Generation after generation, incarnation after incarnation, the Spirit of God that dwells in every man rises more and more into ascendancy in the life of the individual.

In a sense man is always incarnating. As old thoughts and ways give way to new thoughts and ways new forms are produced. When the belief in sickness is replaced by faith in God as health within the body, then health comes forth. Paul said: "I die daily." It is evident that he did not mean total death but death to some erroneous belief. With the passing of a wrong belief, there is born the right belief. We put off the old by putting on the new in heart and mind.

Reincarnation replaces the old belief in condemnation and damnation by the faith of the everlasting mercy and forgiveness of God. Our almighty God and Father of infinite wisdom and love cannot change His character, and place His own creation in a state of hell to be eternally tormented. A loving earthly father would not place his son in a place of torment for the mistakes he makes. Neither does our heavenly Father condemn or punish His children. "For God sent not his Son into the world to condemn the world; but that the world through him might be saved." "If a son shall ask bread of any of you that is a father, will he give him a stone? or if he ask a fish will he for a fish give him a serpent? Or if he shall ask an egg, will he offer him a scorpion? If ye then, being evil [not yet of highest illumination and love], know how to give good gifts unto your children: how much more shall your heavenly Father give the Holy Spirit to them that ask him?"

Suppose when a child grows to the age of responsibility the father gives him a year to live as he thinks he should and if he fails the father proceeds to punish him for the rest of his life. What is a year, or even three-score and ten years as compared with eternity? As children of God we are created to live forever. Suppose your child does make mistakes. Do you want always to be punishing him or do you want to help him gain an understanding of how to live without making mistakes? Can your love be greater than the love of God?

Unity does not make reincarnation an excuse for failing to live to the highest of our understanding here and now. Rather, we believe that when the soul understands the plan of God it lives according to its understanding. Unity accepts reincarnation as a fact in human experience. We do not believe that it is necessary in the life and experience of Christ, the Son of God. In Christ there is no need for reincarnation, for Christ there is no death. Death is a penalty for broken law: "For the wages of sin is death; but the gift of God is eternal life through Jesus Christ our Lord." Jesus broke no laws. He fulfilled the law. "Think not that I am come to destroy the law, or the prophets: I am not come to destroy, but to fulfill."

Reincarnation gives to the soul and spirit of the man who sins or makes mistakes repeated opportunities, until he learns to live in conformity with God's law. When man learns to live and apply the truth as did Jesus Christ then the necessity for reincarnation will be done away with. He will have learned to live without dying.

If we have lived before, why do we not remember our former existence? We are playing different parts on the stage of life. There are certain things we know in this life without having learned them in this life. There are other things which we have to master that others about us have overcome. Should it be necessary for us to remember how we lived before, it will be brought to our remembrance. Jesus came to the place where He said: "Verily, verily, I say unto you, Before Abraham was, I am." And again he said: "And now, O Father, glorify thou me with thine own self with the glory which I had with thee before the world was."

In his book The Twelve Powers of Man, Charles Fillmore says: "Genius is the breaking forth of the accumulated achievements of a soul in that field of activity for which it has been very zealous in many incarnations." Mozart at the age of four played the organ without instruction. Where did he get such marvelous musical ability? A history of his soul would show that he had cultivated music for ages, carrying from one incarnation to another his zeal for the harmony of sound, until he became the very soul of music.

Mr. Fillmore also says: "The genius of Shakespeare was the accumulated experience of a soul that had been poet and philosopher since the 'morning stars sang together.'

"Let no man think that he can retire from living. Do not shirk the responsibilities of life. You have made them and you can unmake them. A way of escape has been provided for every one of us. That way is to overcome the soul's mistakes by incorporating into mind and heart the attributes of the Christ Mind."

Did Jesus give any evidence that He believed in reincarnation? Malachi, the last of the Old Testament prophets, prophesied the reincarnation of the prophet Elijah: "Behold, I will send you Elijah the prophet before the coming of . . . the LORD," "And his disciples asked him, saying, Why then say the scribes that Elias [Elijah] must first come? And Jesus answered and said unto them, Elias truly shall first come, and restore all things. But I say unto you, That Elias is come already, and they knew him not. . . . Then the disciples understood that he spake unto them of John the Baptist."

In his book The Twelve Powers of Man, Charles Fillmore says: "Elijah had intellectual illumination, and the Israelites were taught that he would come again as a forerunner of the Messiah. Jesus said that Elijah had come again in the personality of John the Baptist."

That reincarnation was believed in and accepted by Jesus and His disciples is revealed in the answer the disciples gave to Jesus' question: "Whom do men say that I the Son of man am? And they said, Some say that thou art John the Baptist; some, Elias; and others Jeremias, or one of the prophets." That reincarnation was generally believed is also shown in Herod's words: "Now Herod the tetrarch heard of all that was done by him: and he was perplexed, because that it was said of some, that John was risen from the dead; and of some, that Elias had appeared; and of others, that one of the old prophets was risen again."

Though the theory of reincarnation is a rather new concept in the Western world, it has been accepted in the Eastern world for many centuries. We need to remember that our Scriptures have come out of this world.

"When the body is destroyed . . . the spiritual ego reverts to its original essence in the bosom of the Father; soul falls asleep until the next incarnation." How long before the soul reincarnates? It depends on how vital and awake is the soul and how eager it is for life. How long do we sleep at night if we have opportunity? Until we are fully rested and ready for the new day's activities. So it is with the soul. It rests until it is renewed, revitalized, and made ready for its new day's experience.

"The goal of man is eternal life, and in each incarnation that goal is brought nearer if Spirit is given an opportunity to express itself. When this is done, the true spiritual body will replace the physical body and all men will become like Jesus Christ."

Not reincarnation, but eternal life is the goal.