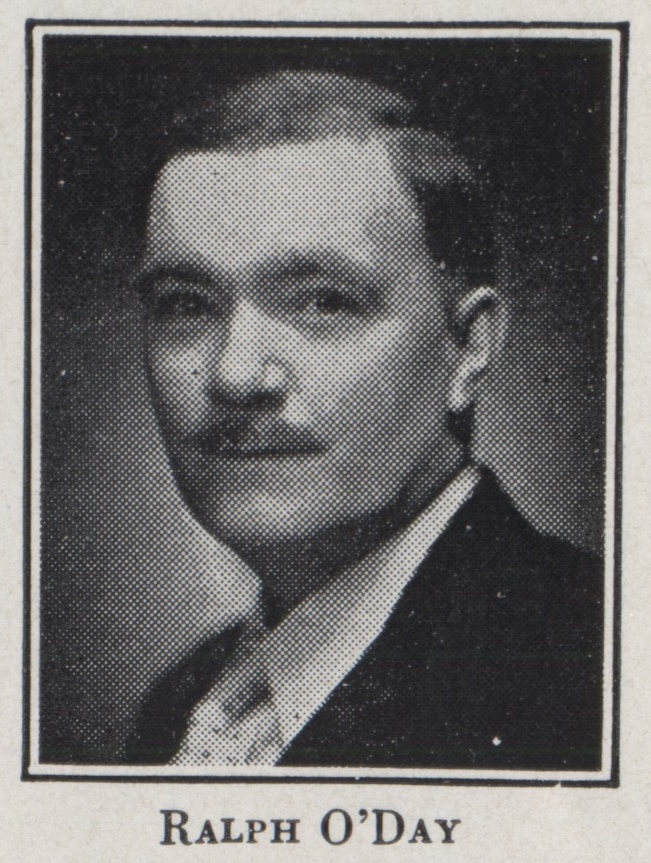 Ralph O'Day was ordained a minister in 1937. He is listed in the 1946 Unity Annual Conference yearbook as serving on the Executive Committee for the Annual Conference and also serving at Akron Unity Center of Truth, 34 S. High St.

According to a profile on Ancestry.com (Rootsweb), RALPH O'DAY was born ALBERT ELDON SELLERS 7 December 1889 in Danville, Indiana, eldest child of William J. Seller(s) and Nancy Louvesta (Ellis) Sellers. He assumed the identity of Ralph O'Day in (approx.) 1927.

He attended public schools in Frankfort, Kentucky until 1900, when the family moved to Brookville, Indiana. The events surrounding his parents' divorce in 1908 required him to go to work, following his junior year in high school, to support his mother and sister. He returned to school in 1910, to complete his senior year at Hanover Academy, on the campus of Hanover College in Indiana. He continued as a student at Hanover, graduating in 1915 with degrees in English and History.

Albert enlisted in the Army on 3 September 1917. He served overseas during the autumn of 1918, returned home in December and was discharged on 16 January 1919.

He married ANNA FLORENCE (HAYDEN) KORNER [divorced William Korner] 12 December 1919 in Oxford, Ohio. Albert was a high school teacher in Oxford, and lived at 212 South College Ave. Albert and Anna had three children of their own, in addition to two from her previous marriage. While living in Oxford with his family during the early 1920s, Albert spent time working overseas. The exact nature of the work is not known, but it was, in the words of his mother, "very secret work, and his life was in danger." Albert Eldon Sellers disappeared from Ohio in 1927. His family continued to live in Oxford.

He married EMMA LOUISE EKSTROM 30 April 1934 in Clearwater, Florida, and they moved to Kansas City, Missouri, where he was on the faculty of the Unity School of Christianity, as Dr. Ralph O'Day. Ralph and Louise had one child.

In 1939 he became Unity minister in St. Joseph, Missouri, where he served for three years. He moved to Akron, Ohio in 1942 to become Unity minister there. During this time he traveled extensively as a guest speaker at Unity Centers across the country. In December 1945 he suddenly left Ohio and moved with his family to a farm near the small town of Dunnellon, Florida. Ralph and Louise moved to St. Petersburg in 1956, where he lived until his death in April 1962