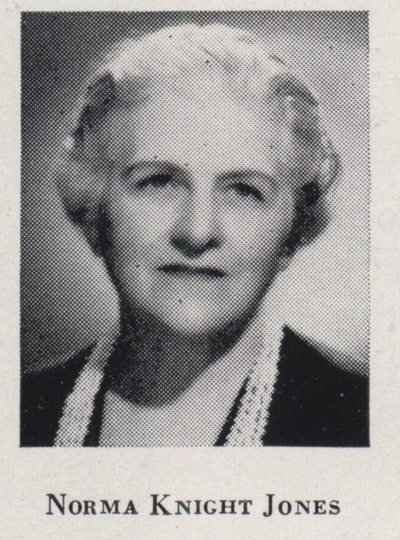 Norma Knight Jones was ordained a minister in 1941.

She had been a prominent socialite in Kansas City, accustomed to a modest degree of wealth, a friend of many of the leading lights in Kansas City. Then came the stock market crash of 1929-1932. Her husband lost all his money and had become a bed-ridden invalid. All that was left to them was an old broken down farm near Eskridge, Kansas, where Norma became the bread winner. Their daughter and two sons were grown, either in college or out of it and starting their own life patterns. Norma directed the cultivation of the crops, prepared meals for the harvesters in season, baked her own bread and pastries, made up crossword puzzles which she and her younger son, home on weekends, contrived and sold for publication. She raised squabs too, and when she had a book review or two scheduled for some church or club in the city, she’d have the hired man put a crate of squabs in the back of the old jalopy, would put on her three best things, and with books under her arm, white gloves ready to put on in town, drop off squabs at The Kansas City Club, and resuming the manner and posture of her precrash affluence, charm some church or club out of a well-earned fee.

During the long months preceding her husband’s transition, Norma had no doubt given thought to what course her life would take from then on. She had been a speaker for the Democratic Party until Roosevelt ordered farmers to kill their pigs. This she could not abide. She became a Republican albeit a not too enthusiastic one. She decided to complete the required courses and gained credentials as a Unity teacher. As such, after a week’s engagement in Rochester, New York, she was assigned to substitute for Lily Stack, leader of a Unity center in Pasadena, California.

She had a special aptitude for (counseling) ministry. When you talked with her she would listen. She made you feel that what you had to say was of the greatest importance.

Sometimes her counselling took surprising turns, as she confided to me from time to time. There was one woman who came to her with demands for answers to all sorts of ephemeral notions—to debate the “is-ness of the which.”

Her patience wearing thin, Norma declared, “My dear, I think you are splitting hairs.”

“Why, how did you know? That’s what I wanted your prayers for. My hair splits!”

Another counselee confessed, “You know I’m a Catholic. I’m wondering what the Church will think of my coming to Unity.” “Why don’t you ask the Father next time you’re at confession?” She was back a week later. “Did you ask the Father what he thought about your coming here?” “Yes, and he said, ‘Why daughter, I read Daily Word myself.’ ”

Norma was the most entertaining Bible teacher I’ve ever heard. The Bible Study Class which she initiated in our Sunday School (for a time called The Business Women’s Bible Class, until so many men began coming to it that we changed the name) reached an attendance of five hundred members, and when we attained a church building of our own, crowded the balcony of the church. When she spoke about Bible characters at Sunday morning services, her description seemed to populate the chancel. “You could almost see the men and women she was talking about, there with her, or walking down the aisles,” one enthusiastic business man one time exclaimed.

She had certain little foibles of speech that were probably due to the fact that most of her literary proficiency was acquired by extensive reading rather than from academic training. Library always came out libary. February was Febuary. Candle became cannel. Fredericka Singleton, a friend and member of the staff whom Norma saw almost daily, became Freddie Singlington, May Butterworth whom she saw only rarely and fortunately never had to introduce, became Mrs. Butterfingers or Butterstick. Franklyn was concerned when Norma happily announced that the author, Stella Terrill Mann, for whom I had written forwards for two books, was to be guest speaker at our Business Women’s class. Norma, as sponsor, would of course introduce her.

“What she could do with that name!” Franklyn exclaimed to me. “Couldn’t you go over it with her a few times?” I did.

“Thank you, dear,” Norma responded. “You know how I am about names. I’ll practice saying it, so I’ll be sure to get it right.” Franklyn was not reassured. “I know The Lord’s Prayer better than anything else I sing, yet I always feel better if I have the words before me.”

His forebodings were justified. With great eclat Lady Norma introduced her guest as Telia Sterrill Mann!”

After the meeting I couldn’t resist asking Norma, “Just what do you tell a sterile man?”

“Oh, did I say that?” she exclaimed, laughing.

It never seemed to bother her to have these little ideosyncrasies brought to her attention—nor for that matter did it change her. Doing a radio program near Christmas time, in closing she suddenly realized that she hadn’t wished listeners a happy holiday, and exclaimed, “Happy Hollywood, everybody!”

We used to check up on one another’s speech habits on radio, and at one point felt that Norma didn’t sound like herself—more as if she were imitating someone else, and we’d had some comment on it. “It’s probably unconscious on her part. Let’s not mention it. Instead, let’s invite her to hear a playback, and she’ll undoubtedly be aware of it.” Instead, she beamed with delight, “Why, I sound just like Jane Cowl!” We almost agreed.

Speaking at church, when she was about to make a humorous remark it would be signalled to listeners by the gesture of raising one hand to touch her cheek. Her fans would squirm with delight, awaiting the bon mot to follow. She enjoyed her own discourses, and her pleasure came back multiplied from her listeners.

One time in a midweek service, while Franklyn was singing, I saw a stricken look come over her face. As soon as the service was over I hastened to ask what caused it. “I think I left some eggs boiling on the gas range at home,” she confessed.

She loved to cook, but her appetite for reading would divert her attention from culinary activities, and she would be alerted—-too late—by billows of smoke emerging from the kitchen.

We went home with her to see what damage had been done. Even in the entry the acrid odor of sulphur assaulted us. The eggs had exploded, egg yoke was splattered on the walls, and the bottom of the container had burned through. We all burst into gales of laughter, rushed to open windows, start a fan going. Norma said, “Don’t go. I’ll put some coffee on, and we’ll drink it in the livingroom. I’ll get this all cleaned up in the morning.”

She had an occasion to visit Kansas City, and decided to go by plane, her first trip by air since plane service was quite new. She was full of anecdotes when she returned. Necklaces of large, white beads were fashionable at that time. Midway through her trip home the necklace she was wearing broke. Holding some of the beads in one out-stretched hand, she was groping for others, when a stewardess came by. “Oh, let me get you some water for your pills!” she exclaimed. Norma’s delight overshadowed her chagrin at the accident.

She had a sister, Elvessa Knight Luther, who was a fashionable millinery designer, who came to visit her and presented her with a modish hat, and was later horrified to discover Norma wearing it back end to, and screamed out her disapproval. “I’ll have to wear it her way while she’s here, but I like it my way better,” Norma confided to me.

Counselling with people every day, as she did, I would often hear her summarizing a telephone treatment, “Now let us just know—.” When she herself contracted the flu and spent a few days in the hospital, I went to see her. She was uncomfortable, more than half asleep as I approached her bed with the greeting, “Hi, Lady Normie, how’re you doing?” (Always the light touch to things.) Her response came right out of her counselling: “Now let us just know—.”

Norma loved to entertain people, even when her physical energies began to wane, but you could always tell, if you knew her well, when she thought it was time to disperse. Without a word or outward sign, it was just as if a curtain had been pulled down. Somewhat to our amusement, all of us who were closest to her recognized this, and we would begin to say our farewells.

Sometimes old-time memories would assert themselves in Norma. She would work them out by baking a batch of bread or making some homemade ice cream. Apart from such special indulgences she could prepare a meal in record time, would join ys at the table, face flushed from her activities, survey the food on our plates and exclaim, “Isn’t this the best nim-nim (an expression derived from her children’s early days) that you ever did see?” with obvious pleasure in the accomplishment. 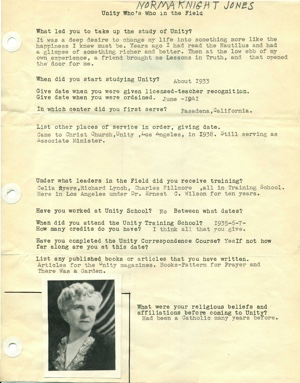