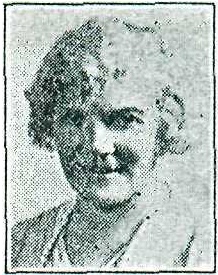 Lily Stack was ordained a minister in 1933.

From an undated newspaper article in the Unity Archives:

Lily Stack, of the Pasadena Unity Center, was born on the European continent, and owing to the fact that her people were in the diplomatic service, she has lived in most of the civilized countries of the world. She spoke at least three languages before she learned English. She has a deep reverence for old-world religion and knowledge, and has had the privilege of contacting and studying under many of the greatest living teachers of metaphysics and philosophy.

In spite of her extensive travels Mrs. Stack has spent more than half her life in America, and for some years she was a teacher in the public schools of California. Of late years all her interest has been centered in metaphysics, and one of her cherished desires—also a desire of Charles Fillmore’s—is to make the theater, the legitimate stage and the screen, a medium for the teaching of Truth.

Mrs. Stack has devoted much study to the Bible, and has conducted study classes in the symbolical interpretation of both the Old and the New Testament. Her reiterated statement is that Unity, the newer interpretation of the simple teaching of Jesus Christ, if deeply studied and truly lived, will overcome every wrong condition of human life. Mrs. Stack was ordained a Unity minister by Charles Fillmore in August, 1933, at Unity Farm.

Ernest Wilson writes in his autobiography that Lily Stack was the “leader of a Unity center in Pasadena, California. Lily wanted to take a sabbatical leave of absence with her actor husband (Will) who had performed in England and acquired such an accent that in Hollywood he was accepted as an English actor, notably in a role as Garbo’s husband.”

Lily Stack is listed in the June 1912 Unity magazine as the leader at: Mrs. Lily Slack, Haymarket, 6, London, England.