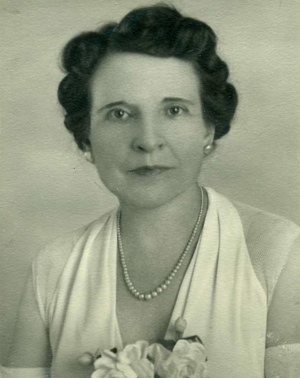 The following story is from several sources circulated on the Internet in 2010. The source is not clear.

Some years ago, Louise Beaty was a dynamic and active Unity minister with a large congregation in St. Petersburg, Florida. As a young woman, she had been given up by doctors as a hopeless cripple who would never walk. But through faith and gradually understanding, she experienced healing. She did walk again but she still had a slight limp. She loved to teach healing, but sometimes she was questioned as to her right to teach healing since she still limped. She would remind people that the bible story tells how Jesus still had the nail prints when he appeared before the disciples after his resurrection and how they confirmed to Thomas that it was indeed him. Louise would say, “My limp is my nail print”. Her healing was real because she could indeed walk again. But her limp was a reminder of what she had experienced and how great her understanding had grown. She would say that she liked to think of her scars as life-experience-tattoos – nothing more than that but revealing of how far she had come in her understanding.

Louise Coffey Beaty was born in Denver, Colorado. As a child, she was confined to her bed or crutches and braces due to tuberculosis of the hip joint. She was left with permanent limp when finally she laid aside her cane during high school. She once remarked, "This limp has taught me compassion. If I didn't have it, I might forget how wonderful God has been to me." She credited those long hours of confinement with her love of studying and her illness with piquing her interest in philosophy and religion. 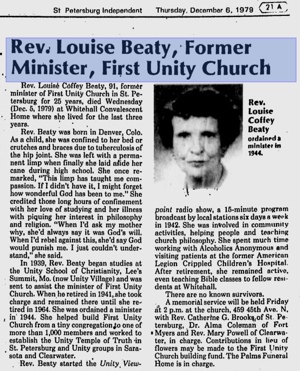 "When I'd ask my mother why, she'd always say it was God's will. When I'd rebel against this, she'd say God would punish me. I just couldn't understand," she said.

In 1939, Rev. Beatty began studies at the Unity School of Christianity, Lee's Summit, Missouri, now Unity Village and was sent to assist with the minister of First Unity Church. When he retired in 1941, she took charge and remained there until she retired in 1964. She was ordained a minister in 1944. She helped to build the First Unity Church from a tiny congregation to one of more than 1,000 members and worked to establish the Unity Temple of Truth in St. Petersburg and Unity groups in Sarasota and Clearwater.

Rev. Beatty started the Unity Viewpoint radio show, a 15-minute program broadcast by local stations six days a week in 1942. She was involved in community activities, helping people and teaching church philosophy. She spent much time working with Alcoholics Anonymous and visiting patients at the former American Legion Crippled Children's Hospital. After retirement, she remained active, even teaching Bible classes to fellow students at Whitehall.

There are no known survivors.

Her memorial service will be held Friday at 2 PM at the church, 459 45th Ave. North with Rev. Catherine G Brooks of St. Petersburg, Dr. Alma Coleman of Fort Myers and Rev. Mary Powell of Clearwater, in charge. Contributions in lieu of flowers may be made to the First Unity Church building fund. The Palms Funeral home is in charge.

The following is from a Boston University profile of Theodore Lockhart, a United Methodist minister from St. Petersburg:

Lockhart’s career as a United Methodist minister spanned four decades and saw historic changes in the church and in American society. But it started out with a challenge that helped shape the course of his life. Methodist Church officials offered to support Lockhart, newly discharged from the military, in his spiritual journey and encouraged him to apply to Boston University with the promise of financial aid. Once he was accepted, however, the funds fell through. He got by at BU on his earnings from a summer job, but when the money ran out, he told his mother he was coming home. Intending to take out a second mortgage on her house, Vivian Lockhart asked Rev. Louise Beaty, the white minister of First Unity Church in St. Petersburg, for a reference to the bank. Instead, Beaty wrote a check. When Lockhart met Beaty for the first time at a church service over Christmas break, “she smiled and gave me a wink,” Lockhart wrote in a presentation to St. Petersburg College students. “Imagine that, a white woman and black man exchanging smiling winks in the days of Jim Crow segregation!”