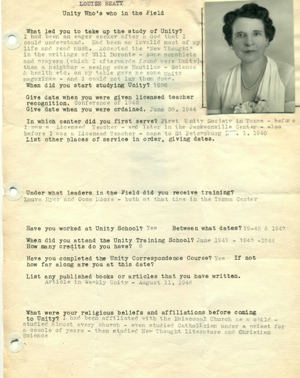 What led you to take up the study of Unity?
I had been an eager seeker after a God that I could understand. Had been an invalid most of my life and read much. Accepted the "New Thought" in the writings of Will Durante - some pamphlets and prayers (which I afterwards found were Unity) then a neighbor - seeing some Nautilus - Science & health etc. on my table gave me some Unity magazines - and I could not lay them down.

When did you start studying Unity?
1926

Under what leaders in the Field did you receive training?
Laura Hyer and Ocoa Moore - both at that time in the Tampa Center

Have you completed the Unity Correspondence Course?
Yes

List any published books or articles that you have written.
Article in Weekly Unity - August 11, 1946

What were your religious beliefs and affiliations before coming to Unity?
I had been affiliated with the Episcopal Church as a child - studied almost every church - even studied Catholicism under a priest for a couple of years - then studied New Thought literature and Christian Science.

After being an invalid - walking on crutches most of my life - I feel that my acceptance of Truth - and most especially Unity brought me a healing. I was never out from under the doctor's care - and since I have been in Unity I am well and strong and have never been to a doctor except to be examined for life insurance. We have had so many healings through the prayers of our group here that I could not list them - one an infant healed within three days of Leukemia - another an infant healed of polio (both of whom are now five and six years old and very active members of our Sunday School). A woman - struck blind with Glaucoma and both irises removed - now sees, reads, sews etc. I accepted that promise "I will restore unto you the years that the locust hath eaten" - and although my finances had been sorely depleted and I came to a small, run-down church - God surely has kept that promise. My own affairs have prospered - money that I knew nothing of but that belonged to me - came to me when I needed it — the Church's prospered and the attendance increased from a congregation of about thirty-five in the wintertime (and no services in the summer at all) to about seven hundred and fifty in the winter and two hundred through the summer months. We own beautiful lots on which to build, have a fine organ and a beautiful piano - a goodly sum in our building fund. I own my home jointly with a young woman in the Church - have my own car. The story of how I got this home is almost unbelievable - it is the home God gave to me - all legitimate. It seems to me my needs are met before I know they exist.