THIS PAGE IS UNDER CONSTRUCTION. MAY 2015.

The Unity Center of Practical Christianity in New York City was founded by Georgiana Tree West in 1936. She was ordained a Unity minister in 1935. She authored many popular articles and books for Unity expressing the teachings in a clear and practical way. Georgiana was the Minister at The Center until 1959, when she was succeeded by another well-known Unity Minister: popular author and poet, J. Sig Paulson, from 1959 to 1961. One other distinguished Unity Minister who served in New York City was Richard Lynch, who wrote many best-selling books on Unity Metaphysics. Source: Unity Center of NYC 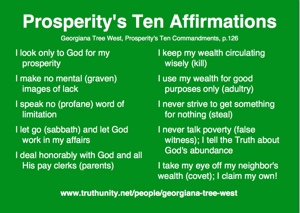 Click here to order some of these 3x5 cards.